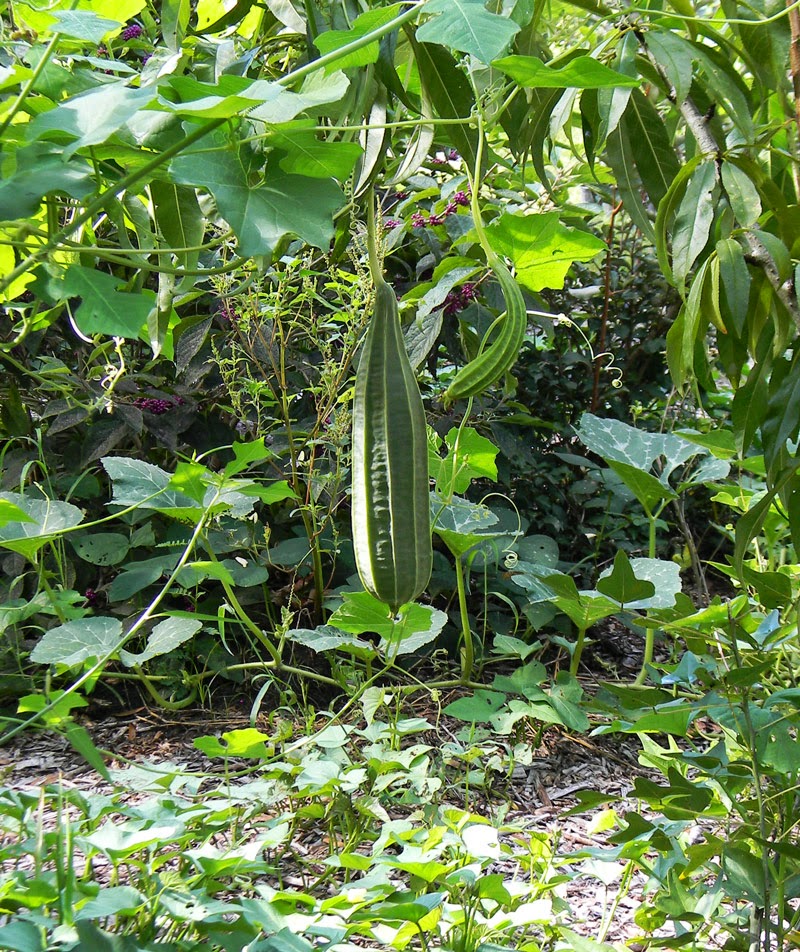 Almost 10 years ago I was given a packet of “loofah” seeds. I planted them and ended up with heavily-ridged loofahs that were almost completely impossible to clean for use as sponges/scrubbers.

The netting was good inside… but getting the skins off? No process worked. I tried boiling water, letting them rot, drying, waiting until they were dry on the vine, picking them early, scraping with a knife… nothing worked.

I did some more research and discovered that my “loofahs” weren’t loofahs. I was actually growing angle gourds.

This is an easy mistake. Both are loofahs… but only one is good for sponge-making. If you’re growing angle gourds for sponges, you’ll be quite disappointed.

After growing them once in Tennessee and once in Florida, I gave up.

The thing is, angle gourds don’t give up as easy as I do. I threw some old ones in the compost pile in my food forest… and lookie here: Since angle gourds are very persistent despite the heat and humidity, I decided to try the young fruits and see if they were tasty. The smell has put me off in the past: they have this rank green odor when the fruit and leaves are broken – yet to my surprise, the cooked young fruit are delicious and sweet… though they really do look strange.

They remind me of the Hindenburg. The flavor: angle gourds taste like the best of a zucchini mixed with a cucumber. Very good!

Since I haven’t done well with either zucchini or cucumbers during Florida’s summers, I think that growing angle gourds will play a big part in my future gardening plans. Since I’ve had them self-seed more than once, it may just be that I can scatter the seeds here and there and let them find their own way in the food forest. That’s what they’re doing this year, so why not?

Now that I’ve tasted them and found them delicious, angle gourds now get the green light to ramble as far as they’d like.

I got my first tattoo!!!
Lots and lots of promise in the food forest
Survival Plant Profile: Corn
Florida Gardening in August
The Big Potato Bed Of Huge Potatoeyness
angle gourdloofah
7 comments
PinterestWhatsappEmail

Planting a Food Forest for FREE!

The other day I took an angle gourd and pickled it in fermented bread and butter pickle brine. The kids and I think they're tasty.

Oh wow!!!! One of the farmers at my farmers market grows these! She's from French Guyana and grows and sells all kinds of crazy stuff. You have emboldened me, sir. Now I have to buy one from her and try and it. Have you tried bottle gourd yet? It's also called lauki- Lagenaria siceraria. It also grows like crazy and tastes like a mild zucchini.

I've tried growing birdhouse gourds a few times – I think they're the same species. I wanted them for the dried gourds but they've invariably rotted on me thus far. Never tried the green ones… now there's a good idea.

Recently ran across a makeshift garden in the back of a gas-station-that-wasn’t-a-gas-station ran by an indian couple. I thought I could recognize the leaves of the vine in the backyard, as I’ve recently been researching them – I was right, it was the Coccinia grandis! She also was growing this, the Loofa.

Anyway, so far as my research shows, the loofa is almost as much of a weed as the ivy gourd – any reason you don’t have it in the survival plant profiles? Or have any more information on it?

Hey – nice find on the perennial cukes. I love those things.

The loofah does come back now and again, but it’s also an annual without the big roots that preserve the ivy gourd from year to year.

We never really experimented with loofah/angle gourd enough to write up a proper survival plant profile. Maybe in a few years. I need to grow them again.