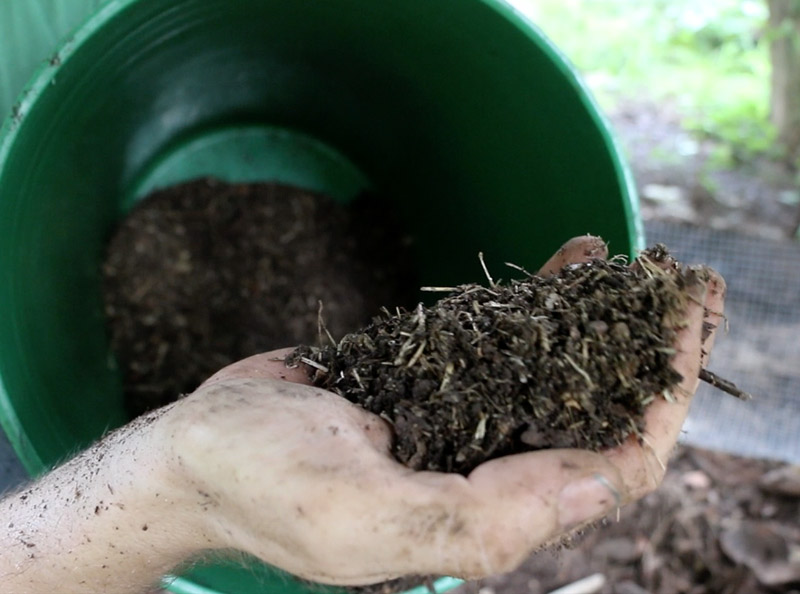 Paul Gautschi of Back to Eden fame has a method of composting where he throws food scraps and garden waste into his chicken run and lets the birds eat and till and manure it down. Then he takes a wheelbarrow and sifter out and harvests the rich compost/soil in his chicken run and throws it on his gardens.

I have done the same for the last few years and find it works wonderfully.

In a video I posted this morning you can see how I’m using this Back to Eden garden method to make plenty of the good stuff.

It’s really simple and doesn’t take much thought. I’ll share how I do it, then you can tweak in your own gardens however you like.

Back to Eden Chicken Run Composting

The basic idea: throw everything out in the chicken run (or inside the coop, if it has a dirt floor like ours does) and let the chickens turn it into compost.

If you have free-range birds without a dirt-floor chicken coop, this method is a non-starter. I have found that letting birds totally free range is more trouble than it’s worth, as I’ve lost many birds to predators, plus finding where they lay the eggs is a total pain.

Ideally you can balance “outside time” with safety, as keeping birds locked up in a coop all the time is sad… but finding eviscerated corpses of birds dragged behind the barn is also sad.

Currently we keep our setting hens locked up in the coop for the safety of their eggs. Mothers with young chicks are also kept inside. The other birds are free to wander during the day, but if they start sleeping in the trees and not coming back to the coop, we lock them up for a few days to reset them.

But… back to chicken run composting.

Throw Compostable Items to the Birds!

Yard “waste”, weeds, kitchen scraps, picnic remains… if it’s organic and will break down in a reasonable amount of time, throw it to your hens. When you prune trees you can take the entire pruned branches and toss them into the chicken run. When all the leaves fall off, pull the branches out again and throw them into a hugelkultur mound, turn them into biochar, or use them for rocket stove fuel.

The leaves will be turned into compost by your birds, and then you can use that compost in your garden.

This mother hen and her chick started tearing into the leaves and garden “waste” as soon as I dropped it in the coop: Chickens want to work for you if you give them a chance.

I used to have a compost sifter made from pressure treated wood with hardware cloth nailed on it. Now I just use a bent piece of hardware cloth. Redneck, but it works. Throw the dirt and compost from the floor of your coop or chicken run onto the hardware cloth and sift it through. This keeps the rocks and big pieces of junk out of your garden, though if you were going to use this chicken run compost for fruit trees you could just shovel it into a wheelbarrow and skip the sifting.

I love handling dirt so I enjoy sifting. You can see various twigs and debris left behind by the birds. Eventually everything woody will break down, so I don’t take the little twigs out of the run – I just leave them to be turned and manured by the chickens until they’re compost.

Wrapping It All Up

The compost I harvested from the chicken coop in today’s video was the remains of a thick layer of leaves and grass we raked up during a yard clean-up day. The inside of the coop was mostly 6″ deep in it and you can see how thin the layer is now.

I harvested a total of two five-gallon buckets of compost from the coop when all was said and done. Five gallons of compost was spread across my garden beds and the remaining five gallons I set aside to make potting soil.

The Back to Eden garden method, in its whole, works best when you have access to lots of cheap or free wood chips. I do not, so, like most of my gardening, I borrow the pieces that work for me and throw out the pieces that don’t.

Heck, I can’t even follow a recipe in the kitchen without changing it, let alone do so in my garden.

If you’re interested in composting with chickens and other great methods for making compost without killing yourself, I highly recommend you pick up a copy of my popular book Compost Everything: The Good Guide to Extreme Composting. I love the Back to Eden chicken run compost method… it’s amazingly easy and creates rich compost in only a couple of months. I like it so much that I’m going out this afternoon to load up the bottom of my chicken run with a bunch of fresh organic matter.

The chickens enjoy it and I don’t have to spend any time measuring C/N ratios or turning a pile. Win, win, win!

Finally – I posted a video of Paul Gautchi using this method a few years back. You can see that post here.

I am reading your “Compost Fverything” book and I have a few questions. I have been reading how “fast fashion” is causing lots of problems in the US and in countries producing it. I was wondering if you can do the melon pit kind of composting with holey old clothes or is there bad stuff that would get into your veggies or tree? I was thinking it might be a good way to hold water even if it doesn’t decompose. I was also thinking of doing the same thing with old Reader’s Digest condensed books…(No one wants those either.)