Bad Roosters Get the Ax 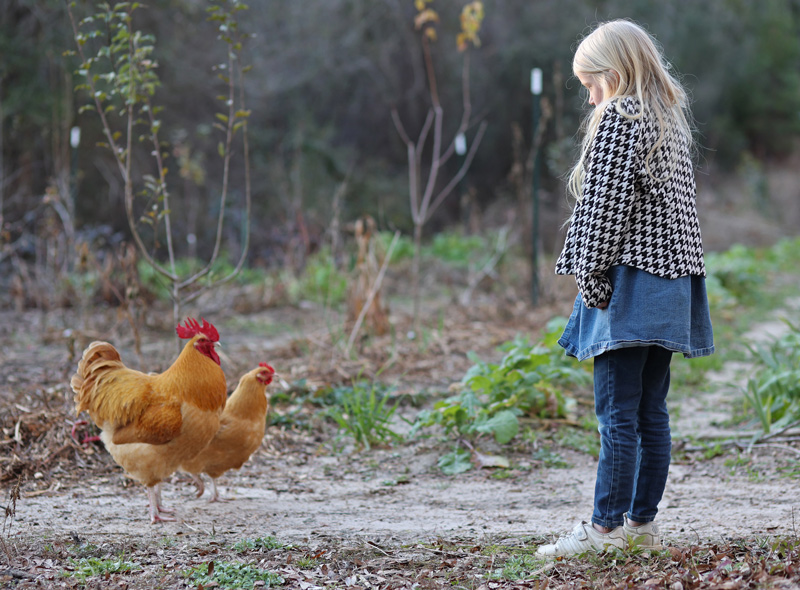 I am working on a chicken butchering demonstration this week. We filmed over the course of two weeks and it’s coming together nicely.

We raised our red broilers and successfully butchered and put them in the freezer, filming the process as we went.

On the second butchering day, we also whacked our mean Buff Orpington rooster.

Off to the killing cone with you, Goldy! 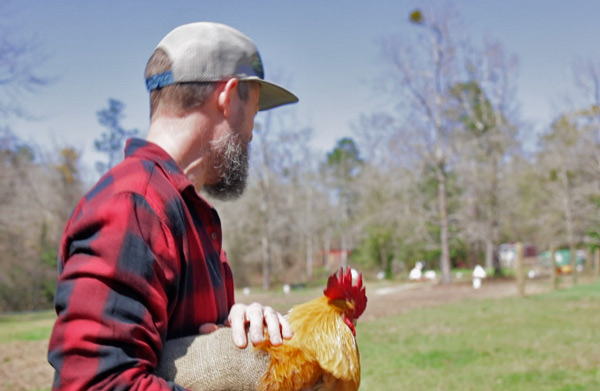 The final provocation was when he spurred my young son just below the knee without any provocation. The kids bring the Orps food and water and get their eggs every morning. Over the last few months, Goldy decided to just attack every little kid that went in his pen. He wouldn’t attack me, but he sure was aggressive to the smaller children.

A couple of months ago I took a picture of my daughter facing him down.

He was not a good rooster. 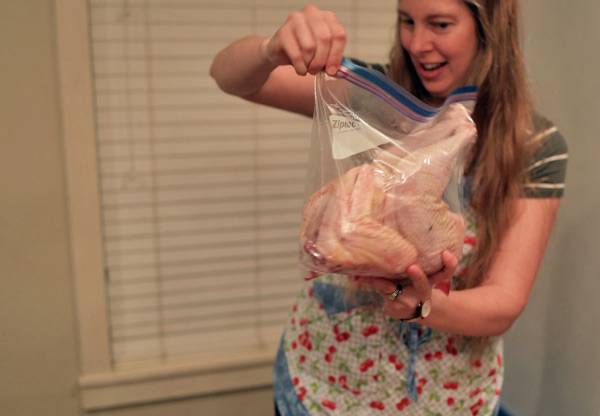 The presentation I’m wrapping up is going to be titled How to Butcher Chickens the Redneck Way: Backyard Poultry Harvesting for Normal Folks, or something like that.

I keep putting all my best stuff up on YouTube for free, so instead of doing that – and YouTube hates butchering videos anyhow – I’m going to offer this demonstration as a for-sale download. We’re going to also add in a stock-making tutorial with my wife, which will add even more value. It’s going to be a nice, feature-length presentation.

Right now I’m waiting for the rain to stop so I can plant yams. It’s that time again!

Have a great weekend.

Chicks In the Bathtub!
Permaculture Chickens
Chickens in the Wild
Are Chickens Worth it? Let's Count the Cost!
Red Jungle Fowl Living Wild
14 comments
PinterestWhatsappEmail

Build Community and Compost Your Enemies

How Joseph Lofthouse is Helping Me Grow Watermelons

I wonder how I could sneak some chickens into my backyard without the HoA finding out.

If you just keep hens they are quieter. However, I would do all you can to get to a place where you can raise your own food with less restriction. Long-term I think that will serve you better.

Have them registered as emotional support animals. Seriously!

Mmm, stock. Yeah, best way to deal with an uppity rooster is to eat him.

We have had good luck with the Buffs. Best was Neo. However, we had one after him that was extremely aggressive towards my wife Virginia. She was having to stand up to him and fending him off with a stick. He got her good one day. Spurs on both sides of the leg. Took 3-4 weeks to fully heal. She looked out the window and I was carrying his lifeless body to the garbage container within 10 minutes. He crossed the line. Could not wait until the next harvest. When you get one like that, it is best to handle it quickly, especially when children are involved.

And the squeamish among us thank you for making an easy way to avoid the chicken killing posts. A win all the way around! <3

I don’t want to surprise people with a gory mess. Not everyone is comfortable. Thank you.

When we have a rooster turn aggressive, he is off to freezer camp right away.

Off with their heads!

But WHERE will this chicken video be offered?

I will put it up for download here, and link it on YT.

Roosters can be such buttheads. I had a couple that kept trying to attack my 4-year-old a couple years ago. They also would get really aggressive with the hens, and seemed to bring out the worst behavior in the rest of the roosters. The ringleader would chase a hen down and jump on her, and then the rest would gather round to wait for their turn. It was hard to watch. Once the key agitators were promoted to freezer camp, the rest of the roosters started behaving better.