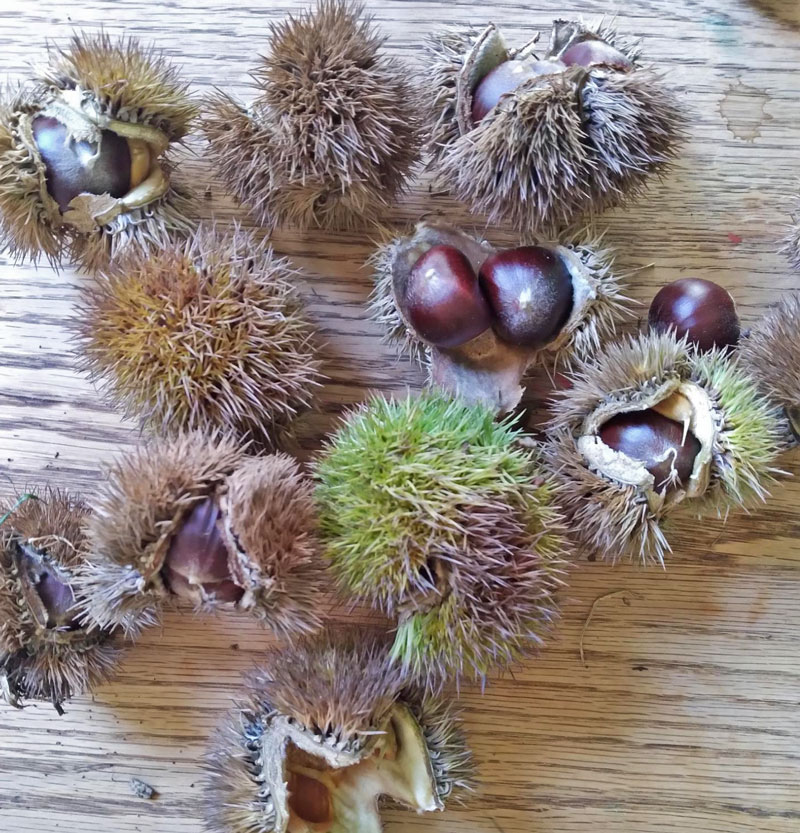 On Friday I took Rachel out for lunch at The Warehouse Market, a very nice country store/bakery which also happens to stock some of my books.

While driving a meandering country road, I spotted something beautiful. So beautiful, in fact, that I had to turn around and take pictures. 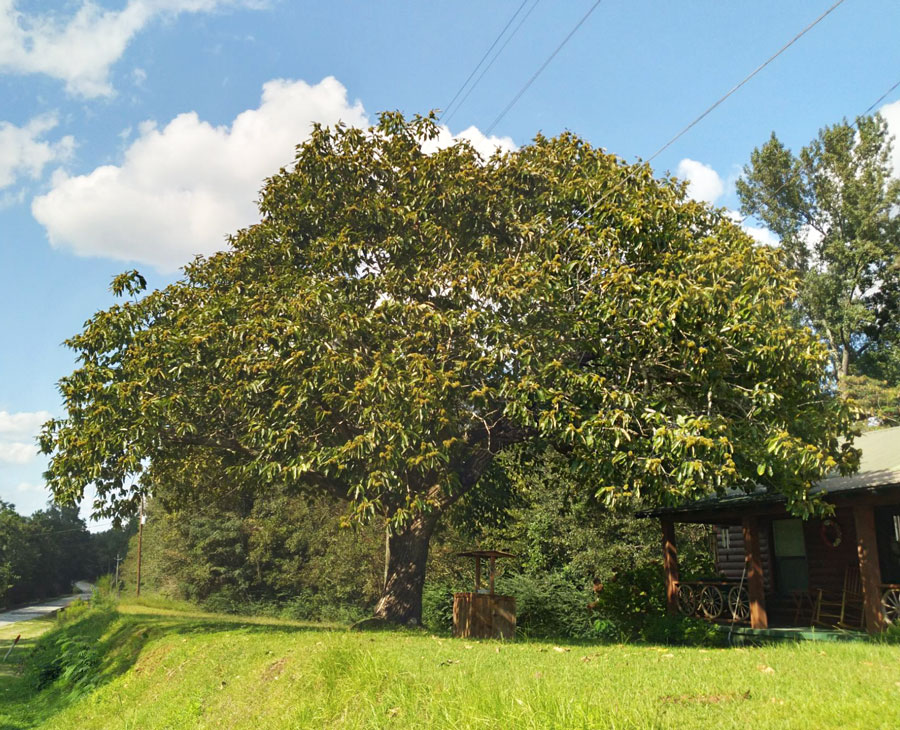 This chestnut is one of the loveliest I have seen, and it was absolutely loaded with nuts. 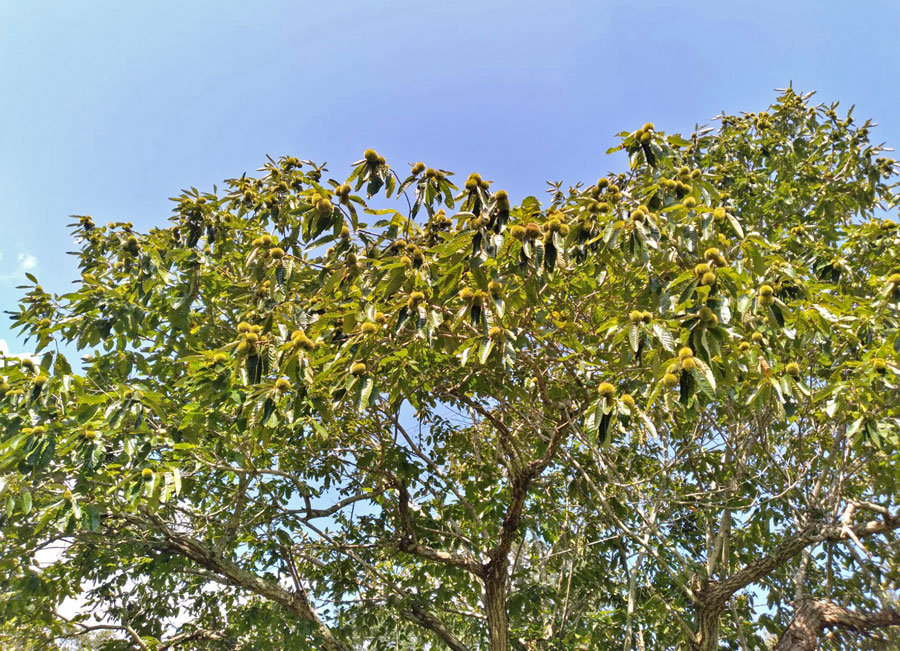 As I was taking this second picture from the road, the property owner came out and said hi. I walked up to the porch and said “hi,” telling him that his tree was the most beautiful I’d seen here in Lower Alabama.

Come to think of it, it may be the only one I’ve seen here, other than the potted ones I started from seeds I purchased. Some folks most plant Chinese chestnuts on their deer plots, since I have seen them for sale at stores and a local told me they did – but I haven’t actually seen them growing.

This one is a showstopper. Jack, the owner, told me it’s at least 200 years old.

Even the trunk has great character: 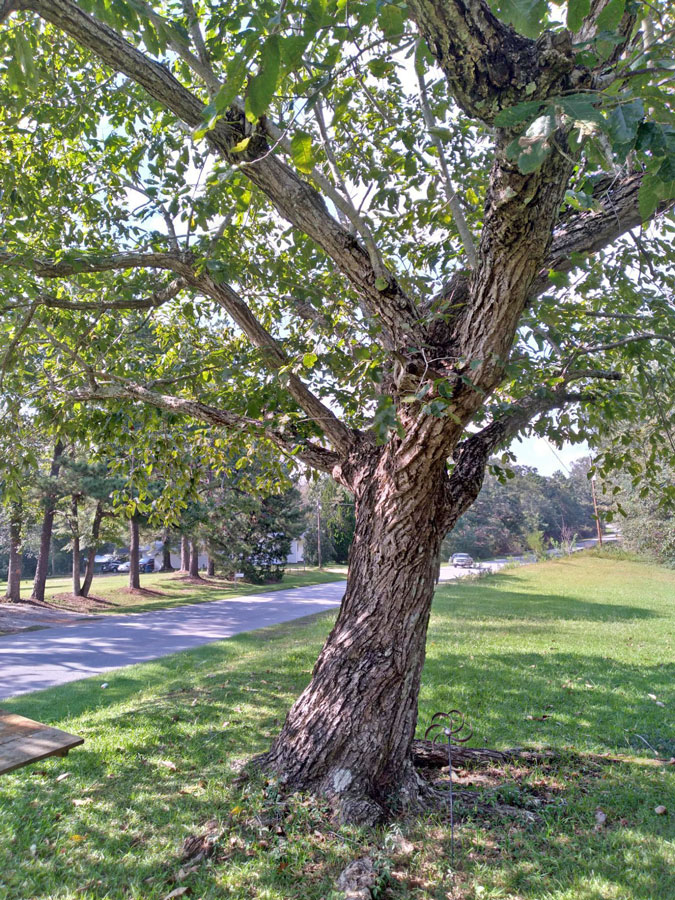 “About twenty years ago, the power company came and was going to cut it down. The man had the chainsaw at the base when I caught him,” Jack said. “I told him he could move the power line, but there was no way I was gonna let him cut down that tree.”

I noticed the power lines going through the middle of the tree, and thought how they must have run the lines over the tree to begin with, if the tree is centuries old.

“People don’t get that God made these trees to feed us. They’ll cut one down for convenience or to cut corners.”

“I’m glad you were here to save it,” I said. “This is a truly beautiful tree. Obviously it’s really well suited to our area.”

“It’s always been there,” Jack continued. “I’ve lived here my entire life. It always makes lots of nuts, except every ninth year it doesn’t bear anything. Do you know why it would do that?”

“Perhaps it needs to recharge,” I mused.

“Some Chinese used to come and pick them,” Jack said. “I told them they were welcome to take them. I roast a few every year but this tree makes so many. They don’t come anymore, though. That was some years ago.”

“Well, you can come and pick up as many as you like,” he told me.

“Thank you,” I replied. “I’d like to plant them and save these genetics, since they’re so well adapted.”

“You’re welcome to them,” he said.

Right now the nuts are just starting to fall. 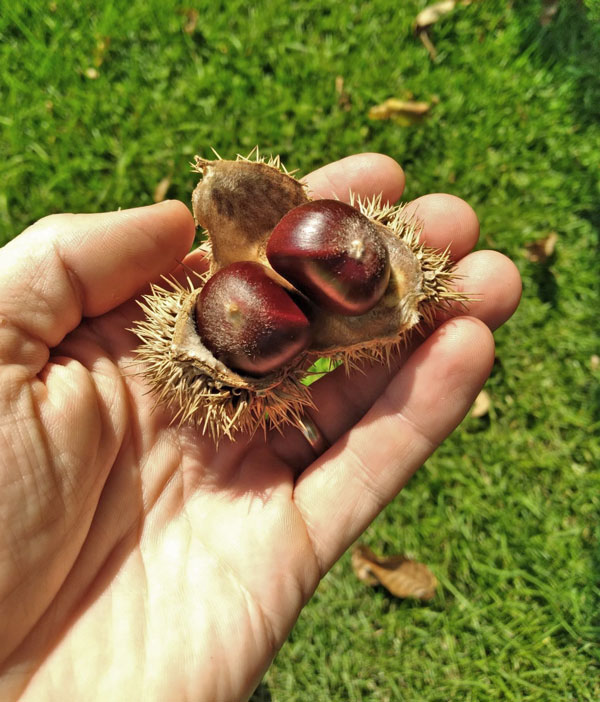 What a nice find! Here are a few more photos: 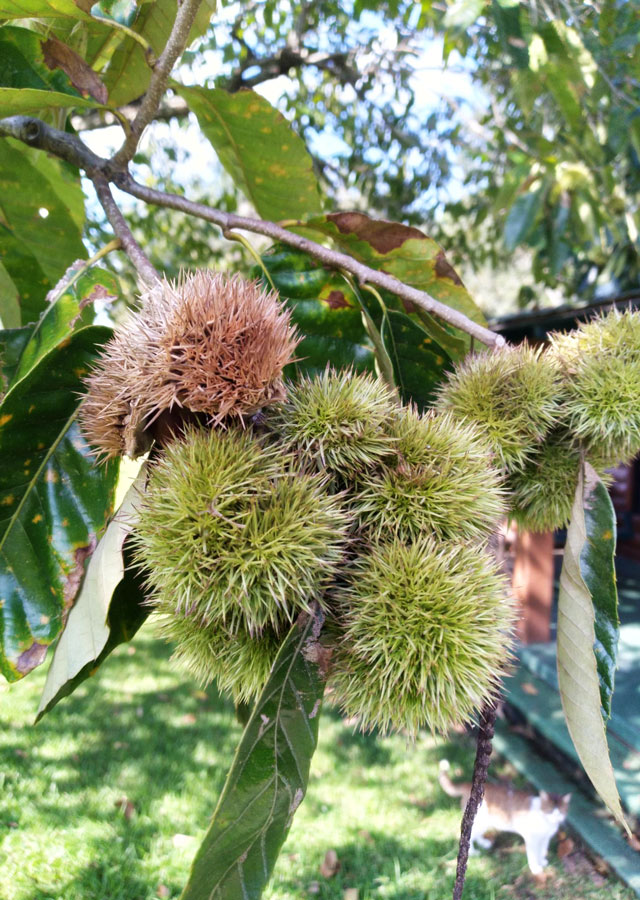 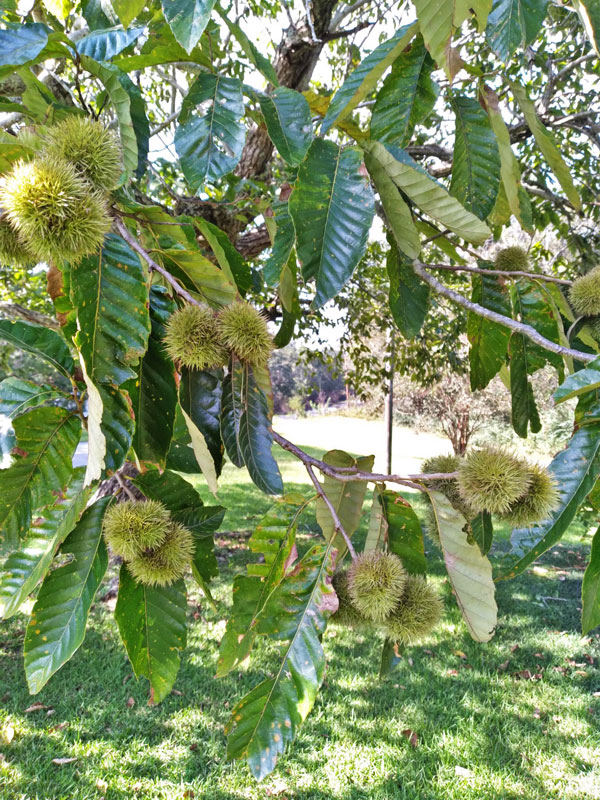 I’ll be checking back on that tree and gathering more nuts to plant.

We’ll see if we can store these chestnuts through winter to grow in the spring. I’ll probably follow the method in that link, as well as plant some directly out in a seed bed this fall.

Pears Grafted Onto Hawthorn: An Update
Grafting Nectarines and Peaches on a Chickasaw Plum
Crash Gardening S2, Episode 2A: A Tour of My Food Forest
Balcony Gardening
Update on Growing Cherries and Almonds in Florida
17 comments
PinterestWhatsappEmail

Starting Lots of Transplants on the Cheap

A treasure from the Lord.

I found a couple of extremely large, old crab apple trees near a local grocery store, red and yellow. Last year I gathered a few dozens of each. Went back this year to see how the apples are doing, to get more. Both trees were… gone.

I’m so very glad I saved them last year. I just planted the apples in an air prune bed last fall, all mixed together. They’re all over a foot tall today.

Some will go into our new grocery row garden, some in our orchard.

I am SO glad I harvested some last year

That is so sad, but good you saved them.

What a wonderful find! I can’t wait to see you growing these trees and preserving those genetics.

Thank you. I was quite joyful over spotting it, and meeting the owner.

Please sell them! I want a native chesnut so badly.

Absolutely breathtaking! The photos reminded me of a scene in the book, ¨The Overstory,¨ by Richard Powers

´Now is the time of chestnuts.

People are hurling stones at the giant trunks. The nuts fall all around them in a divine hail. It happens in countless places this Sunday, from Georgia to Maine. Up in Concord, Thoreau takes part. He feels he is casting rocks at a sentient being, with a duller sense than his own, yet still a blood relation. Old trees are our parents, and our parents’ parents, perchance. If you would learn the secrets of Nature, you must practice more humanity. . . .

In Brooklyn, on Prospect Hill, the new arrival, Jørgen Hoel, laughs at the hard rain his throws bring down. Each time his stone hits, food shakes down by the shovelful. Men dash about like thieves, stuffing caps, sacks, and trouser cuffs with nuts freed from their enclosing burrs. Here it is, the fabled free banquet of America—yet one more windfall in a country that takes even its scraps right from God’s table.´

How fortuitous that you found that tree, David. You´re the modern day Johnny Appleseed.

David you should read “American Chestnut The Life, Death, and Rebirth of a Perfect Tree” by Susan Freinkel. I’m sure you will find it as fascinating as I did.

I just bought it. Thank you.

David, every year chestnut hill outdoor ships trees meant for hunting food plots to select walmart stores and they will email you when the trees ship and to which stores they are going to. I’ve picked up several dunstan chestnuts this way as well as a mullberry, They also commonly offer persimons and crab apples. Nathna

That is cool! Thank you.

That is a gorgeous tree. It’s really sad to think of those guys from the power company coming right up to a tree like this, and being so oblivious to its majesty that they wouldn’t even hesitate to cut it down. I guess after cutting as many trees as they do they probably can’t see trees the way a gardener does…sometime a job will chip away at your soul like that.

Also what a great way to meet someone. I see interesting plants in people’s yards all the time, and wish I could ask the owner about them. I guess you can’t be afraid to stop and take a look, right?

With American Chestnuts being critically endangered, I hope the power company has some safeguards in place to prevent the accidental cutting of the tree in the future.

What a beautiful and rare find. I wonder if The American Chestnut Foundation is aware of this specimen and has been able to add its genetics to their studies to revive the plant.

It’s a good question. I’m not sure it’s an American.

I accidentally stumbled upon the plight of the American Chestnut just in thelast few weeks as we had just ordered a Colassol from Isons and figured out we needed a pollinator and couldn’t find it. Nor get one shipped to FL. So changed to Just Fruit and Exotics for a pair as I mentioned on another commemt.The pollination is complicated between the European, Japanese, Chinese and American. They are introducing a genetically engineered American and looking to introduce it into forests amid some controversy. You can get that tree ID and located if you wish. Very rich ancient history and infoo regarding the Chestnut. I’m mostly hoping the 2 we plant thrive but will probably guerilla garden nuts later. Be Part of the Chestnut Renaissance https://acf.org/resources/identification/

Genetic engineering… great. That is typical hubris from the scientific establishment.

It’s called Darling 58. They spliced in a gene for blight resistance. Before at another property someone gave us a few trees, we planted, they grew. I had no idea all the things going on with chestnuts really. I did find the rabbithole of info intriguing. I’m not advocating one way or the other for the new American chestnut. But the loss of the American chestnut at the turn of the century was a major biological disaster.

Yes, definitely a disaster. And very sad. So much timber and food lost, as well as a big piece of the ecosystem.