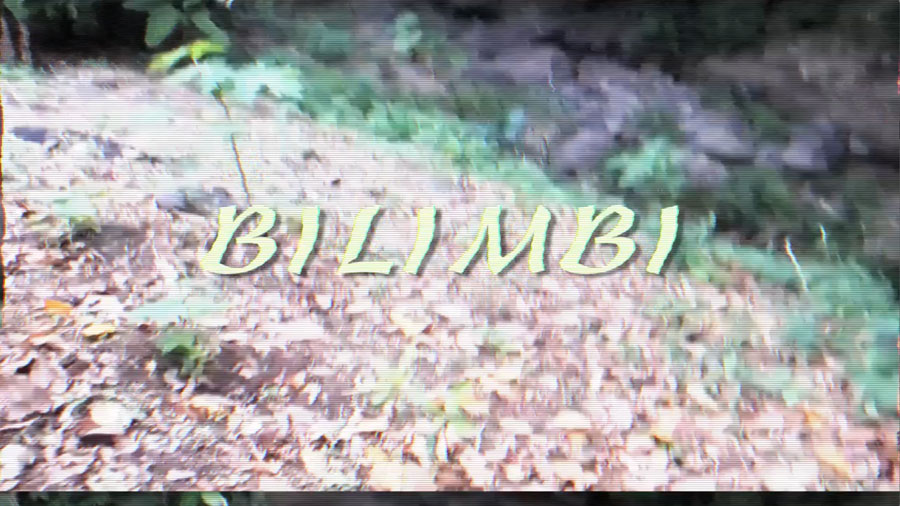 Last week I released what may be the most controversial film I’ve ever uploaded to YouTube, if not the weirdest.*

In Search of… Bilimbi!

I had people write me to make sure I was okay after that one.

If you can’t stand the tracking, stay out of the bilimbi!

I’ve always had a thing for old science and nature documentaries. I used to watch them on a wavy old TV set or off distorted VHS tapes. In the bilimbi film I recreated that in stunning technicolor. Anyhow, for those of you that didn’t get it… I feel very badly for you.

It is a powerful and beautiful film of which YouTube is not worthy.

Every distortion and tracking error was lovingly hand-built.

Every warbly piece of the vintage soundtrack was tweaked and EQed for maxiumum impact.

Even now a tear comes to my eye as I ponder the masterpiece I created.

I wandered across the creek behind our place and up the mountainside with some of the children one afternoon on a rambling exploration and that’s when we first saw the bilimbi tree. I recognized it from the picture in my well-loved copy of Fruits of Warm Climates and couldn’t believe I finally got to see one in person.

Unfortunately, I didn’t have my camera so I could capture images for all of you – so I decided to go back the next day in search of the bilimbi, this time armed with my inexpensive Nikon L830 in case I fell down the rocks or something.

I searched and search and searched, doing my best to retrace my steps… and had no luck! The next afternoon I tried again… and still no luck!

That’s where the film came from. A fruitless (heheh) search. Finally, I asked again for directions from a local friend and he told me where to look. That third time… well… I’ll just let you watch the video:

I really was quite happy to find that tree at long last. Look at all that fruit!

It’s a small tree, similar in growth and appearance to its cousin the starfruit but bearing fruit directly from its trunk instead of just on the branches.

The fruit is incredibly acidic. As I say in the video, they taste like War Heads candy.

But What Is a Bilimbi?

Bilimbi has some interesting food uses according to Purdue University:

“The bilimbi is generally regarded as too acid for eating raw, but in Costa Rica, the green, uncooked fruits are prepared as a relish which is served with rice and beans. Sometimes it is an accompaniment for fish and meat. Ripe fruits are frequently added to curries in the Far East. They yield 44.2% juice having a pH of 4.47, and the juice is popular for making cooling beverages on the order of lemonade.

Mainly, the bilimbi is used in place of mango to make chutney, and it is much preserved. To reduce acidity, it may be first pricked and soaked in water overnight, or soaked in salted water for a shorter time; then it is boiled with much sugar to make a jam or an acid jelly. The latter, in Malaya, is added to stewed fruits that are oversweet. Half-ripe fruits are salted, set out in the sun, and pickled in brine and can be thus kept for 3 months. A quicker pickle is made by putting the fruits and salt into boiling water. This product can be kept only 4 to 5 days.

The flowers are sometimes preserved with sugar.”

Good enough for me. You’re getting added to the homestead, bilimbi!

I brought home some rotten ripe fruit from around the bilimbi tree on my final quest and will be attempting to grow the seeds contained therein. The flavor, though powerfully sour, strikes me as having great culinary value. It would be nice to have a tree right where I can find it.

Especially considering the problem I have finding bilimbis.

*This film would probably take the “weirdest” award:

All the Food Groups

You’re right, Backholme wins weirdest on youtube. In Search of… Bilimbi is a close second, though. 🙂

what is the closing music? It is nice.

On Bilimbi II? That’s a piece I was hired to compose for a videogame soundtrack. I was quite happy with it.