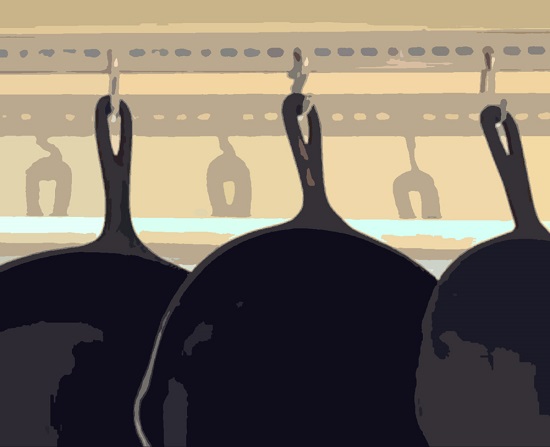 When I was in my 20s, I thought Teflon was the coolest thing. You could fry an egg on a Teflon pan and it was like it wasn’t even touching the surface. It was SCIENCE!

Then someone told me I was supposed to throw out a Teflon pan when it got scratched or else terrible things would happen to me. With the way I cook, all my pans had scratches. This was an impossible quest — and limp-wristed cooking with a little nylon spatula is about as appealing to me as watching Univision cover the Guatemalan amateur curling championships. I also discovered that aluminum was linked to Alzheimer’s, so even if the Teflon didn’t kill me, I figured the aluminum beneath it was bad for some… reason… I… can’t… remember.

With a heavy heart, I ditched my Teflon and got some good stainless pans. They scorched food at first, but I got pretty good at pre-oiling the pan and being careful to watch the heat.

Then at some point 10-15 years ago, a friend re-introduced me to cast iron cookware. I say “re-introduced” because when I was a kid we had a couple of my great-grandmother’s (I believe) old cast iron pans that ended up relegated to the carport, rusting away. My mom had never learned how to cook on them or care for them. They were heavy and all the food stuck to them, so they got kicked out of the kitchen. Sadly, they were long-gone by the time I learned from my friend how to really use cast iron.

The key to being happy with cast iron is keeping it well-seasoned. Seasoning is a process of heat-bonding oil into the pan so it maintains a glossy black surface. The pans I use now are so slick they’re almost Teflon-esque — however, unlike Teflon, they’re not going to off-gas toxic fumes if they go over 500 degrees or give me horrible diseases if they get scratched (…)

CLICK HERE to read the rest at Mother Earth News!

Cob Rocket Stove Upgrade
An Unconventional Use for Snails
How to Eat Noni Fruit
Make Your Own Live Fermented Pickles (A Very Easy Pickle Recipe)
How to Make Star Fruit Jam (Recipe!)

Announcing “Grow or Die: The Good Guide to Survival Gardening”!

How to Eat Noni Fruit