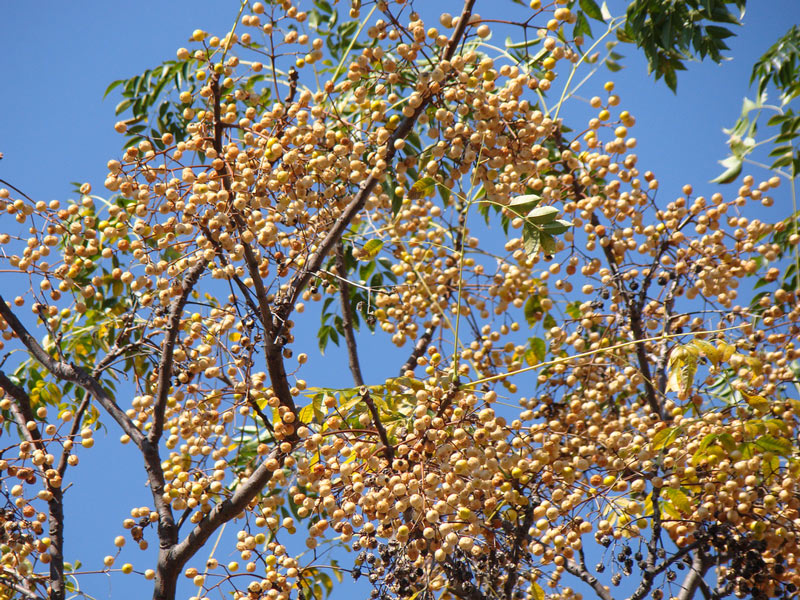 Hate them! The grow everywhere, the tree is weak so branches snap off in a stiff wind.It (the one next door) drops everything in my pool . Spring IT drops flowers , so many flowers they clog the pool filter daily! Summer it drops the bracts or colored leaves, fall it drops branches and berries. I’m in central Fl so no winter but it snow’s chinaberry!

Do their leaves are able to repel insects? Or can it be use as a key ingredient in making an organic mosquito coil for better results?

What insects does it kill and hilow do you an insecticide from it?

Namaskar, A Yogi or a Life Experience Scientist makes decisions by Experimenting. Does this Plant have any beneficial uses ? How is this Plant similar to the Neem tree, which is a Medicinal Plant ? BNK

Several chapters of Texas Master Naturalists spend hours each week killing Chinaberry trees, mostly along creeks and streams in and around San Antonio. As invasive non-natives that change the soil chemistry and displace natives they are an unwelcome nuisance that disrupt habitat restoration. Nice neighbors upstream from my patch of green belt allow hundreds of seeds to float downstream each year. I manage the problem in my small zone of stewardship, but see new thickets everywhere during walks .

B.E.
Can seasoned China berry wood be used safely for food utensils such as Bowles and pepper and salt mills?