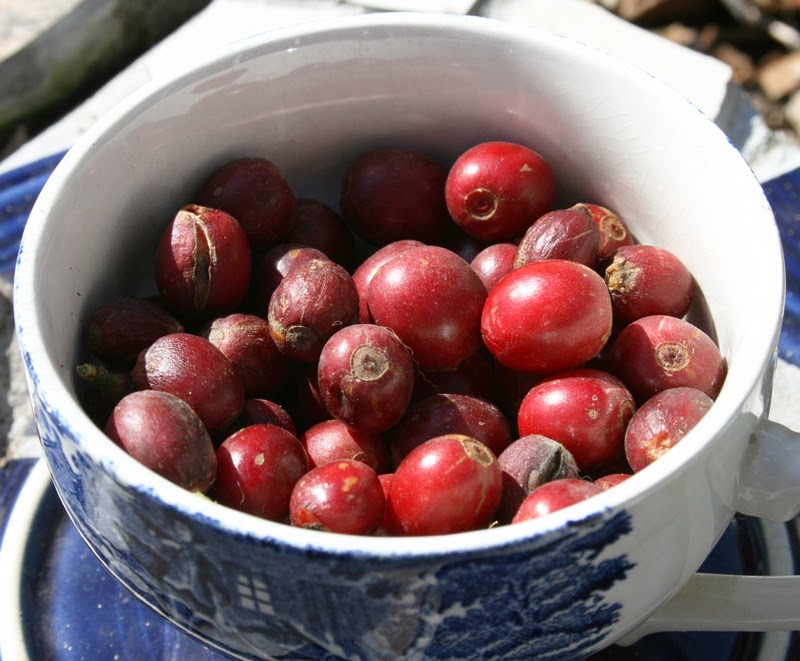 I have wanted to grow big piles of delicious coffee for a long time. Back in Florida I grew multiple coffee plants and even sold then in my nursery, but the climate wasn’t the best so I was stuck keeping my big coffee tree in a pot in the greenhouse or bringing it inside during frosts.

The one I planted by the south-facing wall of the house did well, though, and is still alive today so far as I know. I did well enough with coffee, tea and yaupon holly that I wrote a little booklet on growing it, thanks to the additional help of Kona coffee farmer Gary Strawn (owner of Kona Earth coffee, which tastes amazing) who corrected some of my more exuberant ideas.

The plants I grew in Florida were Coffea arabica, which is the most gourmet of coffees; however, we have coffee growing here on the property we rent which is almost certainly Coffea liberica.

Coffea liberica is a courser-looking, lighter green coffee plant that is tall and has beans almost twice the size of the arabica beans I grew in the states.

While checking on them last week in search of ripe fruits, I discovered something wonderful:

I was hoping to harvest fruit and plant the beans, then I found that nature had already done it for me. There must be 50 or more sprouts out there around the trees. Yee-haw! This means I get to start my plantation!

Of course, just potting up some plants isn’t good enough to get my plantation started.

I also need to buy some land. And that leads me to a dilemma.

It took a lot of money to move overseas.

I have enough cash to buy a small piece of property but it won’t leave me much of an emergency cushion and it ties me to one place.

At the same time, I want to own land so I can build a new food forest.

I could buy about an acre here for $50k. That’s rather brutal considering the cost of rural land back in N/C Florida, but that’s the economics of it. Then I’d need to build a house. Building a house here is MUCH cheaper because you don’t have a bunch of codes and inspectors and government losers to pay off before you can build. Heck, you don’t even need indoor plumbing to get approved here in the mountains.

I could likely build a decent Cracker house for maybe $15-25k.

This would be awesome, but then again… if I just rented I could live pretty cheaply and keep the savings I have in the bank.

It would also put me in the position in which many of my readers find themselves: a small yard at a rental and maybe some balcony space.

I know it sounds crazy, but food forest gardening is way too easy here. Fruit trees plant themselves all over the woods. Mangoes are a naturalized species for goodness sake! So are papayas. And yams? Everywhere. Just go wander through the woods and you can dig them all over the place.

So… having a small space gives me limitations that might help future writing. It also means I can move easily if I get tired of where I am.

Just thinking out loud… in front of the entire world.

I do want to plant that coffee plantation. If I rent, I’ll have to grow them in big pots (which works, incidentally), but if I can get them in the ground I’ll get a lot more production.

A New Post at The Prepper Project: Grafting Fruit Trees I once did a horticultural analysis of a property way out in the scrublands. The owner had good clean water, no real neighbors, a great location… and hot, fast-drying, mineral-poor sand that was really, really bad for gardening.

There was no couching it. I had to tell him: this area just won’t cut it for most of your planned annual gardening projects. It will barely support much in the way of fruit or nut trees.

What it did have was a decent amount of native American persimmon trees. They were dwarfed by drought and stress, but they were strong and alive. That said, I saw very few with fruit.

With antive persimmons you deal with a variety of drawbacks. Unlike their cultivated Japanese persimmon relations, they’re dioecious. That means you have male and female trees – and you need both to get fruit. The male won’t make fruit but it does provide the pollen that allows the females to fruit.

Seeing the wild trees gave me an idea: why not use the existing trees as rootstock for Japanese persimmons? They’re already established and growing in poor soil, making them a perfect support for a higher-producing and delicious variety of improved persimmon!

Sometimes our first observations aren’t the best. You might see a crabapple with lousy fruit in your yard and think “I hate that thing! I’ll tear it out and plant a good apple in its place!”

Step back and think about it: maybe that tough tree is a resource you can use. With grafting you can go nip some twigs off good apple trees and just graft them onto the tree you don’t like. If it’s a happy and healthy mature tree, use it! If you can graft fruit trees, you can grow more food for less money… As I wrote last year:

God bless you all and thanks for reading. Have an extra slice of pie and coffee for me.

The Simple Secret to Growing More Food with Less Work

Growing Fruit Trees from Seed – What about...

It seems to me you already have the answer to your housing dilemma. Just keep doing what you are doing and have faith that things will work themselves out. Don’t over think it man…with time the right path will present it self. All things in their own time. His voice has guided you and you’ve followed to where you are today. Doubting now wouldn’t make any sense. Just keep us posted so we can share in the adventure. Happy holidays to you and yours and God bless.

Thank you, Frank. I will keep moving along and see what happens.

I know it’s late but Merry Christmas to you too!

Hope you had a good holidays!