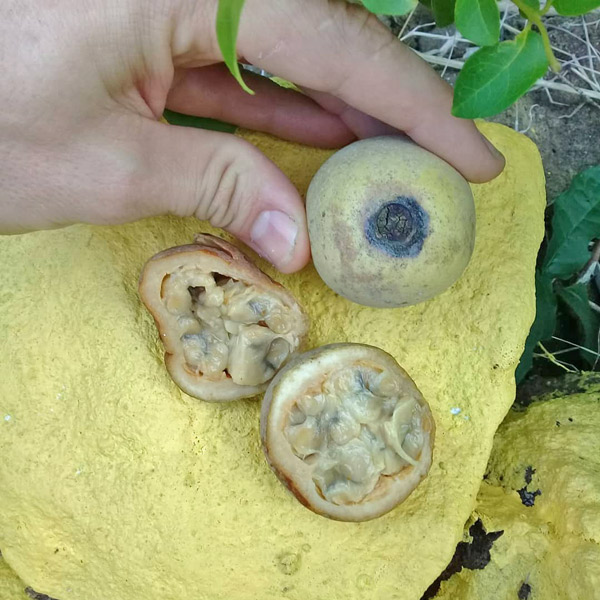 Last weekend Rachel and I took a hike down to the beach. I had an ulterior motive for the hike, as I’d spotted a strange tree fruiting along the road and wanted to revisit it and take photos.

Here are the pictures: The fruit looks rather like a loquat or some sort of strange fig, sticking upright off the side of the tree. I found one that was soft and decided to open it and take pictures of the interior. The aroma of the fruit was pleasant and it looked like it might be edible; however, if you’ve done any wild plant foraging, you know it’s a very bad idea to take a bite out of a wild plant without knowing for sure if it’s edible.

That’s how you end up with your throat closing up, or worse, death.

I picked a second fruit and took a picture of it next to the one I’d opened: The yellow rocks mark the beginning of a trail down through the woods and to the beach, so I left the fruit there and took a walk with Rachel and the baby. He’s a hunk of baby for sure, so it’s good exercise to haul him places. Though he can walk, he doesn’t walk near well enough to go down the winding, hilly path to the beach near our house.

Down at the beach I caught some hermit crabs for the baby to see, plus we picked some kaffir lime leaves from a tree at an abandoned homestead. The entire time I was hiking, though, I kept wondering about the weird fruit I’d found.

And, most importantly, CAN WE EAT IT?

When I got home I started hunting. After some abortive searches for phrases like “fruit looks like loquat” and “what the heck is this weird, hard, oval thing I found,” I decided to try the plant family route.

I thought it might be a Moraceae at first glance, but the aroma had a slight hint of noni and the leaf arrangement looked like it might be a Rubiaceae.

I was going through the various genera, piece by piece, looking for photos. There are 611 genera in Rubiaceae, however, so after a while, I just called a local friend who literally wrote the book on wild plants in my area.

On my description, he nailed down the species in about five seconds.

I thanked him, and after talking about various plants for another 20 minutes, I hung up and started hunting down information on the species. My go-to stop for plant knowledge is Useful Tropical Plants, which is Ken Fern’s online horticultural knowledge library.

“Genipa is an evergreen tree with a dense, spreading crown, handsome foliage and large showy flowers; it usually grows up to 20 metres tall, with occasional specimens to 30 metres. The bole is usually straight, 30 – 80cm in diameter. The edible fruit is harvested from the wild for local use, whilst the tree is also utilized for its good quality wood, medicinal purposes and various other uses. It is often cultivated for its fruit, and is commonly cultivated for its ornamental value and for the shade it can provide.” (link)

For some strange reason, this part stood out to me:

So I took the soft fruit I’d opened for the photo and tasted it. To my delight, it was quite good – though also quite seedy.

“The Genipa clusiifolia (JEN-ni-puh kloo-si-FOH-lee-uh ) fruit is edible only when black ripe, and then only the pulp, not the seeds. It’s actually a berry the size of a lime. You “eat” it by poking a hold in the tough rhine and sucking out the pulp. (Again, don’t eat the seeds, they will make you throw up.)  The flavor reminds some of prunes, others of liquorish. Many find it  just plain awful.

While the great majority of the plants on this site are available throughout much of America, this is a South Florida, Caribbean native. Its Caribbean cousin, the Genipa americana, is used to make a common drink among the islands.”

I’ve never seen anyone using this fruit here, so that use must be an island thing unknown to locals. In fact, I asked a few locals about the fruit when I first spotted it – before my return trip with Rachel, a baby and a camera – and they told me it was a “dog sapodilla,” and knew nothing about it being edible by people.

Unlike the G. clusiifolia Green Deane writes about, the G. americana fruit I tried was delicious when simply soft – not black ripe/borderline rotten.

It doesn’t look to me a super productive tree, but I still think I’ll add one to my land. Growing them from seed will be fun. I’ll bet the tree can be kept short with judicious pruning.

If you’re a bit bored one afternoon and in search of something productive to do, I highly recommend going for a hike and bringing along a camera, then seeing if you can ID some of the plants you find. Who knows – you might find a new edible!

Awesome loquat tree
Processing coffee from the tree to the cup
Gardening in Okinawa Without Land
Increase Fruit and Vegetable Yields with this One Weird Trick
Composting Storm Debris: 4 Easy Methods

How to Identify Citrus Greening: A Quick Visual...

Hello
We use to eat this as kids in south america. I live in Florida 🙂 where did you find this tree? Would love to get some seeds or cuttings or if anyone sells them in buckets.
Thank u
Best

Exactly, you forgot to mention where in Florida…

I love it so much. It’s great in a beverage guarapo de jagua. And ironically it’s not until it gets all rotted and dry that it’s good for the juice. The first time I tried it, I found it to be bitter but it was so addictive I went back for more. Found it for sale as an icee too. Upper Manhattan