Home Announcements Do Mulberries Grow in Florida, Me on Social Media, and More!
AnnouncementsBooksFlorida gardeningFruit treesMulberry 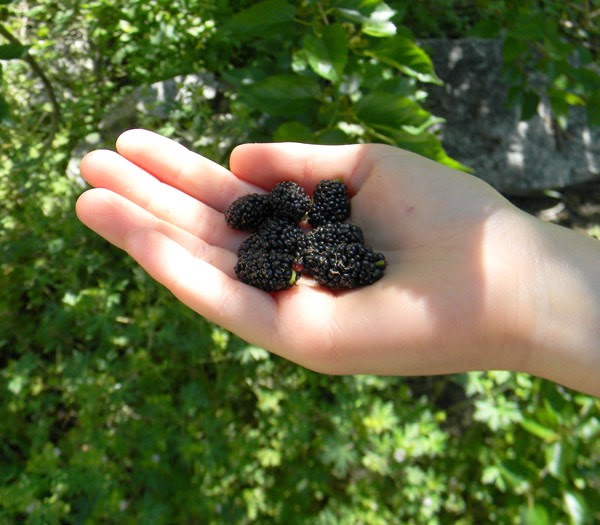 I received this message asking if mulberries grow in Florida (and a few other things) a few days ago from my friend and faithful editor/proofreader, Jeanne:

Hello, David!
Have been having a discussion with another friend up near Jacksonville regarding mulberries. He thinks they can’t grow in Florida. I bought one a few years back, and it’s not doing well. Is he correct? Have you had any success? If so, what do I need to do differently?
Also, I tried to order a Buddha’s Hand tree from California, but they won’t ship to Florida. If I buy the fruit the next time I see it at Fresh Market, can I plant the fruit to grow a tree? Please advise.
Do you have a Facebook page? I could share it with folks who think Florida is easy-peasy to grow things in or with folks who think it’s just too hot, humid, and sandy to grow anything. How are your bees doing?

Any new books in the works?
Hope you and your family are well.

I’ll take this piece by piece, starting with one of my favorite topics: mulberries!

Do Mulberries Grow in Florida?

Not only do mulberries grow in Florida, they grow like weeds in Florida! They grow throughout the entire state as well, from Tallahassee to Key West.

I filmed this down in Ft. Lauderdale:

That’s not to say every individual mulberry tree will do well, of course.

I once planted a long-fruited mulberry I bought at the Master Gardening Spring Festival in Marion County. It kept having problems with wilting, but it seems to get over it. Then the next year it made little fruit in the spring, but as they started to grow, the branches and the fruit all started to die back and turn black. It did the same thing the next year. The year after it died all the way to the ground and came back from the root stock as a small-fruited mulberry of some sort.

Who know what happened. There’s no telling.

The native red mulberry may not be the best choice the further south you go, but the white and black types should be good through the state. NOTE: “white” and “black” and “red” doesn’t necessarily have anything to do with the color of the fruit.

…well, let’s just say I really like mulberries and mulberries DO grow in Florida. Plant more and feed and mulch them well to get them started. They grow like crazy and will produce like crazy when they’re happy.

Even the Buddha Can’t Get Through

…the shipping regulations on citrus!

Okay, how would one go about getting a Buddha’s hand citrus in Florida? Is there any path to rare tree enlightenment?

It’s a hard task, but remember: desire leads to pain and therefore should be suppressed.

Seriously, though – because of citrus greening and other diseases, it’s very hard for Florida collectors to get rare varieties of citrus.

Any serious plant geek looking at this thing would want it: In order to get a Buddha’s hand citrus in Florida, you’ll need to find a rare citrus nursery that sells them or you’ll have to find a person with a tree you can beg some scion wood from, then graft that scion onto another citrus growing in your yard or a random root stock.

It seems there may be multiple cultivars, as claimed in chapter 4 of Robert Willard Hodgson’s The Citrus Industry:

“A most unusual and interesting citron is the fingered or Buddha’s Hand citron (fig. 4-71) of the Orient (bushukan of Japan), where it has been prized for centuries, especially in Indo-China, China and Japan.  As the name indicates, the fruit is apically split into a number of fingerlike sections, somewhat resembling a human hand. There appear to be two clones—one in which all the fruits are deeply fingered and lacking in flesh development and seeds, the other in which only part of the fruits are fingered and the rest are corrugated, lacking in flesh, and contain seeds hanging free in the locules.  Both are typical acid citrons in all other respects and would seem to constitute clonal varieties rather than the botanical variety sarcodactylis as they are classified by Swingle (see chap. 3, this work).”

No telling if they’ll produce true to type if you find seeds. My bet is that tracking down scions inside the state is the best option. Good luck.

David The Good on Social Media And finally, on the incomprehensible Google+, I’m https://plus.google.com/+davidthegood/posts/p/pub

The best place to interact and ask questions is here or on The Survival Gardener Forums, however. I try to limit my time on social media as I have a lot to do and write.

I was most of the way through writing a new book on Florida zone-pushing when I got talking with my publisher and he convinced me to expand the topic to include zone-pushing across multiple climates, rather than just having it be another regional title.

This seems like sound advice to me and I already have Dr. David A. Francko on board to write the introduction, which pleases me to no end. He’s the author of the brilliant zone-pushing book Palms Won’t Grow Here and Other Myths.

It’s going to take some time to re-write and research, but I do think we’ll have it out by some time in August or September.

I’ve also almost finished working on a short book on beekeeping in the south that needs some final fact-checking and proofing before it’s ready. That’s on the back shelf at the moment but will be released before too long. My co-author Allen Dovico made this one happen, since I’m nowhere near the bee expert he is.

Finally, I have two more books planned: one is a great big book of crazy gardening ideas with lots of drawings, the other is a book on forest gardening across multiple climates.

Totally Crazy Easy Florida Gardening is almost moving a good amount of copies and Florida gardeners have greatly appreciated that one so far – I keep getting great feedback on it.

And How Are My Bees Doing?

They were doing great… when I sold my homestead and ran away to the tropics. Just about to swarm, in fact, and Allen and I were going to split the hive. You know, it’s really hard to bring a hive on an airplane. I tried claiming the bees were “service animals” but they wouldn’t believe me. Then I cried “sexism” because the workers are all females and they were obviously being discriminated against. In the end I had to leave the hive with the TSA. I gave it a good kick before walking out, though.

Enjoy the rest of the day, folks – see you tomorrow.

My new favorite music video – plus a...

I will be forever thankful to you for encouraging me to plant mulberries. My family was starting to have serious doubts about the whole “food forest” idea after all of our problems with the peaches and plums, random tree deaths, non-producing pomegranates (the fruit, of course, I planted the most of) and every citrus disease you can find in a book. That one everbearing dwarf mulberry gave us more effortless fruit this year than any other tree in my yard. I’m now encouraging other Florida gardeners to *start* with mulberries as their first fruit tree.

Thank you, Andi – I appreciate it. I’m going to quote you. 🙂

I know there are other sources further south.

Hey David, you have any idea if pigeon peas would grow in 9b? I’m in Tampa Bay nearly right on the coast. They sound great.

I live in North Ft Myers, Florida. I had 3 mulberry trees that produced the sweetest mulberries. Even my dogs would eat the ones on the ground. Made great jam too. To answer your question, yes mulberries do grow in Florida.

Yes indeed – they really are one of the best trees you can grow. Easiest berries for Florida, too. You have smart dogs!