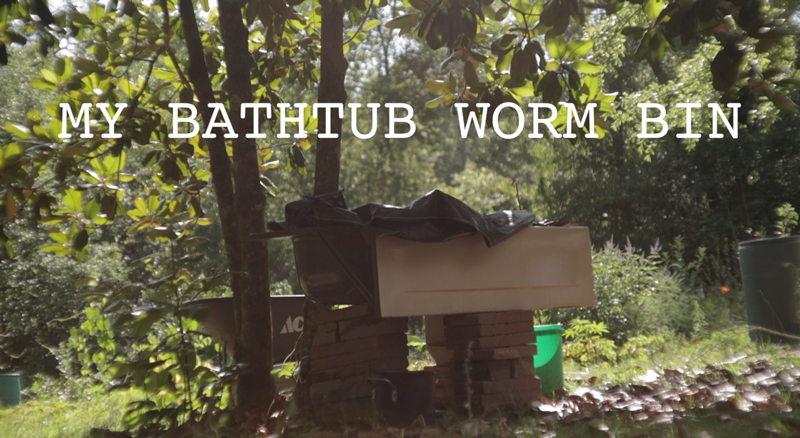 I’m back in the garden again, after a couple of week’s hiatus from YouTube:

This bathtub worm bin has really been super easy to manage – I love it.

Breeding Bacteria on Purpose
Clear Plastic vs. Black Plastic for ROASTING Grass/Weeds
Weed & Feed
How to Make Your 2017 Garden More Productive
Humus Is What We Need
1 comment
PinterestWhatsappEmail

The Piggy Playground and Piglets on the Homestead

I built mine after watching your video, I made an error and left the wrong end too low so there was always some liquid pooled and it wouldn’t drain completely. Just an inch low, but it was always there.

All in all, it has not been a problem other than the leachate that drains out is nasty dark and stinky, because it is probably anoxic from the moisture at the bottom end. It smells like the bottom of the compost heap, really.
I used the leachate all summer to dump on my fruit tree saplings as the bucket filled up, and with the fertilizer I put on in early Spring it made the Asian pear put on giant leaves and the apple to put on the darkest-green leaves I have ever seen on an apple. The pole beans liked the leachate too. Our summers are pretty dry, so having that reservoir is probably a plus to keep the worm bin good and moist.

I do have black soldier fly maggots and hoverfly maggots colonizing it. Both species are hideous to look at, but they eat things the worms don’t eat. I don’t see a problem with them since I am more interested in the leachate than the compost right now. Also the hoverflies are a native pollinator and thrive on the border of anoxic decomposition where the worms probably won’t go.

I am considering re-leveling the tub this spring, but I hate fixing something that appears to work.