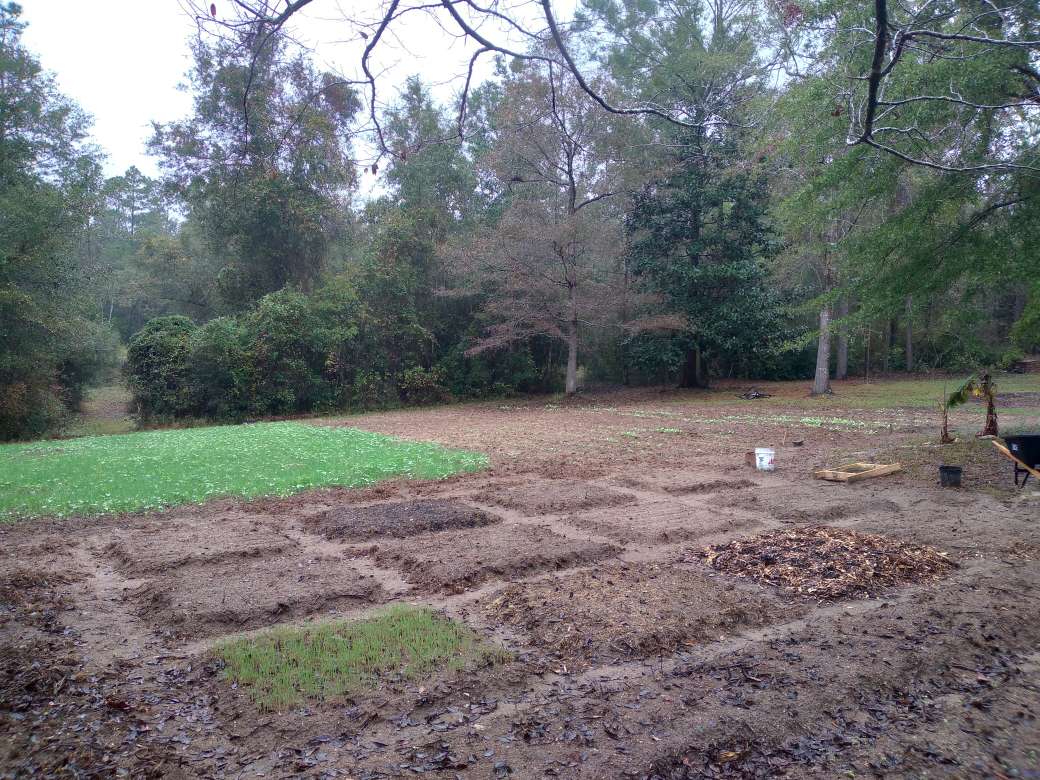 The rain is falling today as Zeta nears the Gulf Coast, but I did get out into the garden this morning with my cell phone to snap some shots and film a short video.

Despite the poor soil, we are starting to have some success.

Out of everything, the multiplier onions look the best. At least the ones growing in Steve’s fertilizer mix do: On the left above is the control bed, fed with nothing. On the right is the bed fed with Steve’s mix.

Someone asked why I gave these onions so much space.

Two reasons: first, I want maximum growth potential. Second, I don’t have to water as much.

Another person asked why I wasn’t using compost as an amendment in one of my test beds. Well… it’s because I don’t have any yet. You can’t use what you don’t have. Remember, we only moved here in mid-August! Note that I took the top 1′ off it. The wire was just too tall at 5′. I’ve been throwing in various things as we have them, including leaves, biochar, paper and cardboard, kitchen scraps and some clay. We need more material – it’s taking too long.

I literally left at least a ton of compost behind in Grenada. Wish I had that now.

Here are the single-row crops: Out of these the daikons are doing the best and the cabbage the worst. It’s super slow. This soil has only had some lime and 10-10-10 and everything is suffering a bit. I hope the rain helps. I’d really like a big pile of mustard greens, cabbages, daikons and turnips.

Now let’s get to the amendment trial beds. First, the cover crop bed is coming up nicely: And seeds are germinating in the other plots. The ones in the lasagna garden look the best so far: Though all the shoots are doing okay, even those in the un-amended beds: The first beds I dug and covered with a mix of cover crop seeds are doing okay but not great. At least they are green. There are some little black insects that have been gnawing the leaves on everything. I plan to spray them with some of my nicotine insecticide after the rains pass. That may help everything grow better.

I may just spray all the amendment beds as well, as having destructive insects taking down my seedlings won’t help our test one bit. In a few weeks they ought to look great as the rows come in – unless we get pounded by rain over the next couple of days. That’s in God’s hands, though, so I won’t worry about it. If seeds and seedlings get wiped out, we will plant again.

I should have a video tour of the garden up shortly on YouTube. I’ll re-post it here when it’s done.

Have a great rest of the day. Stay safe, New Orleans.

Is it too late to plant a garden?
Everything Was Leading Up to This
Prepping and Planting Fall Gardens - and Intercropping!
Hurricane Zeta Garden Aftermath
Chicken Tractors, a Garden Tour and Home-Grown Stress Relief
0 comment
PinterestWhatsappEmail

Starting Lots of Transplants on the Cheap