Even When Everyone Disagrees… You May Not Be Wrong

On Monday I posted a video showing how I was pruning at the solstice to keep fruit trees small in my Grocery Row Gardens:

In the comments, Matthew writes about his small fruit tree success:

“Its interesting this, because I had a disagreement with someone a few months back. They were adamant that fruit trees needed space and needed to get full size. Me planting mine close in a food forest system would not work. Worse I planted one set in a 4 in 1 hole. He couldn’t grasp the fact I don’t want a large apple tree say giving me 100kg of apples and I prefer 4 x 25kg of apples instead. Trying to explain I am not a farmer and I want variety didn’t sink in either. He swore that my garden would fail…… 2 years down the line all our fruit trees bore massive amounts of fruit, and we had to start giving away food (we donated it to charities that gave us food when we had none). He finally is starting to come round.”

The Fear of The Unfamiliar

Ofttimes when something you’re doing is unfamiliar, your friends and family and even complete strangers will tell you it’s “wrong.”

Like growing cassava – a tropical root – in Zone 8 Alabama. 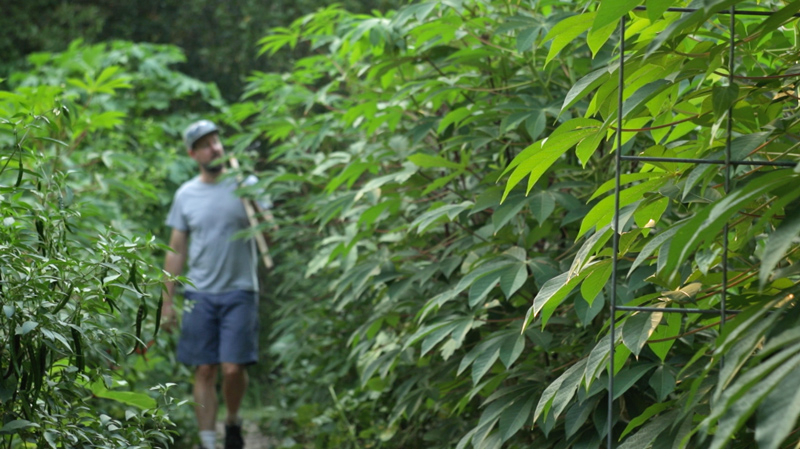 We tried something new and it worked.

Most people cannot grasp the idea that the mainstream isn’t right. They’ll complain about the government and say the media is lying, but it’s just words. Their actions reveal that they are still afraid of being on the outs because when a new (often manufactured) crisis arises, they’ll fall right in line with the narrative and call dissenters “unpatriotic” or “dangerous” or “conspiracy theorists,” etc.

Their actions show you a different story from what they might tell you.

Most people are comfortable sticking with what is mainstream, like fish in a big silvery school, switching opinions and directions when the entire group does so. They see any fish swimming alone as “misguided” at the least and dangerous at the worst.

That said, sometimes you can pry a few fish loose here and there by showing them the results of what you’re doing, whether in your family or your health or in your garden.

Some of my gardening methods were quite alien to my neighbors in Grenada and they followed what I was doing with both interest and criticism. I had plants they’d never seen before and was able to share cuttings and seeds. A few took them and experimented, most did not. The ones that did, though, were no longer in the big silvery school. I learned a lot from some of them, too, so it was a two-way street.

My friend Mike was always experimenting and learning. He was a great mentor. 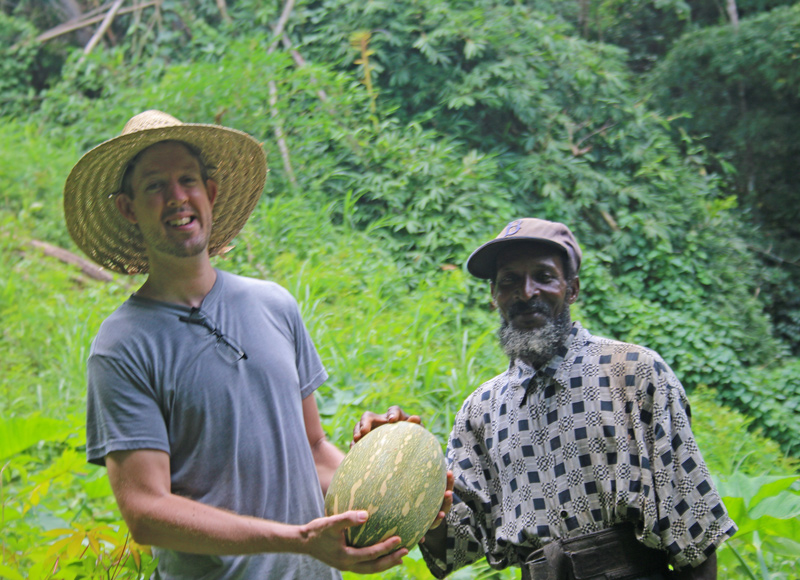 Much of what Mike told me was not familiar or mainstream, in either American or Grenadian agriculture – yet he grew the finest, best-shaped yams I have ever seen and his cabbages, broccoli and lettuces were incredible.

It’s okay that people don’t get you. It’s fine.

People that “do their own thing” aren’t common, and perhaps it would be a more difficult world if they were. Or perhaps not, as mass hysteria seems to throw humanity into one crisis after another.

When I was in the Master Gardener program years ago, my ideas and recommendations were not taken particularly seriously. Now, however, as my influence has grown, I am getting asked to come and speak at Master Gardener events, and my books are being shared.

SHOW don’t TELL is the real takeaway in that case.

When I was talking about permaculture ideas, it didn’t really stick. Now that I have demonstrated them – and added a few ideas of my own – and people can see my food forest projects, read my books, find my videos and understand how it looks and works, they are coming around.

Just as Matthew is leading his critic to a new understanding of fruit trees, you can be an influence in someone’s life for the better.

Just because it’s the mainstream idea or the current thing doesn’t mean it’s the best or it’s the truth. In fact, it’s most often the opposite.

Obviously, it’s not going to destroy you to grow larger fruit trees if you so desire. That’s just a minor example of how being stuck in a paradigm can limit your options. However, if you follow the mainstream on the really important things, you’re headed down the wrong path.

Now back to Backyard Orchard Culture and small trees.

My method of Grocery Row Gardening requires the pruning Ann Ralph teaches in Grow a Little Fruit Tree, which goes back to Dave Wilson Nurseries, as well as to the work of many intrepid gardeners in Europe, particularly the gardeners of France and their work with espalier, step-over fruit trees, etc.

It’s fun to experiment. I haven’t given up on big fruit trees. I love the look of a gigantic pear or mango. Yet we don’t all have the space for big trees and as a garden writer, it’s important for me to work on methods that fit the restraints imposed on most gardeners. I find it fun to watch farmers with big tractors planting hundreds of acres, but it doesn’t really apply to my situation. If you have a small backyard and can grow a wide range of fruit through practicing proper pruning and dwarfing techniques, do it! It’s better than having one gigantic tree that drops hundreds of pounds of fruit in a single week and gives you nothing the rest of the year.

Don’t be afraid to try something different.

*image at top “A School of Fish Underwater” by Isabel Fowler

Get to Work on Your Garden!
Survival Gardening Indoors?
The First Easter
A Starfruit Pruning Discovery
Improving the Ground One Ground at a Time

Can You Prune Back a Huge Mulberry Tree?

Love this post. Learning a lot, piecemeal, from your books.

Jesus isn’t just the narrow gate, he is the ONLY way to the Father. I pray many humble themselves and see that they need the sacrifice He freely gave to restore relationship with God for all who have fallen short (EVERYONE). The times are shorter by the day. When Jesus returns it will be to judge those who have rejected him… so we can get on with a world that God intended, where righteousness is honored, community, and love as He intends plays out all in perfect relationship with HIM.

And those gardens are going to be stellar!!!

In the meantime, we do our best and help each other. Thanks for being a helper. We just moved to South Florida and I would probably be lost without your books.

“Jesus isn’t just the narrow gate, he is the ONLY way to the Father.”

Absolutely. The Way, the Truth and the Life. There is no other path to God.

The “zone 8” reference sounded interesting, and now I’m curious how my location (Germany) compares; but I only found a US map where “8” was labeled “subantartic”; you’re likely not that cold in Alabama? 🙂

Can you point to a resource you found useful to cstegorize locations by “zones” to plan produce?

In the US, we use the USDA Zone Map.

It’s warm here, dropping below freezing only a few times per year.

I have been secretly hoping that we would see a bit more DTG chicken updates in which David veers away from the cornish cross, in a similar vibe to this post. But I don’t really expect it and frankly I see why you might just go the modern way on that one. Most people do.

I usually just eat our laying birds and hatched roosters when I get tired of them. Haven’t raised Cornish Cross in over 5 years. However, I do think the CC birds are the best bang for the buck and the most tender.