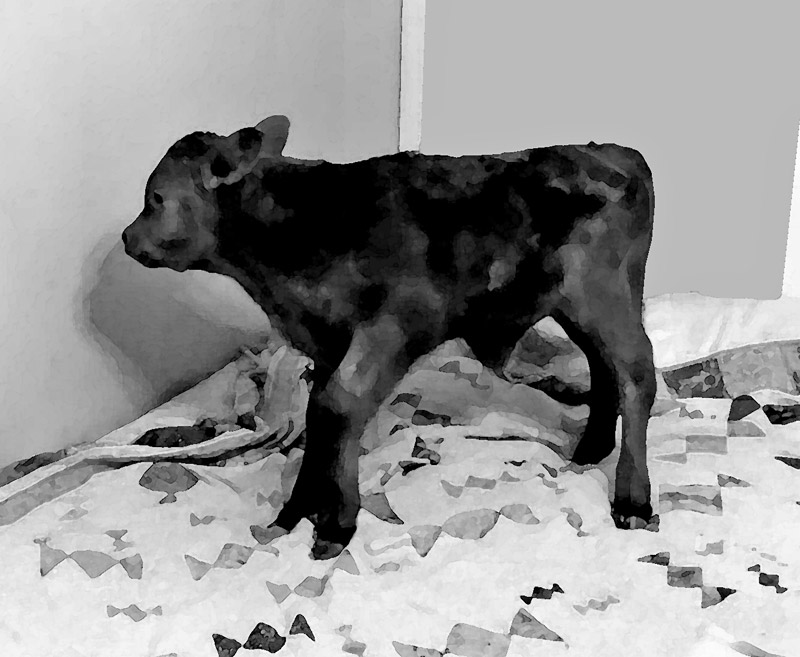 For the last week, our cow Brandy has been with her new calf. We named him “Trouble,” because he runs all over the place, getting out of the fence and driving his mom to distraction.

When Rachel tried to milk in the milking shed with the calf nearby, the calf would run around and make Brandy get frantic and try to pull her head out of the head gate.

So last night I stole him from her.

At about 9PM, I took a few of the boys with flashlights and went into the field. I worked Trouble and Brandy back towards a gate, then took Trouble by the leg and pulled him through, and one of the boys shut the gate before Brandy could pursue. Then I ran across the field with the calf in my arms, hoping that Brandy wouldn’t try to break through the fence.

We made it, and I put the calf in the house for a moment so we could catch our breath.

He then ran around the corner into my daughter’s room and jumped on the bed. 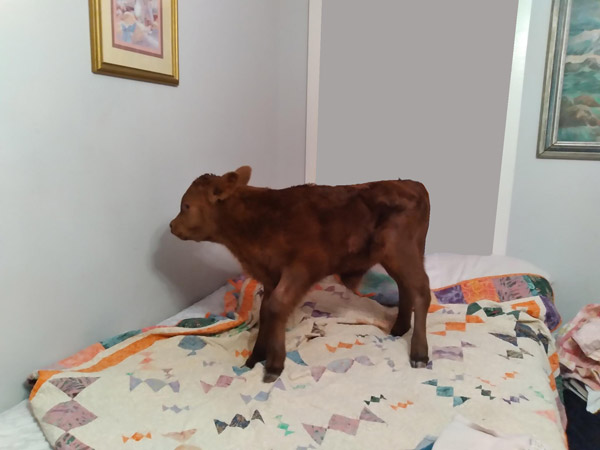 At times like these, I wonder how my life ended up this way.

What series of events led to this point in time?

How did we get here?

Anyhow, we put Trouble in his own enclosure in the backyard, figuring we’d get up early and check on him and his mom in the morning.

This morning, Rachel woke me up at 6:38AM with a cup of coffee.

I grabbed some range cubes and a bucket of feed and she grabbed the milking supplies. We headed over to see Brandy and Sweetie-Pie.

Brandy didn’t seem to associate me with the calfnapping of the previous night, and I led her onwards through the gate to the milking shed and she put her head right through the headgate and munched contentedly on dairy feed while Rachel milked her.

The previous time she had tried was a disaster, as Brandy almost broke down the milking shed looking around for her skittish little calf, who was running past the shed. She also kicked Rachel in the leg, giving her a heckuva bruise.

This time, however, calf-free, she let Rachel milk her all the way out without complaint. We then let Brandy go and put Sweetie-Pie in the milking shed for a bit with some grain and petted her all over. She’s due to deliver in a couple of weeks, so it’s good to get her accustomed to the idea of being in the stanchion.

Rachel got a total of almost a gallon and a half from Brandy. The half-gallon we saved for the calf, and this milk is for us: 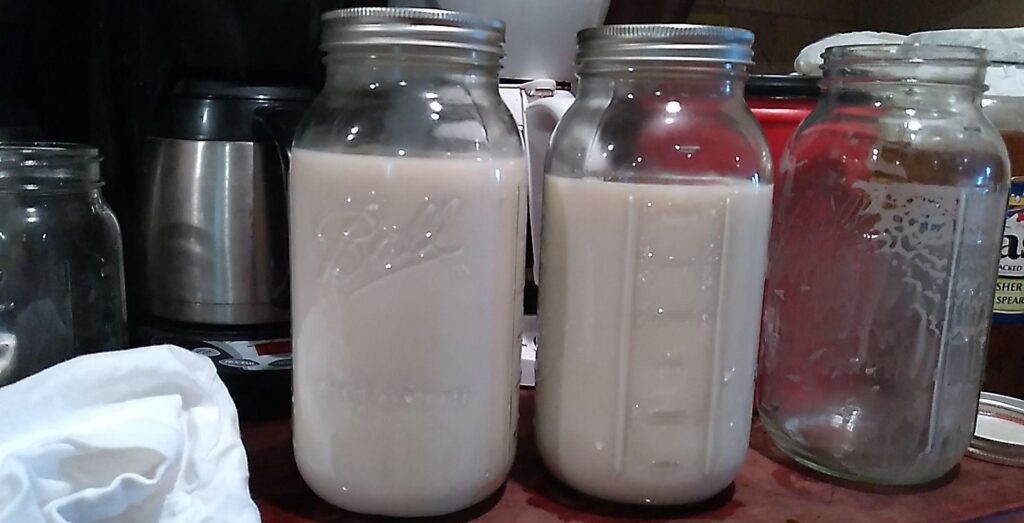 After milking Brandy, we brought water and a bottle of fresh milk to Trouble. We had to corner him and pry his mouth open to get the bottle nipple in, but he started sucking on it after a bit once he realized what was inside.

I think this is going to work. Rachel is determined. We’ll milk again this evening and see how it goes. I think the cows will get used to the system.

As much as I hated to take the calf from his mom, I think this is for the best. He nursed for a week – that’s enough. It’s time to make the cows work for us. He was an agent of chaos.

His mother is calling for him still. It’s sad, but it’s life.

Raw milk is one of the best foods we could possibly add to our diet. And cows make it out of grass! What a system.

That was a great read. Thanks for sharing. Gotta say that I’ve never seen a baby calf on a bed before. Rofl. That was hilarious. Trouble is a fitting name. I hope this works out for you guys.

Lol I love the picture of the calf on the bed.

One thing you might consider for your situation is calf-sharing. Where you leave the calf with the mom for half the day and take him away for the other half (usually people leave the calf with the mother during the day and separate them at night, but you can also do it the other way around and have them together at night but separated during the day). So when the calf is with mom he can nurse, and then during the time they’re separated, the milk builds up again and you can get a full milking in the morning (or evening). The added benefit is you only half to milk once a day, which is good for people who are getting more milk than they need or don’t have time to milk twice a day. It also makes it easier if you want to go away for a few days – you can just leave the calf with the mom and they haven’t forgotten how to nurse, so the cow stays in milk for when you get back.

Yeah, we looked into that but do not have the infrastructure.

“He nursed for a week — that’s enough.” Cue the red lights and siren sounds!
Please tell me you’re not weaning him completely after only a week. Please say that you’ll give him at least 6 months. Please tell me I’m reading this wrong, and you’re just switching him bottle feeding once a day with nursing other times.

Of course not – you missed this: “Rachel got a total of almost a gallon and a half from Brandy. The half-gallon we saved for the calf, and this milk is for us:”

Very cool and I love to read about your problem – solving adventures. A health coach recommended me to get a lot of raw milk dairy in my regular diet, and I’ve been making yogurt with it. It is SO good. I’d like to make kefir too. I’d buy your surplus when you had any 🙂

Sounds like you have things under control! It would be a good idea to get a halter for the calf and start training him to lead — he will get big very quickly, and best to be able to control him. Though the picture of him on your daughter’s bed is hilarious! When people intend to keep a calf to train to be a working ox, they generally start training them at about this age. I imagine this guy is intended to be meat in the freezer, but calves aren’t usually butchered until they are a year and a half to two years old, and it will be easier to move him around if he’s trained to lead.

Also, if you can start feeding him a little grain, you should be able to wean him at three months old, if you need the milk for your family. If you can’t feed grain, or don’t want to, then he probably should have milk for six months.

Thanks for the Good Dairy Farm, Farm Report. We enjoyed the heck out of it….I wonder how many stories like yours our ancestors had that we will never know…I bet there were lots.Time for all us to continue the trend! Can’t wait to show pics of our Grocery row garden.