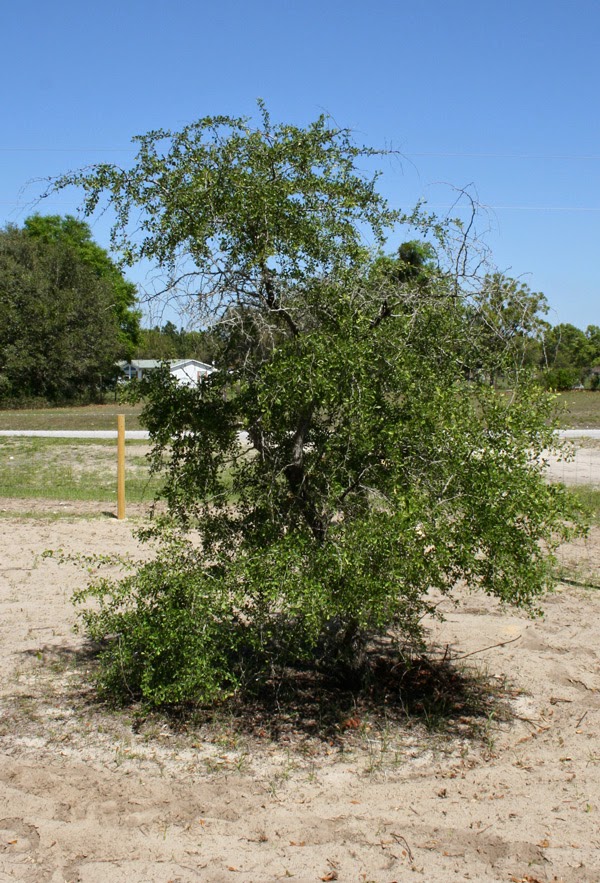 I’ve read that it’s possible to use wild hawthorn trees as a root stock for pear, though I’ve never had the chance to try grafting pears onto hawthorn until now.

While doing a horticultural analysis of a client’s property in prelude to installing a food forest, I discovered a large number of hawthorn trees on the premises (probably Crataegus flava).

Though they have edible fruit, they’re generally said to be bland and only really good for jellies.

Since the trees are thriving on highly drained humus-deficient sand, if it’s possible to add pears to their tops, they’d serve as a hardy rootstock rather than trying to establish new pears.

I shared the idea with the property owner and he was intrigued. The answer: “Go for it!”

Since my own pears were still dormant when we discussed the idea, I cut a good amount of dormant scions from multiple trees and refrigerated them until this last week when we started phase one of the food forest installation.

To start on the tree, I cut off quite a few of the crossing and smaller branches, then picked out which limbs would support my pear scions.

(I use this parafilm tape and this Japanese pruning saw. It’s simply got to be tried to be believed – I can carve through 4″ of oak in half a minute.)

Once I did the initial clean-up, I started grafting pear onto hawthorn branches. Here’s what the tree ended up looking like: And here are some close-up shots: I tied the grafts tightly with flagging tape before wrapping them in the parafilm.

It’s very important to have a tight fit between rootstock and scion. My friend Steven also told me one of the most common reasons for grafting failure is having the scions dry out, so I’m now quite meticulous with my parafilm wrapping or wound seal application (I lost my bottle of sealer somewhere so it was just parafilm on this hawthorn).

Due to the wavy nature of hawthorn growth (the branches are all zigzags) it wasn’t easy to line up my pear scions. Most of the grafts are cleft grafts, though I also performed a few somewhat shaky whip-and-tongue grafts as well, just to see which would work.

I will report in the future on whether or not they took. If they do, I’ll be thrilled and will have opened up another avenue for food forest fruit production. If not, I will have invested an hour of my life in the pursuit of an enticing possibility that didn’t pan out but will have taught me something new.

So, how did they get on. I just heard about the concept yesterday and am wondering about trying it. Also heard that only some species of pear are suitable.

It worked, though the hawthorn shoots are vigorous and need to be kept back so they don’t overtake the grafts.

Not sure which types work the best, but I’d just try and see. Good luck.

Do you have any tips on pruning a pear on a hawthorn? Ours was established two years ago on a hawthorn stem around 3 or 4 ins across, and has already borne a single fruit (harvested this morning). The main graft is shooting skywards like a rocket and is already two metres tall.

I am reluctant to cut it right back as I am told this might make it even more vigorous. But it needs to be encouraged to branch out or it will put too much pressure on the rind graft below.

I just wondered what you did when you ‘kept it back’ and what was the result in terms of growth and fruiting?

I have a little pear tree which my Father grafted onto hawthorn over 10 years ago. I was delighted it survived because I moved it from his garden when he died and it has produced 6/7 small but lovely pears for the past few years. Would it survive another move? I am not sure I have planted it in my small garden in the right place?

I’m not sure if it would survive a move. If it’s giving you plenty of blooms but only a few fruit, the issue is likely pollination.