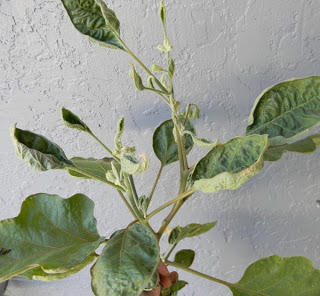 “We were soooooo ignorant! We quit using straw on our garden years ago because it was all no-till, sprayed with glyposate to dry down before harvesting. Stunted my garlic one year. We switched to hay, purchased from a local good-ol-boys feed store, imported from nearby Tennessee because there’s not a lot of hay available here in the mountains. Things went fine for a few years. Until 2019. We had beautiful tomatoes, raised from seed. Planted about 70 in our high tunnel. A few weeks later, we mulched with hay we purchased. Within a few weeks, I started noticing strange growth–curled leaves, nearly naked stems, fasciation on some stems, cherry tomato branches with hundreds of blossoms. At first I thought it was disease but finally realized it was toxin and the culprit probably the hay. We did get some crop but quit selling to our customers who expect organic produce. We removed the hay and hoped all would go well this year. Three weeks ago, we planted our 2020 crop in the same place. Now I really feel stupid. I didn’t see your post when I researched last year, and didn’t learn about Grazon. A post by U of Georgia sent me looking for Grazon info today and I saw your title from 2015. Our tomatoes are, of course, already showing symptoms. We’ll limp through, but not sell. Our one hope is that I planted our determinate tomatoes in another space outside the tunnel. This space also had some hay mulch which killed my pole beans last year, but it was not under plastic and after removing the contaminated hay, it was exposed to rain all winter. I don’t yet see any sign in these tomatoes, but they were planted two weeks later. Two days ago, I took all my “leftover” tomato plants and made a row out in the open garden where no hay mulch was used. We usually plant tomatoes in tunnels due to blight. I am also planting all of my leftover pepper plants out in the open, uncontaminated garden. Jeez. Our tunnel’s plastic is old. If my determinates do okay in the flushed soil (now recovered with plastic hoophouse), we will be sure to remove the plastic from the high tunnel and let it flush out next winter. I just hope that does it. Sickening.”

Look, this stuff is evil. Do not buy in hay, straw or manure. Do not bring in compost. You have to make your own compost instead.

“Thank You for Saving My Garden”

Five years ago we spread cow manure from a friend’s dairy farm on our garden. We didn’t know that the grass the cows grazed on had been sprayed with PastureGard or Grazon. Our tomatoes and beans have suffered for the last 5 years. I sure hope this stuff will ever break down. By now,the tomatoes do eventually grow out and produce tomatoes. The first year after, it destroyed them.

I am so sorry