Grow Grocery Store Sweet Potatoes with this One Weird Trick 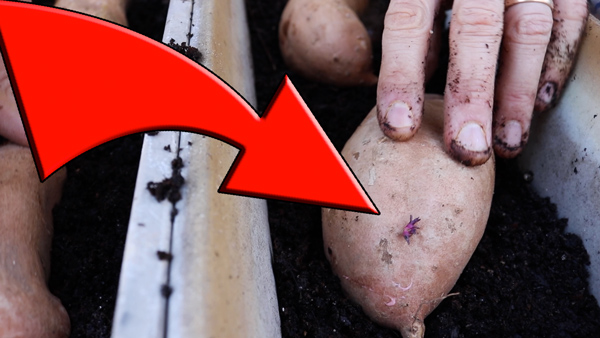 In my latest video I demonstrate my easy way to start sweet potatoes from the grocery store:

How to Grow Sweet Potatoes from the Store

Welcome back. Today I’m going to show you how to go to the grocery store.

Today i’m going to show you how to take what you got at the grocery store – that is sweet potatoes – and sprout them and use the resulting sprouts to plant your garden with sweet potatoes.

We’ll sprout them in some of these little window box things that I found. Somebody got rid of them. And here’s some potting soil.

This is the best way to start sweet potato slips of your own and it’s really easy. Now you’ve probably seen people starting sweet potatoes with toothpicks in the sides stuck in a jar of water. I did that when I was a kid many times actually, and i even started my own sweet potato beds that way with slips. But I don’t do that anymore for one reason: they tend to rot sometimes. And another reason is that when they rot they smell really really bad, so basically those are two reasons nested together.

I’ve had less trouble with them rotting and I’ve had good results by simply taking the potatoes and putting them down into some potting soil and covering them over. This is a little more natural, kind of like they would be growing in the ground.

This soil is slightly damp already so I don’t really need to water it. It’s actually pretty wet so all i got to do is stick these guys
in here. I probably could have stuck all six just in one of these. It doesn’t matter if they’re really buried all the way but i’m gonna be neurotic about it and bury them all the way.

Now all I gotta do is go stick these guys in the greenhouse and wait a few weeks because they sprout pretty quickly when it’s warm. They need that warmth! If it’s cool they don’t really want to grow. This is a tropical crop and it’s about a month until it’s really time for me to plant these in my climate, so if I can get them started now and get a bunch of little vines going I’ll have them ready to plant out my garden right at the right time.

You don’t actually have to have a greenhouse to do this. You can start sweet potatoes on a sunny window or back porch or whatever. I have some that I started that way and I’m gonna show them to you now and demonstrate how it works and what you do next because we have to wait on these and i’m not gonna wait three weeks before putting this video out.

This right here is a pot with some sweet potato ends. My wife was cooking sweet potatoes and I took the ends off because they were starting to sprout and i planted them in this pot and I stuck them on my windowsill a couple of months ago.

As you can see they’ve grown like crazy, though they are not the happiest looking things in the world because they were inside of a shady interior and then they got moved outside and it got a little cold they got burned and stuff but they’re just fine.

They’re still good and it’s not hard to do this! Even though these don’t look perfect it doesn’t matter – they’re going to grow.

As a matter of fact when I was a kid there was a lady that lived behind our house and her name was Marie. She was quite old and she had a dog and the dog’s name was Rebel. That dog was mean and we were scared to death of that dog and we were scared of Marie as well, but occasionally we would help her in her yard and do things for her and I remember she had a  hanging basket on one of her back trees and I said “what is that some sort of an ivy?”

And she said, “no, those are sweet potatoes. My Bill planted those.”

So I’m going to take these and we’re going to prepare them for the garden and then we’ll go plant them out so you can see exactly how that works. You see these are just the two tops here I can go like this and just break these guys off the side. Look how they already come with a few roots! I can just stick them right in the ground or I can take it and nip it like that and get a little piece of vine and then I just go ahead and trim off most of the leaves and they are nice little slips that are ready to go out in the garden.

Sweet potatoes are actually a perennial. If it doesn’t freeze they just grow continuously on and on and on and on. But in my climate here they’re going to freeze in the winter so you’ve got to put some potatoes aside and then start them at the right time to be ready for the next season and if you’ve got a nice long hot summer you can get a ton of sweet potatoes.

Incidentally if you guys like my “Compost Your Enemies” t-shirt they are for sale. Aardvark Screenprinting makes them for me. It’s a family company in Alabama and i’ll put a link below. I love their stuff and I like that it’s a family company as well.

Now you see i’m cutting these way back here these vines are going to grow back. These will grow again. If you keep them watered they’ll come back again and again and again and keep growing you more vines for the garden and you could just keep planting out in succession.

Let’s take these out and plant them. We’ll stick these guys here underneath this plum tree. I accidentally cut all the leaves off of a couple of these, but it doesn’t really matter – they’ll grow back.

Now this plum will have a little ground cover underneath it. That’s really all you have to do. They will root in the ground. You just make a hole and stick them in. For a couple of days they’ll wilt like crazy and you’ll think that they’re dead but they’ll come back.

This is a little early for me to be planting these but we’ll see what happens sometimes it’s good to plant early and then hey, I’m gonna have plenty of them starting. If we get a freeze I’ll just do it again.

That’s how simple it is to start sweet potatoes from the store. One year I got one of these little assortments. It had a purple one, an orange one, and kind of a yellowy one and a white one and it was this little frou-frou assortment thing, a “ready to steam
sweet potato assortment” I got from Publix supermarket which is a really popular supermarket in the south and I planted all of those. We just had a flat of soil and I stuck them in there and as the vines came out I planted them out to my garden in North Florida, and when we harvested sweet potatoes we had all kinds of crazy stuff.

If you go to the Caribbean market and get what are called “boniato,” which is a less sweet variety of sweet potato which usually has red skin on the outside, but usually redder to even pinkish and the inside of it is white and it’s starchier. It has a different flavor and you can grow those the same way. You just go out and collect your sweet potato varieties from whatever market you want to go to and stick them in some flats, throw some dirt on them, and plant them out.

I hope that was useful to you. I am always game to save a few bucks and sweet potatoes are cheap compared to going out and buying a little nine pack of slips. You can just make your own and you can just keep getting them. This pot will just keep making them and making them and making them for years. If these things are happy they’ll start to make bigger roots in there and they’ll just keep shooting roots out. If I had a bigger pot I could probably just perpetually produce slips on and on, ad infinitum, into the future.

Try it! It’s super easy and it works better than the little toothpicks in water method.

And until next time, may your thumbs always be green.

The Remarkable Secret Behind Her Beautiful Gardens

Identifying Nitrogen-Fixers in the Wild

Do you have a good method for curing the harvested sweet potatoes? I grew a bunch of slips for the first time last year, harvested right before a freeze, but the curing method didn’t work. The steps I tried were one week in the dark with high humidity followed by 3 to 4 weeks of cold dry storage. Unfortunately mine all sprouted one week into the cool storage phase. I feel like I’m missing something simple here.

That is awesome! Thank you so much for sharing this! I figured there was some way to do something with grocery sweet potatoes (like you can easily do with onions and stuff) but I wasn’t sure exactly what I needed to do. Here’s my answer.
And Living in S Florida this will work great for me. 🙂