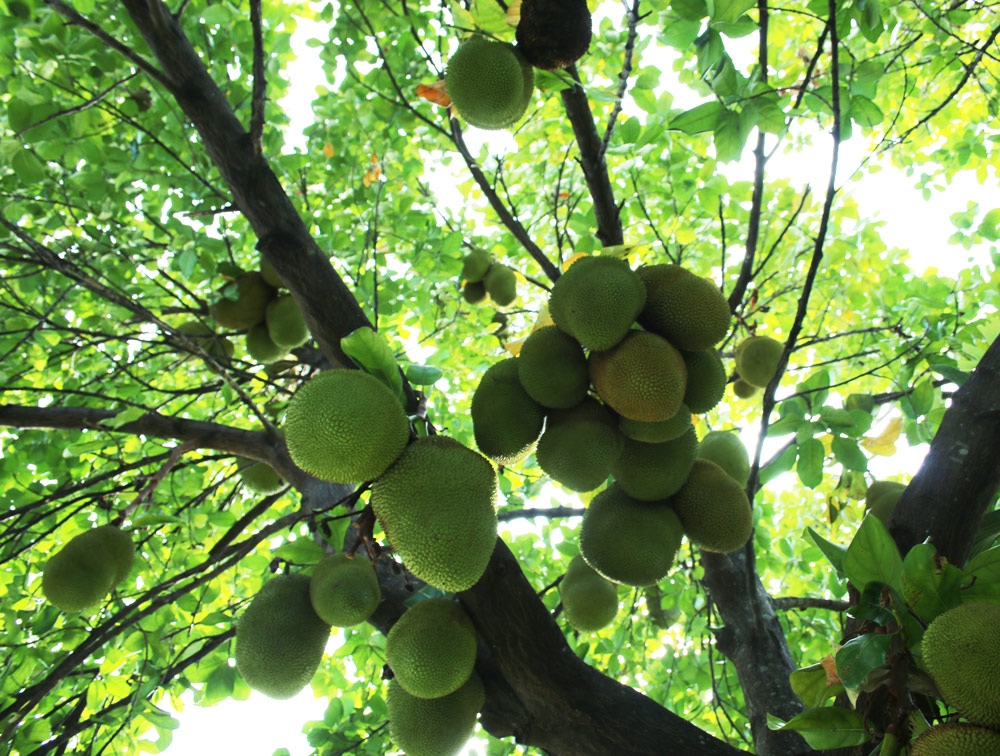 After my post on Growing Jackfruit in South Florida, I received an email from a regular reader requesting a post on growing jackfruit in North Florida.

He also sent me a link on the power of jackfruit as a superfood which also fights diabetes – check this out:

“One of the most powerful health benefits associated with jackfruit is its ability to fight diabetes. This potential of the fruit is just beginning to be fully explored, in part because the best way to use jackfruit for diabetes is to consume the unripe fruit, which is not a common practice outside of the regions where it is grown.” It would be quite tough to pull off growing jackfruit in North Florida since it’s definitely a tropical tree, but I’ll give you my suggestions.

Is it Possible to Grow Jackfruit in North Florida?

Yes, if you have an almost impossibly good microclimate or a greenhouse with some SERIOUS headroom!

You can grow them the same way I postulated you could grow coconut palms outside their range. I know this because my friend Craig grew a jackfruit tree inside his greenhouse-over-a-pit in Citra, Florida. Plant right in the ground, though, and prune like mad.

Jackfruit aren’t a small tree and they don’t like being constrained in pots… however, they really are easy to start from seed, so you don’t have to spend much of anything if you want to experiment with growing them outside their range. Only fresh jackfruit seeds will germinate. They look like a large bean. Throw some in your compost pile and they’re likely to come up all on their own, as my friend Amanda discovered.

She sent me these pictures of seedling jackfruit a little while back: Another possibility is to be really clever with your south-facing wall. I grew coffee, key limes, guava, black pepper and lemons next to my south wall in North Florida. Judicious pruning, tying down branches and keeping the trees tight to the wall could help you grow jackfruit in North Florida… but still, those trees get big! I’ve never heard of anyone espaliering a jackfruit – you could be the first to do so!

I might start the tree from seed, letting it grow straight up, planted towards one end of the wall, then bend it sideways as far as I could once it got big. Or start it in a big pot, then plant it way bent over along the ground. Weighting it down with cinder blocks might work, too.

The book Agricultural Options for Small-Scale Farmers has a report on page 202 that reads:

“‘The… jackfruit usually bears its large fruit (up to 80 cm in length) on the trunk and main branches, high up in the tree. In the Songkhla Province of Thailand, the young jackfruit is planted over a large stone or metallic plate, thus blocking the growth of the tree’s tap root.’ As a result, fruits grow in clusters around the base of the trunk.”

This would be very helpful in a small space!

Once a tree reaches up past the edge of the roof, that part is going to freeze off on a cold night. Your goal is to dwarf the tree and keep it from getting that tall.

Another possibility might be to grow a jackfruit tree on an island in the middle of a pond. Or on a big raft in your swimming pool. The radiant heat overnight could keep it alive. Maybe.

I planted a jackfruit seedling in my North Florida food forest once and it froze to the ground. The next year it came back from the roots, then froze down again that winter and failed to return.

Growing jackfruit in North Florida is a serious challenge. I’d never recommend it to a beginner, but it’s totally something I would try myself until I pulled it off.

If anyone tries it, please let me know what happens!

@The Prepper Project: How Much Land Does It Take To Feed Yourself
Hehhehheh
Herrick Weighs in on Tire Gardening
Does Coffee Cause Cancer?
Improve Neighbor Relations with These Tips for the Edible Landscape
18 comments
PinterestWhatsappEmail

How Long Does it Take a Jackfruit to...

Hi David, I really like your blog. I live in drought stricken So. CA. On the other edge, of the continent.
Would Jack fruit grow in my climate? It seldom freezes on the West coast here. Does it need lots of water? We do not have a humid climate. The air is more dry. This would be my other question? What will do well, in my climate?

On another topic, if I may ask. I am interested in keeping Bees, on my lands. Do you know anything about beekeeping?

Thanks for the kind words.

You can probably grow it there but you’ll likely need to irrigate to keep it somewhat happy. I’m betting lots of compost and mulch will help a lot.

Thanks David! I was thinking of keeping it potted, being concerned about tree roots being close to the house foundation (especially with such a large tree). Interesting idea about blocking the tap root. I would expect that keeping it potted would accomplish the same thing. Maybe a very large pot… I’ll keep you posted.

Let your fear fall from you. What’s a dumb old house foundation compared to GROWING 100% REAL NATURAL JACKFRUIT OUTSIDE ITS NATURAL RANGE?

Oh you’re so right! Why, with a jackfruit tree and my Diascora collection, I might never need to buy food again.

@David, an interesting experiment if that person tried to go the espaliering route would be to grow it in a pot at the start. Once the tree gets to the height where the person wants to start espaliering the jackfruit laterally, have them lay the pot on its side almost at a 90 degree angle. The tree should start bending its branches upward toward the sun, creating a tree shape that has about a 90 degree angle. When it has, turn the pot back upright and then tie the sideways branches in place so that they don’t readjust to the new sun angle, and then plant the tree in the ground. That should at least get the initial lateral growth that avoids having the tree grow too high. I saw a YouTube channel where a guy did this for his tomato plants (mhpgardener). Pretty interesting.

Hey thanks Shane! I will try it!

Gotta be honest, didn’t know there was such a thing as ‘jackfruit’ before reading this

Reply
Open a Jackfruit the Easy Way: an Illustrated How-to Guide to Opening a Jackfruit - The Survival Gardener September 15, 2016 - 6:01 am

Hi Dave – concerning gardening in NF, I have a bunch of citrus trees growing. I just put them in the ground (they were in pots on my back porch for a couple years). Now they will be exposed to north winds this winter. Can you recommend a wind break to help protect them? I was thinking since lemon grass is evergreen I could surround the tree trunks with a couple of those? Any suggestions would be most appreciated.

Not a bad idea – sorry for the very late reply. Comment got trapped. I would still cover them, though.

I….wonder how its going for you. Long time.

I am trying out methods for Jackfruit in South Georgia.

I will keep you posted.
I hope you and yours are doing well.
We enjoy the videos.
Thanks

I am in green cove springs just south of Jacksonville and moved from Miami because I wasn’t gonna keep my kids in the virus regime lifestyle. Done! Living in south Florida for so long, I couldn’t help myself but to start many jackfruits, mangoes, guava, sugar apple, and as soon as I can get some seeds, guanabana. Of course I started like 30 papayas too. I have my “tropical” area on the south side of my house, fenced in to keep my ducks and the deer from eating my plants…. in Miami, I just had to worry about Cubans getting to my fruit… whole other problem haha.

Zone 9a will be a challenge once winter hits but I am determined to win the battle keeping my jackfruit trees happy. The tropical area will be covered in winter and my dryer vent will help heat the area once encapsulated. Duck poop, leaves, biochar, and other compost is keeping all my trees very happy right now. I will keep you posted about my success. I drive around up here and have seen some nice mango trees growing next to houses with lots of fruit which gives me hope

So happy to hear. I’m in Jax and my 4 1/2 year jackfruit just started producing fruits. I have a Mango started as well.