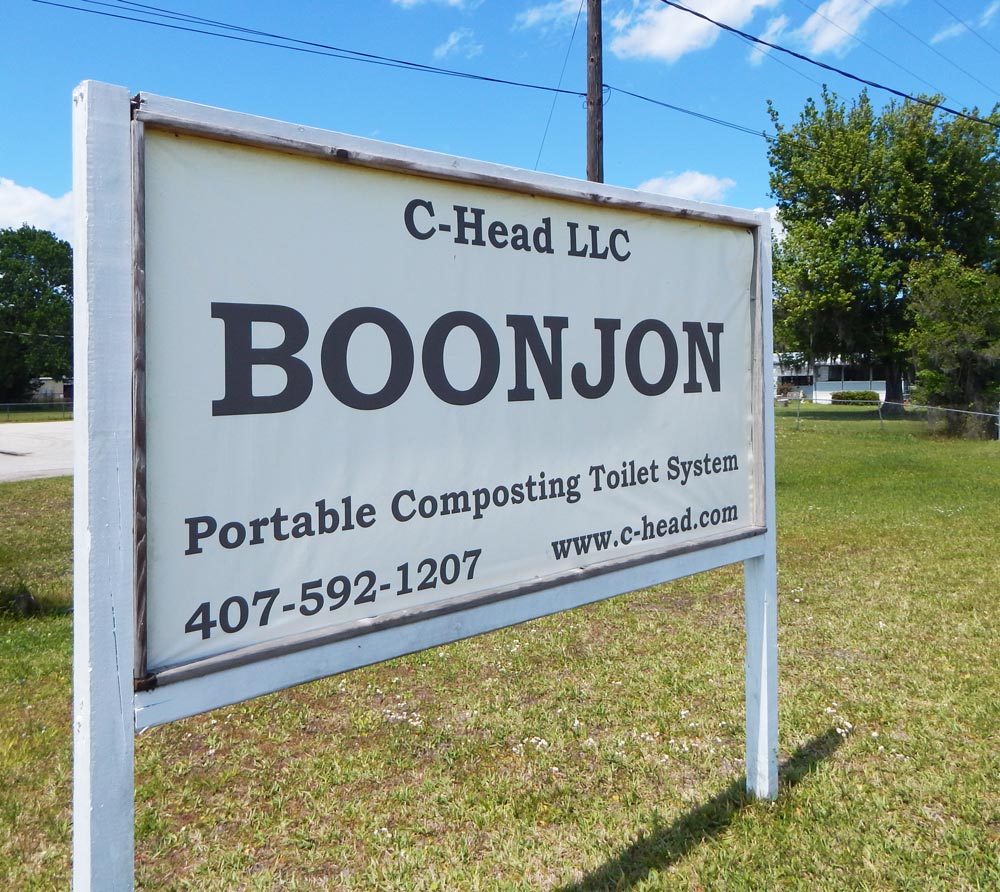 At the beginning of April 2016, we left our homestead in North Florida and headed south to Ft. Lauderdale, and then, after spending almost a month there, we headed to our new home in the tropics.

On the way out of town, I recorded this video with Sandy Graves of C-Head LLC:

That ended up becoming my third most viewed video on YouTube. Who would’ve thought that a composting toilet would be so popular?

Sandy is a charismatic guy and a great inventor – I’m glad we met. For a few years I had planned to visit his place and see his system and just didn’t get around to it.

It finally happened on our way out of town for the last time. As we left the Ocala area and drove east on 40, we came up on his office and I said, “Man, I never got to meet Sandy in person and see his setup… I should have done that… now I’ll never get to…”

Rachel said, “We could stop!”

“I suppose so, and I have the camera… well, what the heck!”

So I did stop. We had only been on the road for perhaps an hour, our van loaded up with clothing and children, the small trailer behind us hauling the remnants of our worldly possessions.

That’s our beat-up old van and a u-haul trailer, getting ready to head south to Ft. Lauderdale in preparation for our final move to the tropics. Hard to believe it all happened. God is good. #tropics #expat #providence

Meeting with Sandy was great and we ended up spending a couple of hours together.

Later, he signed up as one of this site’s sponsors – really cool. Check out his website here.

The crazy thing was really the trip, though. I still can’t believe we pulled it off. I sold my plant nursery, got rid of 90% of my book library, gave away tools and a piano, furniture and fencing, barrels and lumber. Years of homesteading accumulation – gone. I even sold my guns and some of my guitars.

Do I regret it? No – not a bit. We left behind a collapsing country and sociopathic relatives and now live in a level of freedom we never experienced back in the US. Sure, it’s hard to adapt to a new culture but it’s fun if you look at it as a grand adventure.

Soon it will be the one-year anniversary of our arrival here.

Why, O Lord, do you stand far away?
Why do you hide yourself in times of trouble?

In arrogance the wicked hotly pursue the poor;
let them be caught in the schemes that they have devised.

For the wicked boasts of the desires of his soul,
and the one greedy for gain curses and renounces the Lord.

In the pride of his face the wicked does not seek him;
all his thoughts are, “There is no God.”

His ways prosper at all times;
your judgments are on high, out of his sight;
as for all his foes, he puffs at them.

He says in his heart, “I shall not be moved;
throughout all generations I shall not meet adversity.”

His mouth is filled with cursing and deceit and oppression;
under his tongue are mischief and iniquity.

He sits in ambush in the villages;
in hiding places he murders the innocent.
His eyes stealthily watch for the helpless;

he lurks in ambush like a lion in his thicket;
he lurks that he may seize the poor;
he seizes the poor when he draws him into his net.

The helpless are crushed, sink down,
and fall by his might.

He says in his heart, “God has forgotten,
he has hidden his face, he will never see it.”

Arise, O Lord; O God, lift up your hand;
forget not the afflicted.

Why does the wicked renounce God
and say in his heart, “You will not call to account”?

But you do see, for you note mischief and vexation,
that you may take it into your hands;
to you the helpless commits himself;
you have been the helper of the fatherless.

Break the arm of the wicked and evildoer;
call his wickedness to account till you find none.

The Lord is king forever and ever;
the nations perish from his land.

O Lord, you hear the desire of the afflicted;
you will strengthen their heart; you will incline your ear

to do justice to the fatherless and the oppressed,
so that man who is of the earth may strike terror no more.

Azolla and duckweed as fertilizer? You bet!
Homemade Composting Toilets
4 Simple Ways to Get Rid of St. Augustine Grass
Papaya Growing in the Compost
The New Humanure Composting System

How To Make Free Liquid Fertilizer from Almost...

Compost Everything: The Good Guide To Extreme Composting

It has gone by, so quick! And so much has happened in that time. Enjoy your party. 🙂

Wow, a year already! Glad you made it to a land of tropical crops and ocean breezes. And glad I found your vlog and website. It brightens my day from my small, damp, grey, Atlantic island. God bless.