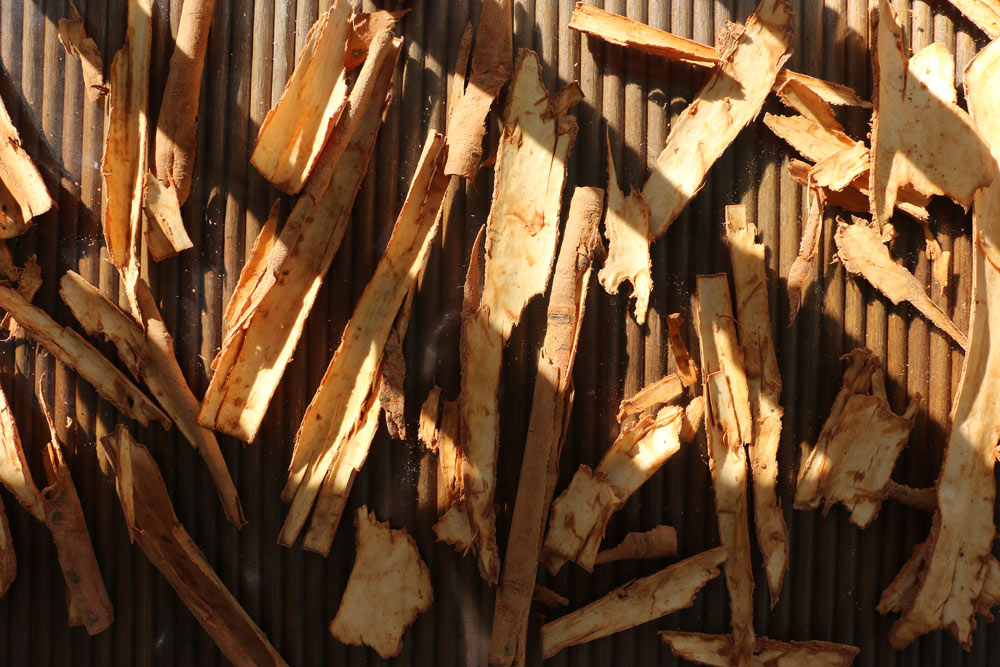 I spent part of Saturday harvesting cinnamon and processing it.

One of the most delicious spices in the world is cinnamon – and, joy of joys, we have a cinnamon tree growing on our property – and I figured it was about time to harvest some and share the process with you.

Unlike most spices, the portion of cinnamon we use in cooking is the bark. Cinnamon sticks

Harvesting cinnamon requires taking down a good-sized branch or trunk, removing the gray outer bark, then peeling and drying the delicious inner bark.

We harvested enough cinnamon for a year’s worth of cooking (at least), though now that we have such a ready abundance I might start finding new things to use it for.

Most of the trees I see around here are in the 25′ range. The one I harvested from was maybe 20′ and is probably a younger tree.

Essentially, cinnamon harvesting is just a matter of cutting down some branches or the entire trunk of a tree. There seems to be a time of year that it’s better, so to figure out when that was I just spied on my neighbors and waited until one of them harvested some. Heh.

Cinnamon is propagated from seeds and I’ve seen baby trees scattered here and there all around the woods here. When I get my own land I hope to dig some saplings up and plant a hedge of them that I can cut as needed for a regular supply of cinnamon.

Also according to Infogalactic, one common method of harvesting cinnamon is “growing the tree for two years, then coppicing it, i.e., cutting the stems at ground level. The following year, about a dozen new shoots will form from the roots, replacing those that were cut.”

That would work well for me. The hard wood left after harvesting the bark can then be used for charcoal production. You can also use cinnamon leaves to make cinnamon tea, which is pleasant and good for you.

The rough outer bark of cinnamon isn’t flavorful or pleasant to eat, so that is scraped off.

You want the inner layer, which you can see is red-orange: It gets a lot redder as it oxidizes and dries.

After scraping off the outer bark, score and peel off the inner bark in sheets. It’s crumbly and if there are any knots in the wood they’ll break the bark as it peels, but don’t worry about getting it perfect.

Chances are you’re going to grind the stuff anyhow.

Here’s some of the peeled cinnamon drying out: Harvesting and processing cinnamon is a great afternoon project.

For those of you who aren’t in the tropics, cinnamon is a tropical tree but can take some cold. Chances are good that you can grow them up into north Florida or so with some protection, especially when the trees are young.

Cinnamon’s cousin the camphor tree (Cinnamomum camphora) has invaded that whole range, so that may be a good precedent.

Interesting experiment: I wonder what the inner bark of a camphor tree might taste like in cooking? Or as an herb?

Someone go peel a branch and let me know! I would totally be doing that RIGHT NOW if I still lived in Florida.

Growing fruit trees in poor soil
Bilimbi: In Search of Ghost Fruit
Raising Meat Chickens with Marjory Wildcraft - Free to Watch!
Yesterday's Livestream
What to Do When Your Compost is Too Wet
trees
9 comments
PinterestWhatsappEmail

Great article. I thoroughly enjoy most of your work. Not ready to try camphor bark any time soon, though. I shared your comic on survival gardening with a group of kids, they had fun coloring in the pictures. Glad you survived your encounter with the “Bafeemus” or however it is spelled.

Hey – thank you. I’ll bet the children enjoyed that. My kids liked watching me draw the book. 😉

I love the Silky saws and have owned many and broken a couple. It happens to me when sawing too vigorously and the tip catches on the forward stroke causing the blade to flex and the tip to snap off. Have not had the base snap yet, luckily.

Like me, you saw like a wildman. Now I try to go a little slower and make sure not to put much pressure into the forward stroke, as all the action happens on the pull.

I think that’s almost exactly what happened. I just need to calm down and saw safely. Heh. I am going to buy another one – they cut like nothing else. Thanks for stopping by, Paul.

I got a soup spoon made from the wood left over from harvesting cinnamon bark. Best spoon for soups cause if flavors the bean soup. Last summer I was gifted a pimento sapling. Like the cinnamon leaves, I add the pimento leaves to my beans
Enjoy your cinnamon.

That is very cool. Cinnamon soup!

Pimento – as in “allspice?”

dear david-
aren’t there 2 varieties of cinnamon sold on the market–a ‘real’ and a ‘fake’? (ie, they’re both real, but one is higher quality, with different 2ndary effects, i guess)..which do you have?
i’d be interested in growing a tree here in No CA, where we only get a few hours of less than 30 F here a winter. if you have the ‘good’ cinnamon, i’d be interested in purchasing seeds from you! thanks!

You are officially the coolest person I know today.