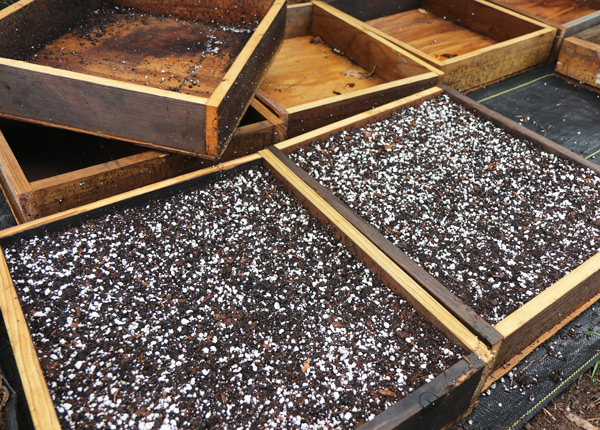 Just over a week ago, I had one of my sons make me ten wooden seedling trays I could use to start seeds: The first two sets of seeds I planted were Hungarian Heart tomatoes and a hybrid pak choi, as you can see in my latest video:

I just posted that video a few minutes ago, though I filmed it last weekend. The pak choi came up first, and the tomatoes are starting to come up now. They look great. The pak choi in our gardens are thriving, so I decided to start a bunch more transplants to put out later. Note all the cut stems! We’re eating them every day now, and I only have a half-dozen or so. Unlike most of the brassicas I planted, the pak choi looks amazing and shrugs off heat, pests and disease.

I like to plant a bunch of things, then double down on what works, as I share in Totally Crazy Easy Florida Gardening. It just makes sense. If any of my tomatoes really take off, I’ll replant the easiest to grow varieties and probably forget growing the rest.

Next thing I’ll do is start some papayas and maybe some tobacco.

Start Your Spring Garden Now
Pictures from the new gardens
Yeah, so this thing was way too hot
The Original Victory Garden
Does No-Till Gardening Work on Clay?

Are Tire Gardens TOXIC? The Case For and...