How I Grow Watermelons 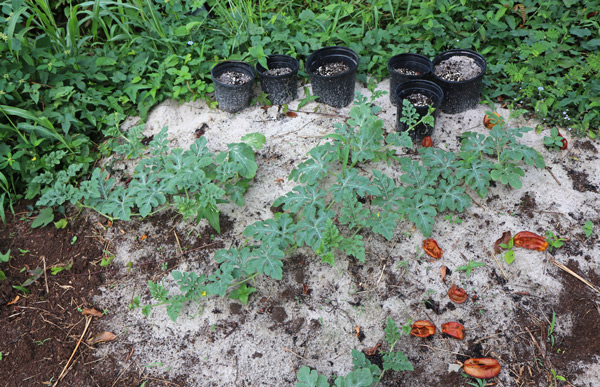 How I Grow Watermelons – a post by Ezekiel Good

I grew my first watermelons when I was six or seven years old. I was at our local farm store with my dad, and I suddenly saw a rack of seeds in a corner. A walked over and found my mom’s favorite variety of watermelon seeds: Charleston Gray.

“What are they?” he responded.

And that was how I got my first watermelon seeds.

Of course, my dad being the best gardener in the country, he encouraged us to plant our own garden beds. As soon as we got home I planted my new watermelon seeds and within the week they were sprouting all over my garden.

Unfortunately that episode did not turn out too well, because I planted them too near the time of frost, and we had to pull them up. But as my dad says, you have to fail until you succeed.

How to Grow Watermelons

I have now grown a lot more watermelons, and so I am not getting that kind of failure any more. 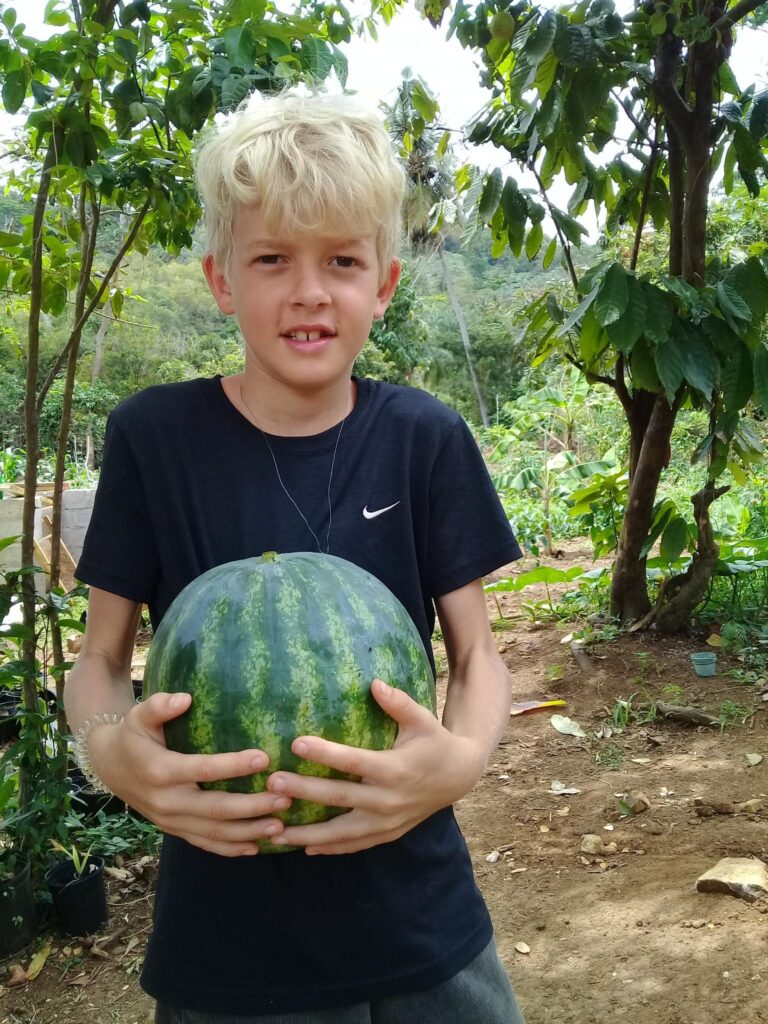 A 10lb watermelon I grew in the Caribbean

Here’s how I grow them. All you have to do is go to a farm store during the middle of February, and they should have watermelon seeds in stock. Buy a few packages, take them home and plant them when most of the risk of frost is over, although don’t plant them too late, or the pests will get them.

Make mounds about 6′ apart in all directions. Put in a handful of fertilizer, compost, or Steve’s Mix when you make the mound. Then plant four seeds in each mound.

Seeds usually come up in a week or two, depending on how cold it is outside. If it’s still chilly, they won’t come up for a while, and if they do come up, they won’t grow fast. Watermelons like warm weather!

I water them daily when they are babies, but when they are big I water about twice a week. If you water too much when they’re fruiting they will be watered down and will be less sweet.

In eighty to a hundred days you should have some incredibly sweet and juicy watermelons. 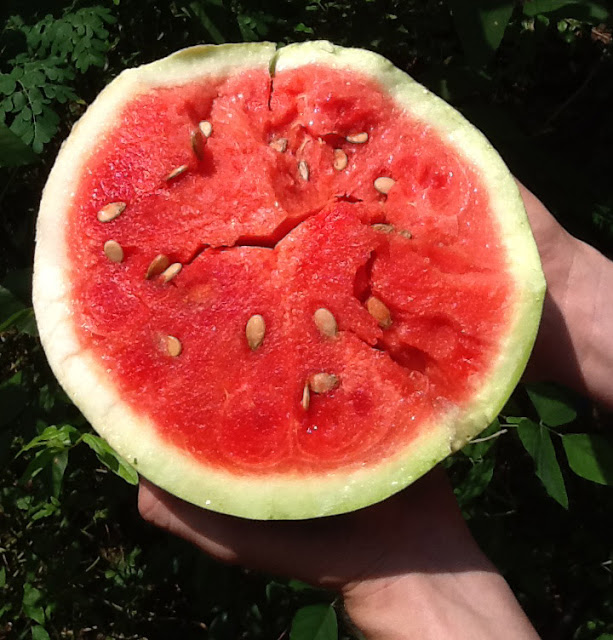 Once you learn how to grow watermelons, you’ll be able to truly enjoy summer!

Once harvested you can cut them up and put them with some other fruit in a bowl, instantly making some of the best fruit salad you’ve ever tasted.

Or you can just chop watermelon into triangles and eat it by itself, either way they will be some amazing fruit.

Watermelons are pretty easy to grow, although not as easy as potatoes, turnips, cabbages, or their cousins the pumpkins.

The Downsides to Watermelons

Yet there is a problem with watermelons.

You have to supply watermelons with the right amount of lime, a common fertilizer you can buy at any farm store, or else the melons will get blossom-end rot, which makes your watermelons turn black and rot off the vine. Blossom-end rot can also happen if you have alternating periods of wet and dry weather, as the fruit is trying to grow fast but is being held back by drought, causing the roots to be unable to get enough calcium to the melon.

Rot issues may also happen if melons are lying on very damp soil, so I suggest creating drainage ditches if your area is prone to flooding. You can also lay cardboard down to keep the melons from sitting right on the soil.

Another problem with watermelons is that they do not store well. You can only leave them on the counter for about five days until they start rotting.

Don’t let these issues get in the way of you growing your own watermelons!

Why would you grow zuc—– or eggplant when you could grow watermelon? Or basically anything else?

Watermelons refresh you at the hottest time of day, they are deliciously crisp and sweet, the seeds are cheap and they are easy to grow.

The Watermelon Landrace Project (And Corn, and Pumpkins!)
How Joseph Lofthouse is Helping Me Grow Watermelons

A Real-Life Tale of Extreme Free-Range Chickens – in a Predator-Rich Area!

How Joseph Lofthouse is Helping Me Grow Watermelons

Thanks, Ezekiel. Any advice on the best time to harvest?

It usually takes around 80 days for fruit. To check when ready, look at the tendril nearest to the stem. If it’s wilted or shriveled, the melon is ready to pick. That usually works for us. -EG

You almost typed the Z word! Do you thin the mounds to one plant or is 4 plants ok with that spacing?

Great post, Ezekiel! Melons are one of my favorite things to grow, but we have very poor soil and my melons tend to grow to about the size of a tennis ball and then just stop and ripen. A few will get bigger but I can never get them quite to bowling ball-size. Any tips on what to feed them to get them to a good size?