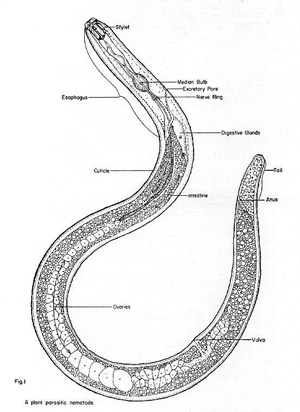 Ready to learn how to kill nematodes naturally? Well… let’s see if we can pull it off!

Nematodes are little worms that chew up roots, reducing plant vigor and generally messing up your plans for a healthy garden.

We hates them, precious. We do!

I pulled up a row of bush beans a couple of weeks ago and found that the roots were amazingly knotted – and not with nitrogen-fixing nodules. Nope, that was nematode damage.

So How Do I Kill Nematodes?

I’ve read that lots of compost will keep their populations down – yet this bed was filled with compost. Loaded with it. And still, my beans were getting chewed to bits. Don’t believe me? Look at this! Creepy. It’s obvious that we have a problem here.

I’ve read in another place that nematodes don’t like cabbage or mustard leaves tilled into the soil. I also know that wormwood kills a variety of parasitic worms.

So… I decided to make a concoction. Look at that! What IS that?

Well, the white leaves are wormwood (a worm killer – nematodes are worms, remember?) from my front garden. And I also shredded some collards to mix in, since I didn’t have mustard or cabbage lying around.

Then I got crazy.

That means I have caffeine, nicotine, phytolaccatoxin, toxic latex, cycanide, capsaicin, pyrrolizidine alkaloids, anthraquinone and various aromatic oils, along with a laundry list of other minor compounds.

After mixing all these things together, I covered them with water and let them rot into a toxic stew for a few days in the sun… then poured it into my bed. That would kill us and I’m betting it kills nematodes too.

Suck on my beans, will ya? Then suck on this!

UPDATE: Since applying this awesome nematode killing stew to that bed, I seem to have had less nematode trouble. We need a lab to test it!

Snakes are natural pest control
"Nathan's Pet Snails"
Wait! What's in the bag? A surprise?
Get Rid of Squirrels
Peak stupidity is when you can't kill vermin

The Blessing of Weeds and goodbye to being a Master Gardener

LOL looks like you're making yourself some awesome sauce! Keep us posted on whether it works . . .

Yes, let us know if it works, same problem here! I'm going to try Actinovate for nemotodes. Study for that is here > http://agrilife.org/today/2010/12/22/root-knot-nematode/. It's not as awesomely vile as your brew, but looks promising and more manageable for me to try.

Request – do you have any tips on how to kill red ants? They've invaded my garden!! 🙁

If by red ants, you mean fire ants… that's a tough one. I've never successfully eliminated them. Amdro works pretty well but I don't like it anywhere near my food crops. Flooding the beds occasionally will also chase them out.

Oh – and that stuff looks pretty good for nematodes. Let us know how it works, and I'll let you know how my NEMADEATH brew does.

Some ants will eat instant grits, which kills them by swelling their stomachs when moisture hits it. And some ants just ignore it. Worth a try though.

The permaculture solution would be to rent an anteater…

re: nematodes. good luck with your concoction! Most commercial growers will either solarize (with black plastic mulch) or use nematicides to keep their populations down. Better alternatives include nematode suppressing cover crops, like Sunn Hemp, or, better yet, rotate your beds with perennial grass, e.g.:
http://nfrec.ifas.ufl.edu/programs/sod_rotation.shtml

I just pulled cucumbers because of poor growth and little cucumbers, and found those knotty messes on the roots, but these are my 28 gallon pots that I was going to use for the winter garlic…(since we may move, and I don’t want to leave my Baker Creek garlic!) I haven’t any of the magical stuff that you have, but maybe the peppers and herbs, so I think it would be worth dumping the pots and using new dirt and old/new compost…I only need a helper for that! Getting old(er) is hard for gardening…thanks for your great articles and advice, may God bless you

Hi David, I came across what you wrote while researching nematode anatomy. Having not read anything else of yours, I can only assume from what I read here, that you prefer to garden without chemicals. So, I thought I might share with you that there are a variety of nematodes. Some, as you’ve experienced, are harmful to your plants and can decimate an entire crop, but there are also other nematodes that are great for your plants. Nematodes help contribute to nutrient cycling in your soil. There are even nematodes that will eat other nematodes. Those would fall under the category of predatory nematodes. There are also types of fungi that will also set up traps to catch nematodes. If it’s something you are interested in, you could check out the book Teaming with Microbes, or any of the books in that series. You might also be interested in checking out the Soil Food Web school. That is where I learned, am learning, about the amazing world that is happening right below our feet.
Happy gardening!