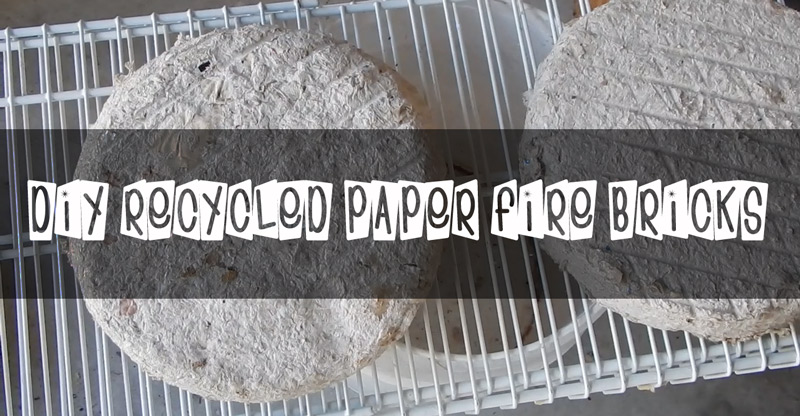 My friends Kim and Bill showed me how to make recycled paper fire bricks last week and graciously allowed me to film their process (though they didn’t want to be on film themselves).

You can make paper firebricks from just about any scrap paper. Kim and Bill don’t use any glossy paper in their paper fire bricks so they can later add the ashes to their gardens.

First, get yourself a stack of scrap paper. Newspapers, paper plates, napkins, cardboard, shredded paper from the office, $100 bills… whatever.

Then, take those and soak them in a bucket of water until they’re saturated. Bill and Kim recommend letting them sit for quite a while – even a few days – so the fibers can break down.

Once you have them all nice and soppy, shred them up with something. They use an edger blade attached to a drill. An industrial blender would likely work well, too.

Now it’s time to press your paper fire bricks. Any kind of multi-holed receptacle with a follower will work – Bill and Kim used a second bucket with lots of tiny holes drilled in it.

Throw in a good portion of shredded paper. Then press hard and get that water out as much as possible, then put the brick somewhere to dry. These paper fire bricks look very much like something I want to eat. Hard. To. Resist.

Once dried, they’re ready for use… then the ashes can be used to add calcium and alkalinity to the garden.

Consider it another form of composting.

Though I’ve yet to be convinced of the input of labor to output of fuel efficiency of this project, I greatly admire the ingenuity and the fact that paper is being kept out of the landfill.

Winter is on the way, so it’s a great time to experiment with possible fuel sources.

Today at the 326 Community Market: Watermelon Festival and $16 Fruit Trees!!!
Tools for Digging in Georgia Clay
How To Grow A Peach Tree From a Pit
Family Survival Gardening
Nearing the Post-Apocalyptic...
0 comment
PinterestWhatsappEmail