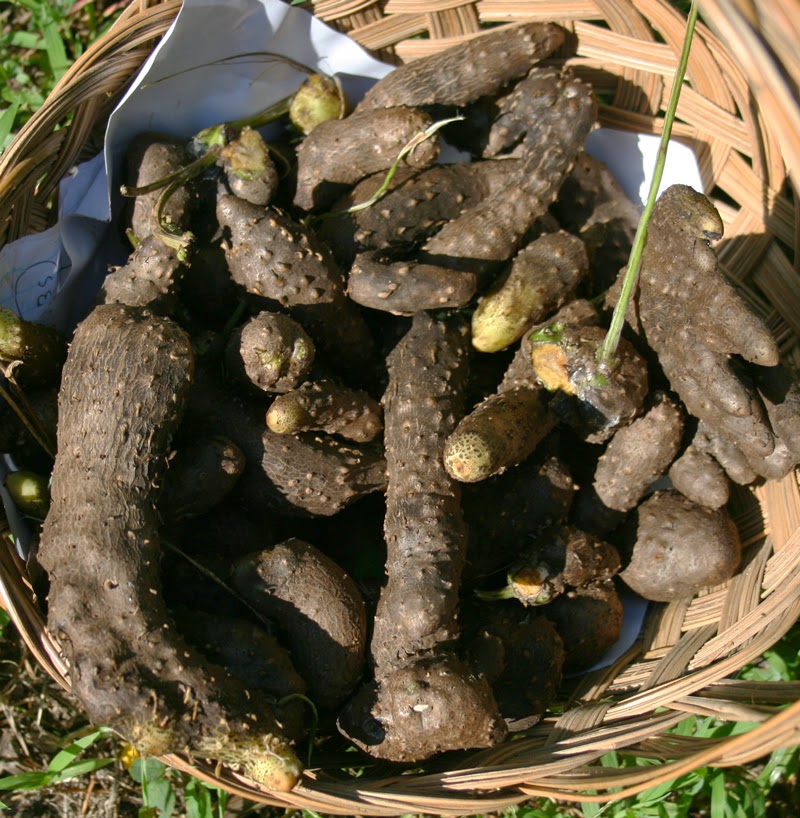 The edible air potato, or “winged yam,” does grow wild here and there in patches across Florida. Both the hanging “air potatoes” and the roots beneath the ground are edible.

The confusion over which ones are edible and which ones aren’t results from the fact that we have two main “air potatoes” growing wind in the state of Florida: one potential toxic and one that’s safe.

This is where Latin names really come in handy.

NOTE: You can find these guys on ebay – including the rare purple version – if you can’t find them in the wild!

The generally non-edible variety is Dioscorea bulbifera. (I say “generally non-edible” because there are in fact wonderfully productive and safe cultivars of D. bulbifera – you’ll just have a hard time finding them in the wild and consuming them safely without a laboratory)

There’s a different look to the leaves, but the dead giveaway is the bulbils that form in late summer and fall. D. alata bulbils look like this: So basically, if your bulbils are nice-looking, they’re probably the inedible type. You want dark, ugly things, not nice round asteroid-like bulbils.
My wish-I’d-met-her unknown gardening gal Helen Parkey was growing D. alata.
D. bulbifera doesn’t usually produce much in the way of underground tubers here in Florida… but D. alata can make awesome, delicious roots that are the perfect ingredient for the best hashbrowns and homefries ever. Rycamor and I found that yam growing beneath a large oak in a backyard.
Very tasty.
The edible air potato is propagated via cuttings and via planting the hanging bulbils in the fall. Overseas it’s a staple root crop. Here in the land of the free, however, this plant is on the invasive species list so it can’t be sold by nurseries… even though, somehow, ebay has it, as I mentioned earlier.
Fortunately, Dioscorea alata can be found growing wild at this time of year and the bulbils are easy to identify.
Here’s a video I did on the edible air potato you might also find helpful:
When you find an edible air potato growing in the wild, chase the vine down to the ground and start digging for free food – you’ll please your local chapter of the Florida Native Plant Society and your tastebuds at the same time.

Shop at Amazon and support The Survival Gardener!

"Land of the free"? But, you can't sell D. alata because it's an invasive food. Go figure. Maybe they'll change their minds when food prices are so high, people will need the "invasive" foods that grow wild : ) Enjoy yours!

Corn and wheat are way more invasive and are responsible for the destruction of natural land and peoples health.

When I google Dioscorea alata I keep pulling up a purple yam. Are the bulbils or root purple when you cut into them?

Good question. Some varieties, yes. Generally cultivated types. However, there are also while, yellow and pinkish types, along with those that have a bit of purple in them. I have grown multiple different types. I’ve never found a purple one in the wild, though.

wat about those with thorns inside? are they edible?

I’d like to send u ice and a video of some wild air potatoes I found in reddick Florida.

Sure – send me pictures. I am david@floridafoodforests.com

Also I cut into one and they r yellowish orangish and kinda slimy inside like a yam or yucca. Is this correct for the edible ones? They aren’t very pretty either! Lol. They r growing totally wild out here in Reddick. I love potatoes al kinds. I’m not fond of yams though. But yucca and any other potatoe I absolutely love. Please advise and send tips on how to cook them! Thanks

Yes, that’s right. Yellowish and slimy. The slime goes away when they are cooked.

Watch where you stepi! Age80+ and stepped on a largeone
Severe lumbar
Damage as i flew into theair
crashed herniating _L4_5
_

They are the perfect shape and size to make you slip! I hope you are okay.