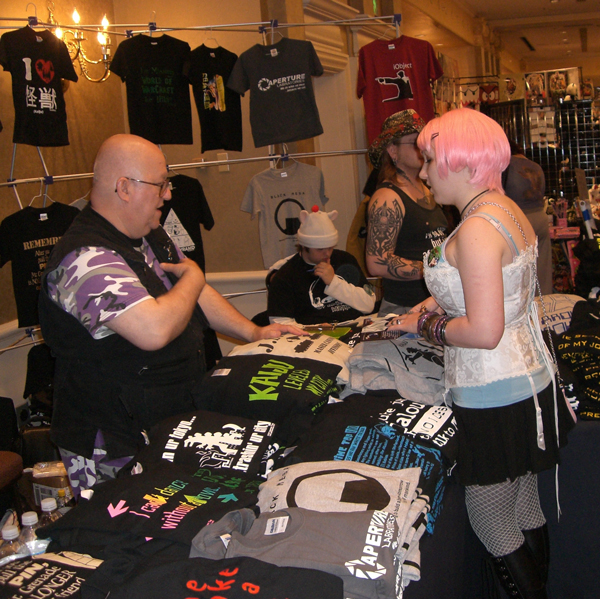 I just lost one of my best friends.

His heart stopped and he is now with his Lord.

His name was Weatherly. I think we’ve had our last baby, but if I had another son, Weatherly would be a good name for him.

We met online years ago because we were reading some of the same blogs and found each other’s sites online and would trade comments. We met in person for the first time around fifteen years ago when I was living in Tennessee. Weatherly was in Nashville working a convention, and I lived in Smyrna, about a half-hour out of town.

He wrote and asked me if I wanted to meet up for sushi.

I had no idea what to expect, and it was a little strange to meet a stranger off the internet, but I said yes.

Weatherly looked rather like Humpty Dumpty, short, with a bald head and a broad smile. We hit it off immediately and thus began a great friendship. He ran a screenprinting company, and I worked in radio as a writer, audio editor and producer. He had some ideas for ads, so we co-created a series of highly entertaining radio spots over the years.

They were just one-minute spots for the local market in his Alabama small town, but they were amazing. Weatherly had a madcap sense of humor and a voice you couldn’t miss. He was influenced by anime, old sci-fi shows with puppets, like Captain Scarlett, conspiracy and paranormal radio broadcasts, and campy old radio ads. His t-shirts were often hilarious and very esoteric in their humor.

Over the years, many of my children received custom onesies at their births, courtesy of Weatherly and his wife.

When someone on my youTube channel said we should print a “Compost Your Enemies” t-shirt, Weatherly did it, and it’s been a hit even since, with its campy font and terrible green color.

Weatherly came from a Church of Christ background and did not have the easiest life. There was pain in his past, but he pressed through and raised four children. He adored his wife. He was beloved of his friends. He was honest, caring, sweet, and had a laugh that was infectious. I only have one picture of him, and that is from a convention where he is wearing his purple camo and selling t-shirts to a girl with pink hair. He loved the outcasts and the odd people, which is maybe why he loved me.

He was like my brother, and in Christ, he is my true spiritual brother.

One year I traveled to a Godzilla convention in Chicago with him and we spent a weekend together selling t-shirts. That Sunday, we had to work the convention hall and were unable to attend church, so we prayed and shared communion together with crackers and wine in our hotel room. That is the hope we share, that we have a Savior who was not stopped by death.

I love you, brother. We will meet again. I can’t keep writing because of the tears. I miss you.

Welcome to the next level!
April Fools!
Herrick's "Minibeds-on-Plastic" Report on Sale
How to Grow Half Your Own Food - Free Viewing Today
Live in Ft. Lauderdale - Tomorrow!

A Busy Two Days: Updates from the Gardens

Weatherly was an awesome man. He will be missed by family and friends. I am honored to be able to claim that I am one of the fortunate who can call him friend.

Thank you David. I could not have asked for kinder words for my dad. He loved you all very much. It has been a difficult day and there are more ahead as we work through everything, but you are a true blessing and friend.

Love you, Ian. We’ll help however we can.

A wonderful memorial piece for a wonderful man. His loss is felt deep by so many of us.

What a wonderful man, he would have been a hoot to hang out with…and it’s very refreshing to see folks than can enjoy the fringe and fun side of life while still remaining an adult. I probably would have never met him, but just hearing about his life, his family, his faith and his friendships has made my life fuller.

When it’s my time to join my maker, I will make it a point to hunt him up. We can both view the great view of history and have a great laugh finding out what the truth was behind all those fun conspiracies.

My condolences for the loss of your friend.

I also had a moment of sadness for you when you said you’d likely had your last baby. I know, there’s always a last baby, but I’d have a dozen more if I could. It’s sad when that particular ride ends, so my condolences for that, too.

My heartfelt sympathy to you and Weatherly´s family and friends. People can change our lives in so many wonderful ways just by being a part of it. May God comfort you in your grief. Sending out love and prayers.