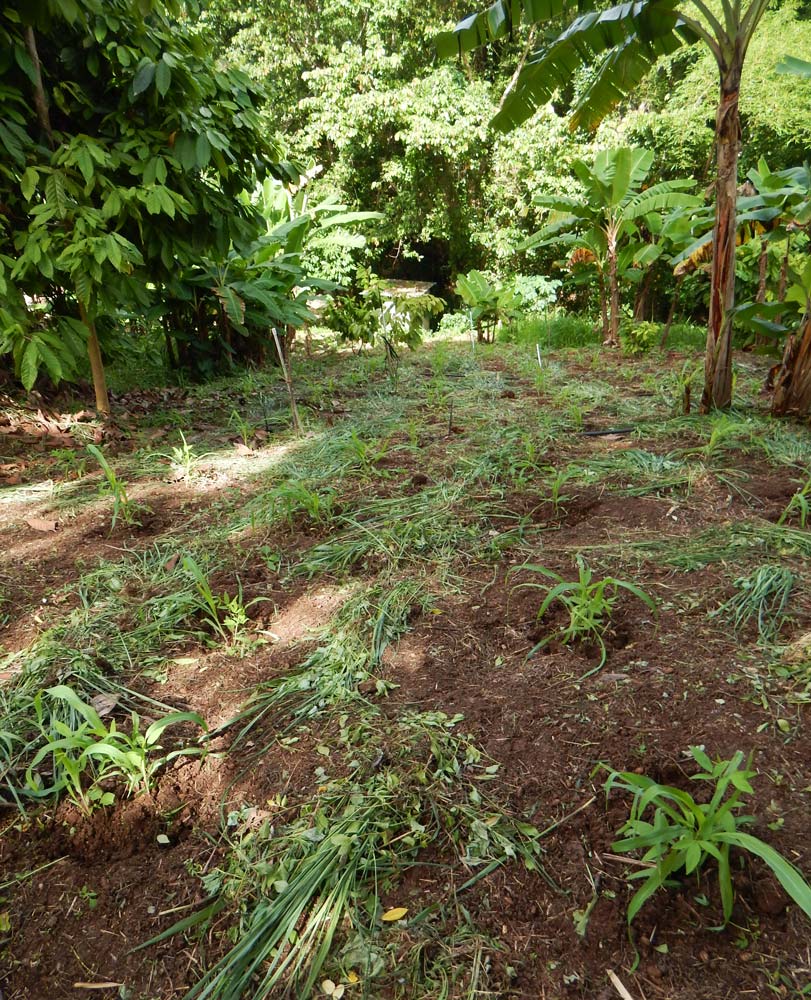 …then the rainy season kicked into full effect and the weeds went nuts! I’m sure I planted some in there somewhere.

I spent part of last week learning to weed like a native, crouching with a machete and trying to find where in the world all the corn and pigeon peas we planted went.

But… let me back up and tell you how we planted our intercropped corn and pigeon peas.

Since I’m new at gardening on a slope and new to growing in a truly tropical climate, I hired our farmhand – a local farmer who’s chock-full of agricultural knowledge – to show me how they plant corn here.

I told him I wanted to grow corn and later put in some pigeon peas somewhere on the hill as well.

He told me that the best way to grow them was to intercrop corn and pigeon peas.

Then he started clearing the weeds with his machete, rapidly mowing everything down to ground level.

After knocking the weeds flat, he started digging planting stations with a spading fork, twisting and loosening the soil and making a little ridge down slope from each pit.

I assisted with my trusty grub hoe, following the pattern he was creating.

After digging the pits, he recommended I toss 4 corn seeds and a couple of pigeon peas into each one. He then kicked the soil back over them, burying the corn and peas at a depth of 3-4″.

“Are those going to come up?” I asked.

Sure enough, they did.

Since I have a lot of my own ideas and knowledge, it was an interesting experience to simply assist a local farmer and do exactly what he recommended.

Back in Florida I would grow corn at 36″ width between rows, without intercropping, and space the corn at around 6-8″ between plants.

That’s not how they do it here. And they don’t bother tilling in between planting stations.

I created a diagram so you can get an idea how this works: Less than a week after planting, the corn and peas were already up. Thank God for warm, rich soil and a warm and moderate climate.

We probably planted about 1/10 acre of corn and pigeon peas.

The thinking behind planting both at the same time, so far as I understand it through the language barrier, is that the corn will bear first, followed by the pigeon peas later on. You can start chopping down the corn and then the entire plot becomes a patch of pigeon peas, bearing on and on for the next year or more. By planting both at the same time you’re only clearing and planting once.

He also told me that the corn, as they mature, will push outwards a bit and away from each other, finding the space they need to create good ears. They do indeed have plenty of space in all directions.

As you saw in the first picture, the ideal little pockets of corn and peas were rapidly consumed by the bush. That’s when it becomes necessary to chop the weeds down again and lay them in the rows, like so: I was told by my new farming sensei that after this first weeding the corn and peas will reach rapidly for the sky and start to overshadow the competition, requiring only one more good weeding before the corn is ready to harvest.

My farming friend also recommended that I buy some chemical fertilizer and put a handful in each planting station; however, at this point I decided to rely instead on my liquid fertilizer barrel system, as described in Compost Everything: The Good Guide to Extreme Composting. That stuff works like magic and has done very well on the corn I planted previously in the beds near the house. Why buy fertilizer when you can make it for free? This particular batch started with Leucana leaves, fish guts, urine and cow manure.

The mosquitoes got into that batch and started breeding, however, so I bought a little cheap vegetable oil to put a “skin” on top they couldn’t breathe through. Now their little larval corpses are feeding my corn.

I’m making another batch right now that’s heavy on moringa leaves, which ought to be very good for the garden and field crops.

Once you let it ferment for a couple of weeks, then you just dip out what you need with a watering can and water away. That’s what I did with the corn and peas right after we finished weeding them. They’re already looking nice. On Friday I went down there and filmed some of the machete work, plus give you all a look at the beds, including the additional cucumber bed we planted after the corn and pigeon pea plot.

If you remember from my book Grow or Die: The Good Guide to Survival Gardening, grain corn is the only grain that makes my go-to list as a survival crop.

There are multiple reasons for that, but in short: grain corn is easy to grow, stores for a long time, is much easier to clean and process than other grains, plus you can make grits and corn bread from it.

Adding in pigeon peas makes a lot of sense if you’re in a climate where they grow well.

In our old location we’d usually get a frost just as the pigeon peas started to produce, destroying all the pods. I gave up on them after a few years of failure. Down here – and in zone 9/10 USA – they make a lot more sense. Pigeon peas are actually a small perennial tree and fix nitrogen while making food and good fuel for a biomass cook stove.

I’m looking forward to harvesting corn and then peas… and I’m really enjoying learning new ways to farm. Interplanting corn and pigeon peas isn’t something I considered doing before. Sure, I’ve interplanted corn with beans and squash, but putting a big plant like a pigeon pea in the same hole with a big plant like corn? No, never tried it!

No matter how good you get at something, there’s always something new to learn.

The forums have been repaired and upgraded via some nice, expensive, amazing software. Go sign up here.

Hey, what happened to the forum. I’m not listed there under members.

Oh wait, I just read your Email. So sorry.

Naw, don’t be sorry. It was my fault. My IT guy and I had to torch the whole thing, pictures and all, to get started on the vBulletin version. Getting it all done right took money and some time. Please jump back in and share photos, etc. I’m keeping this format and won’t trash everything again.

I imagine the pigeon pea will fix nitrogen in the soil, for the corn, as it grows. Which is wise when gravity will take all your nutrients down hill, along with any decent rain.

I love growing pigeon peas, in our part of Australia. Our chickens love pigeon peas too. I swear its the only reason they’ll keep laying eggs for me, and moult very quickly. Its the high protein content of the peas.

My back hurt just watching you weed like that…

In Puerto Rico mi grandma use to plant in the same hole at the same timeof planting bush beans sweet corn and pigeon peas. Both the bean and the pea will benefit the corn by fixing the nitrogen in the soil. Plus she fertilize one time only.
1. First to harvest was the beans. Feeding the plants and husk to the goats.
2. Second came the corn. Also feeding the leftovers to the goats and pigs.
3. Last one the pigeon pea. She will do 2 harvest one for green peas and last one for dry peas. Wich she store in old one gallon milk only for later use that will last for a year. Then feeding the pigeon pea bushes to the goats.
This is like the 3 sisters system that the american indian use to do. The difference is they used pole beans, corn and squash.
With the squash you dont have to weed.
Find your 3 sister’s combinations where one plant will benefit from the others.

Thanks you, Luis – great input. I like the beans, peas and corn idea. One more crop stacked into the space. We’re getting close to harvesting some of our peas. I like your grandmother’s method. Green, then dry.

Thanks, i am glad to share the knowledge of my grandma. Every time i plant i remember her and my Dad .
Thanks again and enjoy those pigeon peas.