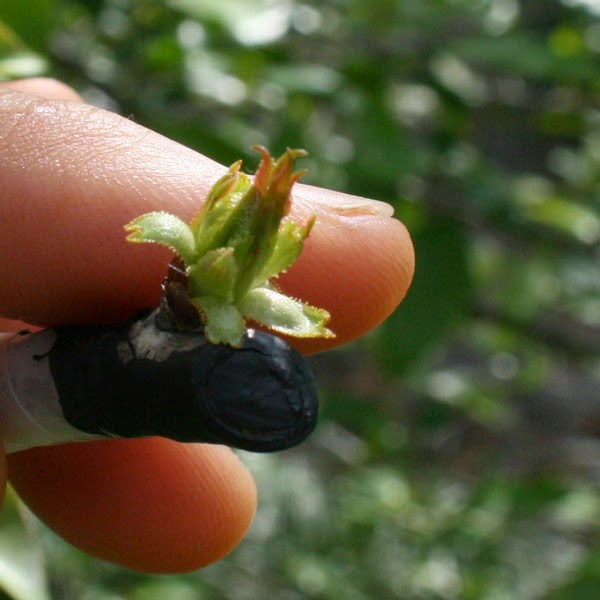 A question came up about a double-grafted tree in a recent goodstream and Benjamin sent me some thoughts:

“I’m not a Youtube commenting sort of person, but I overheard a question about an apple tree with two grafts. I think he was referring to an Interstem tree. Incidentally, that very thing passed into my life three weeks ago when I was visiting a local orchard to take fruit tree cuttings. Along the way, the owner stopped to show me last year’s planting of trees. They were all Premier Honeycrisp trees (a recent sport of Honeycrisp that ripens 20 days earlier), but the most fascinating part was that the trunk changed color where the rootstock met the interstem graft, and then changed again to the final variety. I don’t know what type of graft was used, but the trunk was exceptionally uniform (straight and no bulge at the grafts) and made me think of a hardwood carpentry product rather than a grafted tree.

The owner told me that the purpose was to have a strong root system for stability and nutrients, but limit the growth vigor. And then we talked about Premier Honeycrisp, because another local orchard sells them for $120/bushel.”

Benjamin sent me a link to this article from PennState, which talks more about the practice of interstem grafting:

“Following World War II, due to increasing labor costs there was renewed commercial interest in smaller trees and the use of interstems to produce hardy, precocious, semi-dwarf trees in America. In general, trees with dwarf interstems were smaller and more precocious than trees on seedling roots, but to a lesser extent than trees on dwarfing rootstocks. The degree of dwarfing increased as the length of the interstem increased regardless of the vigor of the rootstock. In Michigan, Carlson reported that the size of 12 year-old ‘Delicious’ and ‘Jonathan’ trees decreased as the length of M.8 interstem on Alnarp 2 rootstock increased from 4 to 10″. Yield per tree declined linearly with increasing interstem length, but 4 and 8″ long interstem trees had higher yields than trees on Alnarp 2. Yield estimates, based on tree spacing adjusted for canopy diameter of the 12-year-old trees, showed that yield per acre increased as interstem length increased. Researchers in Oregon placed interstems of varying lengths at 3 or 12″ above ground and found that the lower placement had a greater effect on scion growth, but they found that increased flowering was not closely related to growth suppression.”

I didn’t realize that grafting in just a portion of a dwarfing rootstock stem made a difference. I had thought it only kept trees smaller if the entire rootstock was dwarfing. There are other reasons for interstem grafting as well, such as creating compatibility between incompatible tree varieties via inserting a section of stem compatible with both:

“Quince is sometimes used as a dwarfing rootstock for pear, but only certain pear cultivars are directly compatible with quince. For example the pear cultivars Old Home, Anjou, Comice, Hardy, Gorham, Flemish Beauty and others are all compatible with quince, but the cultivars Bartlett, Bosc, Seckel, Winter Nelis, and others are not (Westwood, 1993). The incompatibility between Bartlett and other pear scions listed above, and quince stock, depends on direct contact between the two. Hence the insertion of a mutually compatible interstock between the two can result in a functional tree. For example, insertion of an Old Home interstock between the Bartlett scion and the quince rootstock is used to overcome the otherwise incompatible Bartlett / quince combination. Research on this system (Gur, et.al. 1968) has resulted in one of the better-understood examples of (one of) the physiological mechanisms of graft incompatibility.”

It’s a fascinating world, isn’t it?

Birdhouses and nectarine grafts
Juan is a Grafting Ubermensch
Taking the top off a tree and changing the variety through grafting
Free Plants for Everyone: The Good Guide to Plant Propagation!
Grafting in the Tropics
0 comment
PinterestWhatsappEmail

From One Variety to Twenty-One: Apple Grafting with...

Grafting an Apple Tree to Make it a...