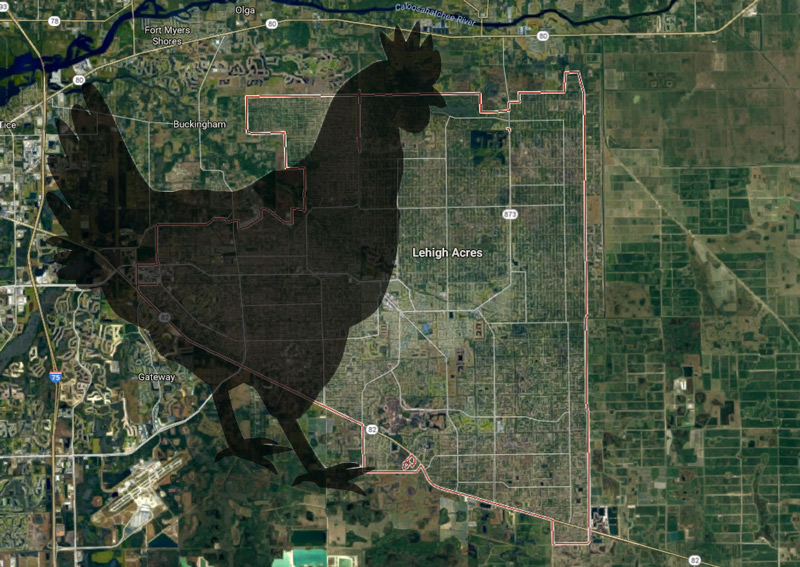 “I came here because I didn’t want to live in a HOA (homeowners association) community, you come out here because you want people to leave you alone,” said resident Teresa Park.  “I have a half acre, I’ve never owned chickens because I’ve watched my friends get busted.”

Another homeowner with backyard chickens in LeHigh Acres was told to get rid of his birds back in May:

Charles Edwards has two options: get rid of his seven chickens or pay $250 each day in fines.

“I think I should have the right to do as I please on my own property, especially if I’m not harming anybody,” said Edwards. “I want them happy. These are my pets.”

He built the chicken coop himself.

His seven chickens together produce about a dozen eggs each day. He doesn’t sell them. He says he shares them with his neighbors.

“These eggs are fantastic compared to store-bought eggs,” said Edwards.

He may soon have no choice but to go back to the grocery store because he’s violating Lee County’s code.

A dozen eggs a day from seven chickens is… epic, and unlikely; however, that’s beside the point.

The levels of government now in play in much of the US have made home food production much more difficult than it should be. County restrictions on chickens are just a symptom of a greater societal sickness where private property and individual rights are trampled for a collectivist “greater good” that usually ends up only benefiting a small portion of the population while restricting everyone else.

I laughed at one comment below this article from Jane, a disgruntled LeHigh Acres resident:

“I think it is absolutely ridiculous that we have to petition to have chickens to feed ourselves on our own property, but they (commissioners) can spend $500,000 to put a traffic circle in on Beth Stacy Blvd, and Frank Mann told me at the “meeting” for the circle that and I quote, “half a million dollars, that’s nothing honey!” Not only was I offended he called a constituent “honey” but that he thought spending half a million dollars was chump change. Having laying hens in our backyards, doesn’t cost them anything, but loss revenue when they fines those of us that have them illegally! I call BS Frank Mann, vote him out, his time has come!”

Frank Mann, chairman of the board of county commissioners, is the guy who stated:

“If you can get a groundswell here that really demonstrates strong community support, and you’re a community of 85,000 to 100,000 people, that would be a jumping-off point to approach the county commissioners.”

Nice. That would “be a jumping-off point to approach the county commissioners.”

I helped with a chicken battle in Smyrna, Tennessee (may the town be buried in ashes and forgotten to time).

The town council was completely uninterested in anything that would rock the boat or expand freedom. They were enjoying their fiefdom and real estate deals and viewed our requests with contempt. I could tell you some stories…

I wish the residents of LeHigh Acres the very best in their requests. Even being left alone by code enforcement would be a good start. It’s going to be a long fight, though, unless they can get the ear of someone willing to allow chicken owners to live and let live.

My two cents: run for office, folks. Get in. Then dismantle all the county power you can.

My Sweet Potatoes are Wilting and have Yellow Leaves!

I Have to Kill It

We have no chicken by-law for properties less than 3 acres BUT racing pigeons are allowed anywhere! In LeHigh Acres, I say register all birds with the local pigeon club and act baffled when they don’t win any races…