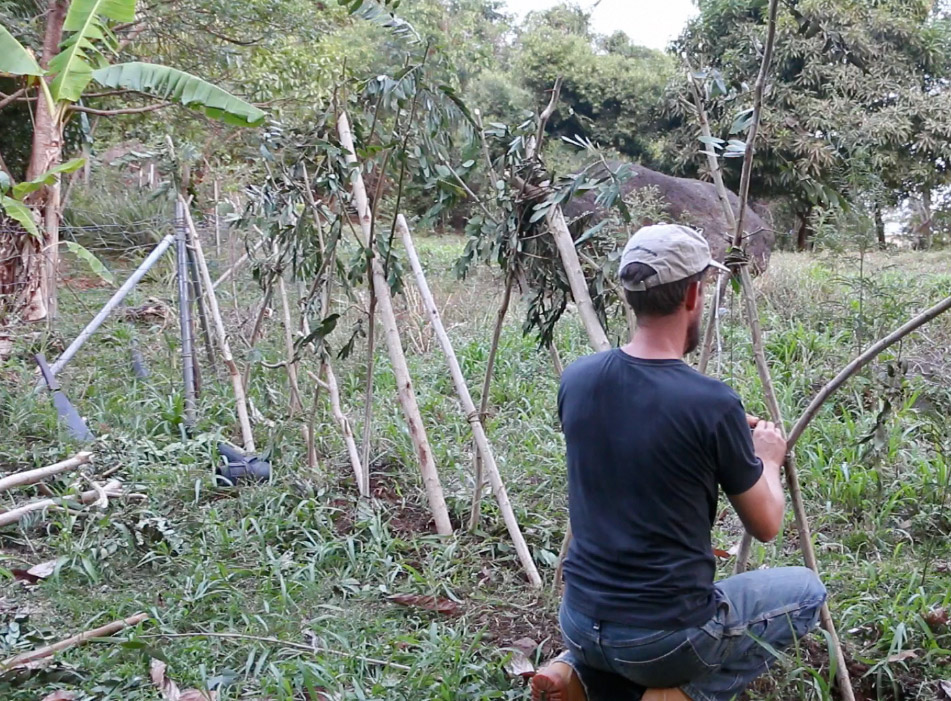 Since we purchased our new land in the tropics, I’ve been hunting for good living fence ideas.

The importance of barriers was driven home yet again when I went over to the land with Rachel last week, intending to put in a bed of tomato transplants for a video project I’ve been working on.

The soil was nice and loose, the sun was warm, and I got out my broadfork to start loosening the soil…

…and then we suddenly had company. A lot of company.

About ten sheep showed up from nowhere and decided to watch me plant.

They were just waiting for me to plant – and leave – and then they would help themselves.

Frustrated, I quit digging the bed and decided to light fire ant hills on fire instead.

Then I took my tomato transplants home and planted them in one of my landlady’s garden beds.

Without fences or hedges, your gardens fall prey to whatever herbivore decides to wander through. In North America, you’re likely to have your plants eaten by deer. In Central America, roaming goats, sheep and cattle are usually the culprits.

We’ve also had plenty of issues with dogs digging into the compost and even digging up buried food scraps that were intended to feed plants. I can’t blame them, since most of the dogs here are half-starved, but I’m not running a charity. I’m growing gardens.

I have asked friends and acquaintances about various cheap fencing options. As much as I’d like a fence like this: …I am not rich, and there are 740 linear feet to fence. Lumber is almost twice as expensive here as in the USA, so getting a proper wood fence put in is a non-starter. The tropics are also very good at breaking down wood, even pressure treated wood.

A longer-lived and less expensive option is chainlink fencing: Still, a local builder told me I’ve probably be looking at about $15,000 USD to put in a chainlink.

As enjoyable as it would be to live inside the confines of industrial steel fencing, we’ll have to pass for now.

The least expensive option seems to be a hedge or “living fence.” The trick will be getting it established fast before the goats and sheep find it. I have been told that people tie up their animals as soon as the rainy season starts and the farmers start planting, so it looks like I’ll have my window starting soon.

I’ll start with something like this, using Gliricidia sepium: I will also go with some edible hedges, I am sure. The problem is, they need to keep all the animals out.

I was thinking about using some Gliricidia for posts, then weaving bamboo in between them to provide a barrier. That would probably last a couple of years before rotting out.

There are actually quite a few excellent plants that can be used to make living fence posts, as this post from ECHO demonstrates.

That’s one to bookmark, as it also gives a great overview of the living fenceshares a lot of living fence ideas along with the additional benefits you can get from planting one.

The leaves of many living fence species, such as those of moringa, gumbo limbo and erythrina are nutritious forage for small animals. The suitability of leaves as feed varies not only from species to species but also with age. When living fence posts are used to produce forage, space is conserved on the farm.

Leaves, flowers, fruits and seeds of many living fence species are important for human consumption. Examples such as the flowers of izote or moringa, fruit of cactus, mombin or mulberry, leaves and roots of cassava and seeds of annatto and cashew are useful in producing food for family use and for market.

A few living fence plants, such as the sisal plant and some bamboo species yield branches or leaves that can be processed into useful fiber for cloth or rope, or used directly for tying.

Many living fence posts can grow to become shade trees. Trees such as Inga, Erythrina and Ficus species provide welcome relief from the hot sun for people and livestock.

Many trees are harvested for their wood. Although the farmer wouldn’t be expected to cut down his fence to market the timber, branches from such species as willow can be used for making home craftwork such as woven baskets and carvings.

Some living fence plant species are also used in medicinal preparations. Jatropha produces a medicinal oil in the seeds, and gliricidia produces rotenone in the bark which makes an effective rat poison.

In some areas windbreaks are necessary to protect against the drying and lodging action of winds which can prohibit the growth of crops.

I have spoken before on the potential food value of a living fence/hedge/fedge:

I still love this idea and plan to work with edibles, but the main reason I need one is to affordably keep out livestock, hence my ongoing collecting of living fence ideas. It needs to happen soon, and when I start planting I will make a video so you all can see what I’m doing.

I’ll start as soon as the rains start falling regularly.

Because those sheep ain’t getting my tomatoes.

That’s pretty awesome, but the shipping would kill me.

What about barbed wire? I have seen plenty of that in central america. They stick those living posts in the ground and attach the wire to them. eventually the posts grow and you have a permanent structure. That should keep out cattle and sheep but I’m sure dogs would figure out how dig under. “Make Dave’s land great again” “Build the (living) wall”

It would definitely be a good start.

passion fruit vines 🙂 which leads me to a question. i have a passion fruit vine at home and recently learned that in order to get fruit, the flowers need to be pollinated by a “compatible plant”…not so much from the same plant. Would taking a cutting and propagating that be considered a compatible plant even though it would essentially be a clone?

for what it’s worth…that thing grows like crazy and i think my neighbor is mad at me because it’s crossing over to his side. I need to cut it back some soon.