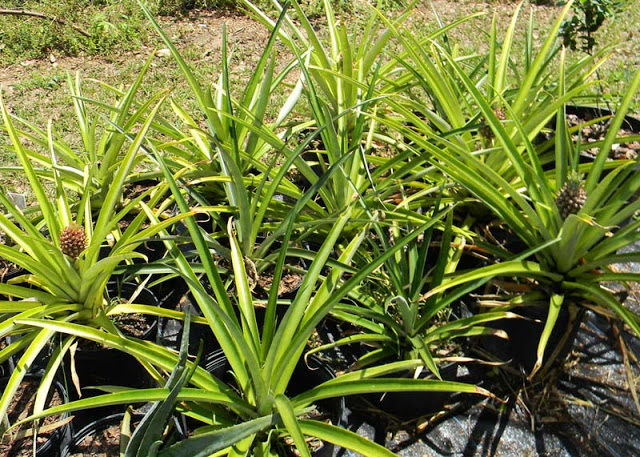 Growing pineapples outside the tropics isn’t only possible… it’s actually pretty easy. Did you know you can grow pineapples up north and just about anywhere with a little bit of work? Here’s my latest post for Mother Earth News:

“Down in South Florida (and Hawaii), gardeners have all the luck. Roughly 1.5 zillion amazing tropical species grow there, including pineapples. I used to cut the tops off and plant them here and there around my landscaping. In North Florida, where I now live, it’s not nearly that easy.

You’ll do great until the temperatures drop into the 20s, then your pineapple plants melt. The cold is insurmountable here. You may do good for a few years … then BAM! Dead bromeliads.

Fortunately, they’re easy to grow in pots. The picture in this post shows one of the many pineapple plants I inherited from my grandfather when he passed away a couple years back.

Before I go further, I have to tell you about him. His name was Judson Greene and he was a sailor and a brilliant carpenter. When I was a kid, he stood ten foot tall. If you dropped him on a desert island, he could build a sloop from laminated twigs, find a way to varnish it (twice), then sail back to home port before dinner. He had traveled about the tropics in the Navy, done scientific research, and still managed to raise five children, the oldest of whom was my mother.

Grandpa was also an inveterate experimenter, which is perhaps where I get my own exploratory drive. He planted a rubber tree in his back yard, grew a mahogany in the side yard, and was always toying with the idea of converting his whole house to solar power.

When he discovered in his 70s that you could grow pineapple plants from the tops of store-bought pineapples, he hatched an idea. Visiting the local grocery store, he asked the woman behind the food prep counter what she did with the pineapple tops that were removed when they made fruit salads. When he found out they were being thrown away, he asked if she’d save him some. She did – an entire black trash bag full.

Grandpa called my younger sisters and their friends together and made them an offer: for each pineapple top they planted in his back yard, he’d pay them a nickel.

Pineapple plants were soon scattered here and there all through the backyard landscaping. About two years later, the bounty started trickling in, and wow – those pineapples were the most delicious golden fruits. The ones the coons didn’t steal were shared regularly with visitors, who were all amazed to realize they were homegrown. For the next decade, until his death, Grandpa had pineapples … and his army of young planters grew up enjoying the fruit.

Though you may not live in the right climate to grow pineapples unprotected, they’re remarkably easy to grow – even outside the tropics.

When I inherited as many of Grandpa’s as I cared to dig up, I took them up here, potted some and planted others up against the south wall of my house. I now have at least five blooming, both in pots and against the wall … and the frosts have only claimed a few test starts I put out in the yard.

The key to growing pineapples is two-fold.

That’s the basic formula. You can plant pineapple tops in cheap potting soil and water them as you remember… and they’ll grow. Pineapples, like all the bromeliads I’ve ever handled, have limited root systems. They feed primarily through their leaves.”

I’m a big fan of zone-pushing, as I’ve written before. Pineapples are one of the easiest plants to do this with – much easier than key limes or papayas. They’re tolerant of abuse, can be grown in small pots – and they taste a lot better when you grow them yourself. Go buy a pineapple. Eat it. Plant the top. Enjoy the awesome. A 60′ Row of Jerusalem Artichokes

Hi, I also grow my own pineapples in Zone 10, FL, and completely agree that the taste is just so superior to those in the grocery store!

Thanks for stopping by.

Hi David,
I have “unintentionally” grown pineapple plants in my compost pile in my Orlando yard. I just threw the tops of grocery store pineapples on my compost pile and they rooted and produced fruit. I eventually had to relocate them to another part of the yard due to house construction. I just dug them up and placed them on top of the grass in their new location. No planting at all! They rooted right where I lay them and kept going strong. I have harvested many pineapples over the years. Recently, I moved the whole patch again by digging them up and placing them on a freshly weeded patch of Florida sand. I’m sure they will be fine. They are hardy plants and spread as they send out new growth after fruiting. I had to downsize the patch and gave away 9 plants to friends. I love plants that thrive on neglect!

Yes – it’s great to have plants like that. As long as they don’t freeze, they’re really simple. Love those compost pile volunteers!

"I use heavily diluted urine, compost, a little dissolved Epsom salts and fish emulsion every once in a while … but they probably don’t even need that."

Ha! proof that you're into pee-ponics! 🙂

I have three pineapples. This winter I lost nothing to the chill demons, but my pear tree only made 5 flowers so we won't have any pears this year. Pineapple are less cold tolerant than my neoregelia's and the other pineapple bromeliad (species unknown) that i enjoy. I find the thicker leaved, spikier broms can take more abuse than the thin leaved, namby pamby nursery-borne bromeliads. pineapples can take a lot of abuse but cant take the cold at all. good article!

I know what you mean about the pears. I got ZERO blooms on my oldest pear tree this year. But the tropical stuff is doing better than it did last year.

I think that's why it's good to grow a ton of stuff… from tropical to temperate. No matter what the year looks like, something will do okay.