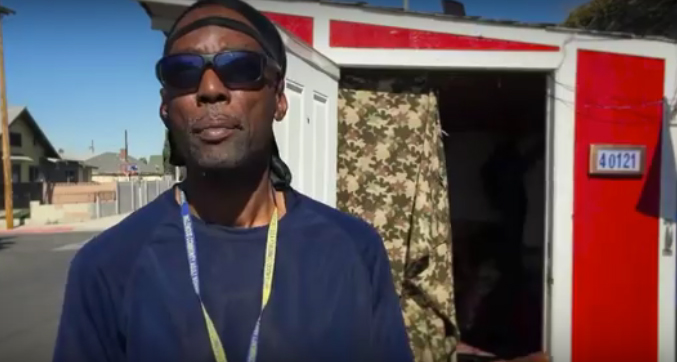 This is a sad tale of tiny houses and uncaring bureaucrats.

Watching the video and listening to the city officials congratulate themselves over a billion-dollar-plus homeless plan that stretches on and on into the future, compared to a Good Samaritan who raised 100k and did something right away… ouch.

It’s a tough issue and I get where the property owners are coming from, but at the same time, one of these little houses is a huge upgrade compared to living under a tarp.

At least Elvis Summers is doing something for his down and out neighbors.

When the city of Los Angeles refused to address an epidemic of homelessness — seen in sprawling and dangerous tent cities — a struggling musician answered the call and built dozens of solar-powered tiny houses to give those down on their luck a place to call home.

Elvis Summers crowdfunded tiny homes in part through his nonprofit, Starting Human, and raised over $100,000 for what he viewed as a decent, if temporary, solution. And with the help of volunteers in the contracting and construction business, built some 40 tiny homes of wood with steel-reinforced, locking doors to provide solid shelter for struggling tent-city residents.

Summers, who experienced houselessness in his 20s, viewed the little, self-sufficient houses as a creative solution to L.A.’s colossal homeless issue — particularly as the wooden structures provided a solid home base for those seeking jobs or drug and alcohol treatment.

Summers’ project went swimmingly — individuals who’d survived in flimsy tents with little to no security felt the dignity of a structure to call home base.

That is, until the city of Los Angeles put its foot down, kicked several tiny home residents, out, and transported the structures for demolition.

“About my house, you know, you know I had a peace of mind,” Willie Hadnot told NPR shortly after losing his home. “I could shut the door, go lay down, quiet. And that’s what I miss a whole lot, man. I don’t want to start crying.”

Suddenly evicted tiny house residents weren’t permitted to retrieve their few belongings — including medications — before police and garbage trucks hauled the homes away.

Summers managed to pack up a few of the tiny homes on public property, but was forced to evict residents, himself — simply in hopes of saving the structures from the city.

City Council had met to address L.A.’s notorious homeless issue, and councilmembers and local residents expressed outrage over the tiny homes they deemed eyesores and mere bandaids for the greater problem.

“When the city took those three houses, they chose to do it at the exact same time that the council and the mayor were at City Hall unveiling the mayor’s new homeless $1.27 billion plan,” Summers explained.

That plan seeks to create permanent transitioning housing for the homeless, among other programs, but does not immediately address the city’s crisis.

Summers’ tiny houses — which cost around $1,200 to produce — have a wood frame and shell, include a solar power system, a camping toilet, two windows with alarms, and, most importantly for residents, a steel door with deadbolt

— are indeed temporary, but offer a roof, walls, and relative security in the interim.

Living in tents provides neither security or dignity and can make procuring a job or beating an addiction a seeming impossibility. These tiny houses constituted a jumping off point — a sturdy base — for residents to rely on.

You can sh!t on the streets of San Fran legally but can’t give homes to the homeless.