Home CropsCucumbers What Is This Mysterious Cucumber Plant?
CucumbersPlant ID 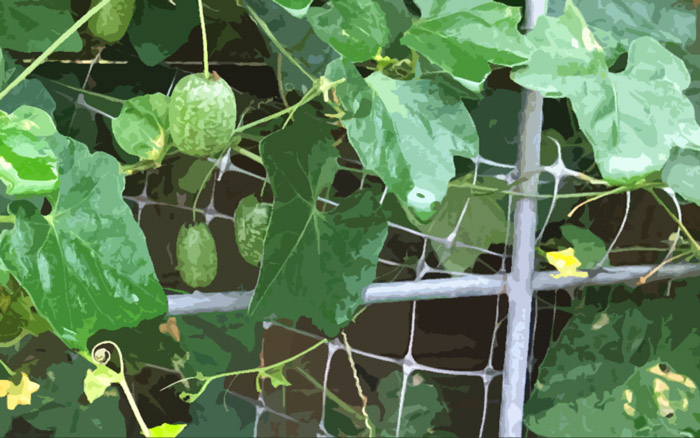 JP writes to ask about a strange cucumber plant that appeared in her garden:

“Do you happen to know this plant? I originally thought it was Coccinia grandis, the ivy gourd, also known as scarlet gourd, tindora, but the flower is much smaller and yellow.” I admit, this one stumped me at the onset. At first I thought it was Melothria pendula, which is an occasional find in Florida (and is a good little edible), yet the fruit were too big to match any creeping cucumber I’ve ever seen.

You can see Melothria pendula in this video, starting at 3:19:

JP is right about the blooms disqualifying it as a Coccinea grandis.

The leaves look the same but the flowers are wrong. Plus, the fruit on C. grandis aren’t mottled like the ones in the picture. A little more searching and I was able to nail it down as the “cucamelon” (Melothria scabra), which is a cucumber usually planted as a novelty by creative gardeners. It’s in the same genus as the creeping cucumber, so its very close appearance makes good sense.

“Cucamelons are tiny, grape-sized fruits that taste like cucumbers, but with a touch of tart sourness. They look like miniature watermelons and are also known as Mexican sour gherkins, or Melothria scabra. You may also know them by their other nicknames: mouse melons, Mexican miniature watermelons, Mexican sour cucumbers, or pepquinos. Cucamelons are native to Mexico and Central America.”

It’s a pretty little fruit and a good edible, though who knows how it ended up in JP’s garden!

Now I want to grow some.

Groundnut plant - or not?
Pictures from the Springer Mountain Approach Trail
POP QUIZ: What IS this thing?
Eating Death Apples in Paradise
A Wild Solanaceae - Anyone Have an ID?
7 comments
PinterestWhatsappEmail

A Wild Solanaceae – Anyone Have an ID?

I’ve grown Melothria scabra many times and the peduncle is usually much shorter than the picture. The fruit’s stem length is variable. It’s a Melothria alright, but the way to tell is by mature fruit, both mentioned species have small fruit. M. pendula fruit will eventually turn very dark, whereas M. scabra fruits get more pale as they ripen. M. scabra is also more commonly known as Mexican Sour Gherkin or “Sandita” in Mexico, farther south. M. scabra is fairly productive, but tedious to pick. They make fine pickles as long as the recipe does not use much sugar. For some reason, sugar often causes shriveling in the pickles.

The plot thickens! I will ask her for some follow-up photos.

I’ll bet the sugar in the pickle brine is pulling the water out of them. Might be an osmosis thing.

Agreed, about the osmotic pressure. Eventually, it’ll even out, but after the damage is done. Fermenting Melothria is an unknown, as yet. Still, I’m glad National Pickling cukes were used in this year’s lactic ferments, much easier to pick and the results were excellent. 18 pounds of cucumbers=many, many hours of picking Melothria!
The shriveling was discovered by a chef, for whom I picked gallons of M. scabra. I had made vinegar-based pickles without sugar and they came out fine. The chef wanted a sweeter, bread and butter style and showed me the results.

Might be the thin skins. Or the higher level dissolved. Never tried to make anything but lacto-fermented cucumbers. Had great luck with Coccinea grandis.

https://www.foragingtexas.com/2008/10/creeping-cucumber.html
I am not sure if this is the same plant, but I do have the fruit in the link growing on my property in south central Texas. Hopefully this information will help.
I can confirm these are tasty, but do to the warning from Dr. Merriwether I do not eat them even if they start turning dark green.

Now that is a cool little plant.

Hi David!
After your ‘gardening talk’ at the Riverland Preserve yesterday (1/2/2021), I was excited to obtain several plants/seeds of Creeping/Guadeloupe cucumber, Melothrina pendula from Naomi who was also in attendance. I was originally introduced to this edible native on a foraging walk with Deane Jordan (aka Green Deane of Eat the Weeds) in June of 2020 at the George LeStrange Preserve in Ft. Pierce, FL where it was growing on in fence. I could not find it available through any local nurseries or plant buddies so I am blessed to finally get some!
PS Hope you & Rachel had a wonderful anniversary!