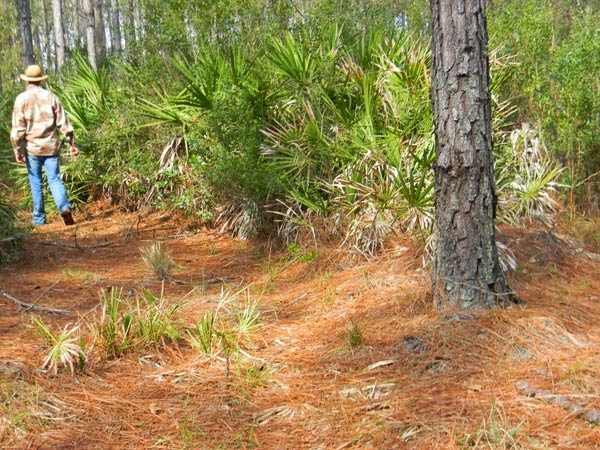 Just over a week ago we went camping with some friends.

The idea was to hunt hogs – which failed. (There’s a hilarious story in there, though, involving a rifle with a tricky safety and a close encounter with chupacabra – ask me about it sometime.) What didn’t fail, however, was my hunt for edible plants on what used to be a pine plantation.

Since the land had been cropped many times with pines, then clear cut, the species diversity was poor. Parts were swampy and parts were sandy. Overall, the soil was mostly pretty moist – and wild blueberries were everywhere, undeterred by the land’s monoculture past. Those tiny little red, orange, yellow and green leaves belong to the sweetest little wild fruit in all of Florida: Vaccinum myrsinites, also known as the shiny blueberry. Once you’ve spotted one of these for yourself, you’ll see them everywhere – provided you’re hiking around in pine scrub. There are often many dozens or even hundreds of them growing in colonies under the right conditions.
The blueberries are tiny but have an incredible flavor that has to be tasted to be believed.
Unfortunately, all I was doing on this particular hike was scoping out the native populations for future harvesting – there won’t be blueberries ready until a few months later in the year.
Another species that was scattered here and there through the scrub was another native Florida blueberry, the wild rabbiteye blueberry (Vaccinium ashei), a taller plant with much larger leaves than the diminutive V. myrsinites. That shrub may not look like much but it makes some very nice fruit and takes basically no work to grow in your landscaping.

In fact, I have about a dozen or so in my nursery that are loaded with young fruit. I’m more than half tempted to just plant them all in my yard rather than sell them…

If you’re hoping to spot native Florida blueberries it’s pretty easy to do at this time of year thanks to their distinctive blooms. They look like little bells and contrast quite nicely with bandaids and dirty thumbnails.

(I totally cut myself with a machete. So there. What did you do with YOUR weekend? Bet it didn’t involve chopping bits of wood up for a rocket stove with a giant sharp blade, then missing and slicing into your finger. That sort of experience makes life worth living. And helps fund Johnson & Johnson.)

Wild blueberries are all over the place once you know how to look.

If you see pines, start looking.

If you see pines and palmettos, you’re definitely on the right track.

There are some look-a-likes, but they don’t set berries. Our native blueberries have cousins that only make dry seed capsules… so if you notice the characteristic bell-shaped flowers and they aren’t later followed by berries, you’ve likely found one of blueberry’s underachieving relatives.

Get out there and go hunting!

amazing that you can find them out in the wild like that..I have 4 planted at my house right now and they're doing really well. Still waiting for my first crop of fruit from them..that is if the birds don't get to it first..

Excellent. They'll do well for you. The bird usually don't steal all of mine.

David, I missed talking to you last weekend-you seemed to be swamped with fans/customers!
Your lovely sister did sell me a RajaPuri though.
I would like another RajaPuri and one of your wild Rabbiteyes,
Any chance you will have them to Kanapaha?

My sister is the bomb. Glad you got one Raja Puri – I'm out of good-looking ones now but I might have another I can find. You should plant two rabbiteyes for pollination. I may not have them at Kanapaha – still sorting out stock. Say hi this weekend and let me know you're myamuhnative.

When I was a youngin' my grandmother and I would go hunting these up in the woods out here in my area of Florida (Sumter County). Good memories. 🙂

While digging up some wild azaleas on some cut over timber land, I found a blueberry, probably a rabbiteye, growing right with one of the azaleas. They're all getting used to a new home.
What are your hours on Thursday in Ocala?

I thought u were crazy. While planting trees, I looked down- blueberries! I have lived here 8 yrs, never did I think I had blueberries. Amazing!!!

I am crazy; however, spotting blueberries is a hobby when I'm not playing my violin on the roof.

Glad to hear you found some – totally exciting. Wait until you taste them.

Hey David. Funny how many times I may have been on your site and not even known it was you. I was googling for my little wild blueberries, and here you are telling me exactly what I wanted to hear. Thanks. We have shiny blues on our property in Hawthorn. I try to leave a few for the birds, lol.

Reply
Carving Out a Florida Food Forest From the Palmettos: Possible? - The Survival Gardener October 31, 2016 - 8:27 am

[…] have led foraging walks in scrubby areas and in pine flatwoods. The best wild edibles are blueberries and their edible berry relatives, along with occasional native passionfruit (Passiflora […]

Great resource, I live in Suwannee County and my property if full of the wild blueberries…