A Problem with the Grocery Row Gardening System? 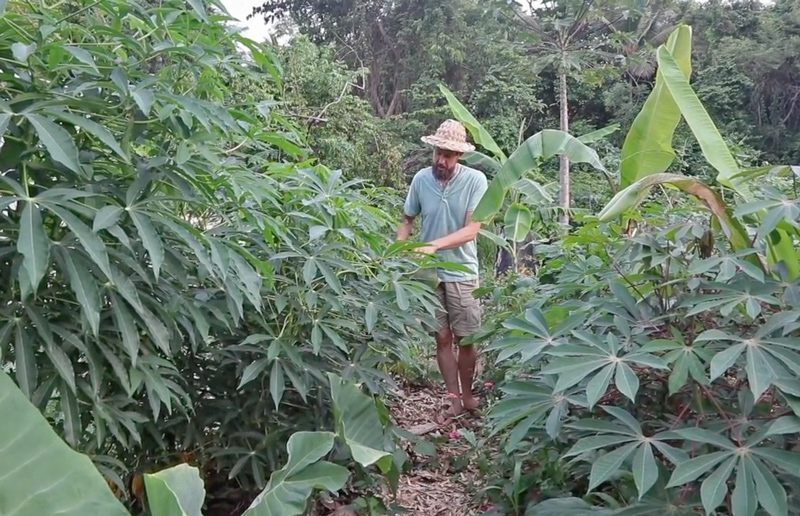 A recent commenter identifies a possible problem with the Grocery Row Gardening system beneath my last post on building humus:

“David – I have an experience that raises serious questions re: the long-term efficacy of your grocery row system. I have a veggie garden in Florida, officially zone 9B (but really zone 10), growing in 4-8 inches of oak leaf compost on top of sand. I let a volunteer papaya seedling grow and it is now 7 feet high (and loaded with fruit). Veggies won’t grow near it due to the shade and aggressive papaya root system. In your grocery row approach, the same thing will eventually happen if people plant trees or perennial vines. The papaya loves the rich, composted soil but the veggies do poorly near it. Your feedback is welcome.”

To which I responded:

“Good observation. I had a large papaya in the system down in Grenada and we grew edible-leafed hibiscus shrubs beneath it without issue. It’s probably going to be a matter of seeing what grows with what. The root system shapes are different on different plants and some can push around each other, and some can’t. I miss papaya up here – too cold, or I would try them again with different species. I know that true yams, for example, do fine even amidst the dense roots and shade of trees. We had one growing in the thick roots of an orange, and another beneath a dogwood – they just jam in around them, sometimes breaking into pieces when harvested, but still giving decent yields. But I’ll bet softer annual veggies would not do the same. If you figure out and plants that work well, please share your experiences. I would love more data points as we experiment with the system.”

My short book on Grocery Row Gardening asked for input on the system. It’s an idea I put together after years of experimenting with orchards, edible hedges, food forests and annual gardening, and is also based on the work of many other great gardeners, including Ernst Goestch, Stefan Sobkowiak, Geoff Lawton, Andrew Millison and others. In writing the short book, I deliberately put my thoughts out there and how I planned out the system to see what we need to do to make it better. 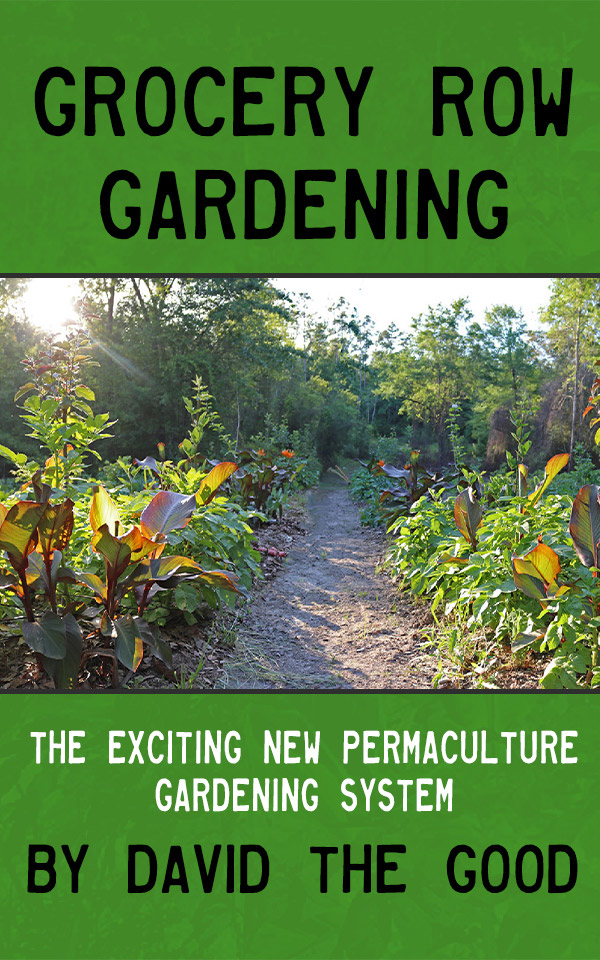 Unlike my other books, I wrote this book to share a work in progress and to invite others to join my in my research.

With the experiences of other gardeners and backyard scientists, we’ll be able to see what works and what doesn’t. My current Grocery Row Gardens are only a year old and therefore are not a mature system. My tropical Grocery Row Gardens were also short-term, as we were forced to move thanks to the pandemic. We gathered a lot of information, however, due to the tropical climate and excellent soil. Polycultures evolved very quickly, as you can see in this video of the system less than a year after I started planting:

Fruit trees and vegetables are bound to fight each other a bit for space and resources, as as they do, we’ll learn which combinations work and which don’t.

Man, I miss those bananas.

Our initial Grocery Row Gardens were spaced out with 2′ pathways between 4′ wide beds. Experience revealed that that wasn’t quite enough, so we upped the path size to 3′ on our Alabama incarnation of the idea.

Here’s another small problem we found in 2021. As shown in the photo below, the cassava in the left bed shaded some young pomegranate trees last year, which certainly slowed their growth. 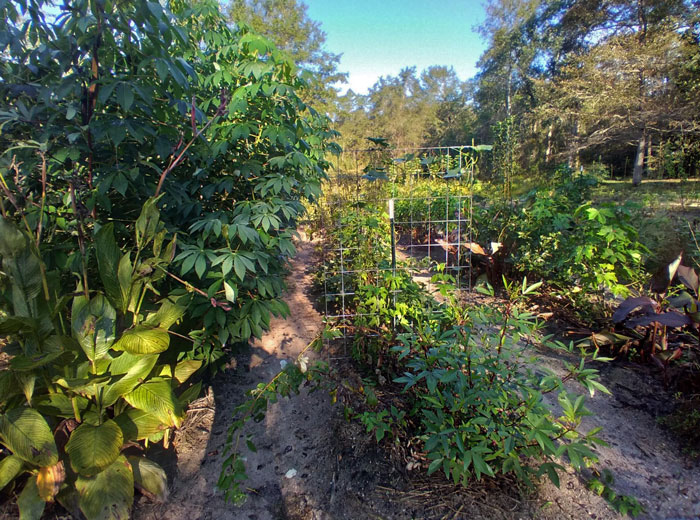 It happens. This year, I will plant the cassava farther apart, perhaps in rows between the main fruit tree rows.

This isn’t the first time challenge we’ve had with vigorous cassava. Some years ago I planted cassava and sweet potatoes together to see if I could grow both an overstory and an understory root crop together. What happened was that I got great big cassava plants that did well, with a few tiny sweet potatoes mixed in, as the shade of the cassava overwhelmed the vines beneath. It didn’t work well! Yet in Grenada, I saw cassava and sweet potatoes growing together just fine and yielding together, with occasional yams and bananas mixed in.

Here’s a picture of a farm that has sweet potatoes doing well beneath plantains, in a similar arrangement. 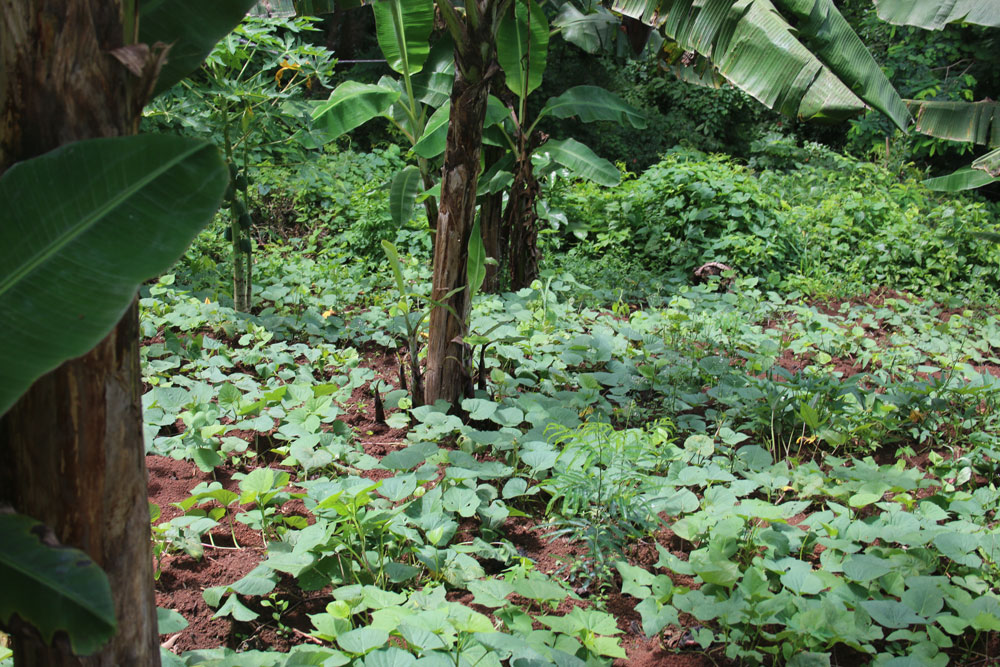 What I discovered was that I had planted too closely. Wider spacing was working just fine for farmers. They also planted a shorter variety of cassava, instead of the massive Indian type I grew, which easily reached 10-12′ and branched all over, casting dense shade.

There is a much shorter cassava variety we grew in Grenada that I haven’t been able to find here, but it would have worked much better. Those were only about 3-4′ tall at harvest time.

In my current gardens I did well in 2021 with growing potatoes and sweet potatoes underneath peaches, pears, apples and other trees… but they were brand-new and small, with root systems that were just getting established. We’ll see what happens in 2022 as everything wakes up and takes off in spring.

It’s a very exciting work in a progress. As I wrote in my response, some things do great beneath trees; others do not. I had grape mahonia growing and fruiting beneath dense oaks in North Florida whereas my vegetables would not have tolerated the roots and the shade. Unlike those oaks, however, the fruit trees in Grocery Row Gardens are going to be pruned heavily. Will that constrain the roots? Will we have to adapt our species to make working plant guilds? I’m sure there will be plenty of tweaking.

As for the papayas, I planted them on purpose in my first Grocery Row Gardens, because they grow straight up and produce rapidly. Their columnar nature puts them well above the other crops and allows me plenty of planting options beneath them, and their fast production gives the gardener food as he waits for his longer-term trees to produce.

I put them into new beds: 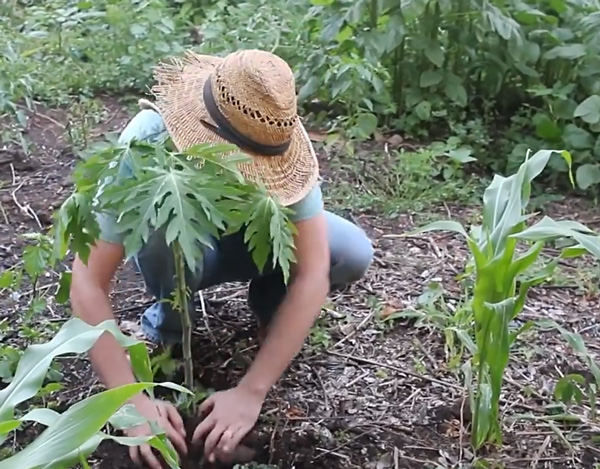 And grew around an older tree already on the land (see the huge tree, back right):

That tree is the one I grew hibiscus beneath. It’s behind Rachel in this picture: 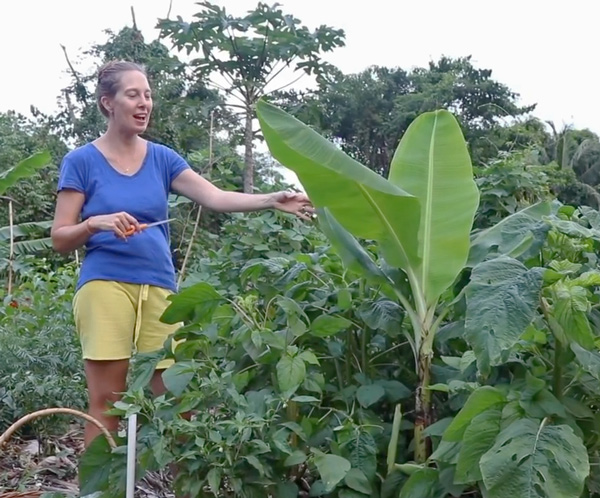 It’s just a matter of getting the right guilds together.

As the data rolls in during the coming years and people share their experiences alongside my own experiences, we’ll be able to see results and learn from them. I know greedy papayas won’t beat everything, but as the commenter’s experience shows, not all combinations will work.

Discovering what does is part of the adventure.

Composting Secrets from a Humus Junkie

Working in the Little Row Garden

Helping Life Arrive in Your Garden

We are really hauling in the produce now!

I have enjoyed the book (several times) and in the process of preparing the bed and planning what I will be planting in the short row. And possibly re-doing the row I started last year.

Wishing you could get a tall greenhouse or row tunnel for those bananas. Bananas are my favorite and cannot imagine just walking outside and banana trees everywhere.

It it amazing to have them. The cold cuts you off from some of the most productive plants in the world.

You are north of me by an hour. I experimented this year by wrapping a 10 ft papaya with heavy row cover. The tree maintained green top growth and green fruit thru many 30 degree nights. When the weather called for temps in the 20’s I added a wrap of plastic. Big mistake, moisture became a problem so I removed the plastic. I’m happy to report the tree is now unwrapped and yielding new top growth. It might be worth a try for you especially if you have a spot with a large tree canopy Mico climate.