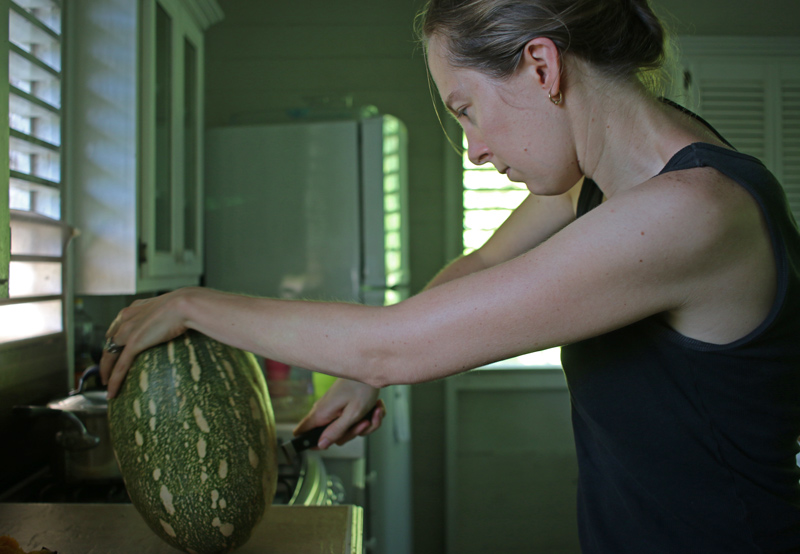 Our friend with the bamboo greenhouse gave us one of his land-race pumpkins as a gift.

He collects varieties of squash and pumpkins and plants them together on the side of the mountain. The slope is quite difficult to navigate for mere humans, but the pumpkin vines do fine.

By the way, I took the photo of Rachel above candidly with a neat little lens on my Canon. Not expensive as lenses go, but it lets in a lot of light and I use it for videos and indoor photography in particular.

It also has a nice wide angle, and takes great close up shots. It’s not as quiet on auto-focusing during video as I would like, but I suppose I have to forgive it.

I am waiting on a few new lenses that will allow me to go even deeper with my videography and photography. Unfortunately, because they’re imported I basically have to pay for them twice: once when I buy them in the US and again when I pay a chunk of tax on them at import. Ah well, it will all be worth it.

I filmed a video on Wednesday where I travel down the hill to visit my first experimental pumpkin hill… more pumpkins started from seeds from my farmer friend.

I can’t do much in the way of weeding or string-trimming right now as my cast makes it impossible, but I am determined not to let the jungle eat my pumpkins like it ate my cucumbers.

Soon I will be better. Three weeks and three days until my cast comes off. Then I am off to the races. The land-races!