The problem with monoculture farming as illustrated by citrus 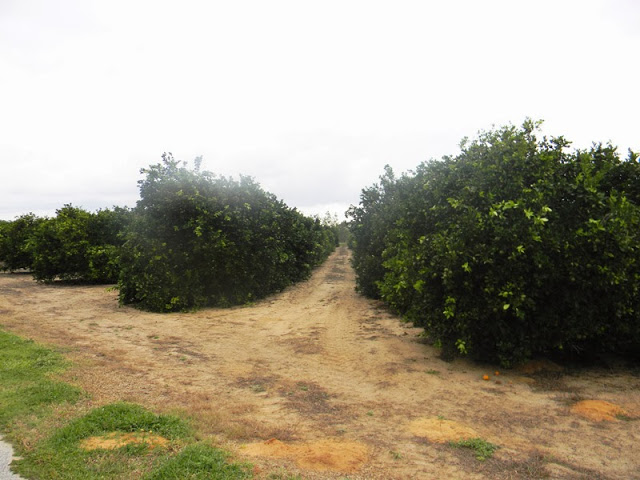 So – what’s the problem with monoculture farming? Citrus trees in beautiful straight rows: they look great, but underneath the order there is a problem with monoculture farming

It’s easy to take care of a straight block of corn… or blueberries… or apples. So – what’s the problem with monoculture farming? The problem is that over time you end up with unexpected problems – and that’s what we’re seeing right now in the Florida citrus industry.

This state has overflowed with oranges for a century. We’ve got a great climate through the southern half of the state that allows citrus to produce richly colored sweet bounty that’s just perfect for shipping up north to your sad, pale, scurvy-ridden Yankee relations.

However, our entire industry is now in deep trouble. Though you wouldn’t know it by driving past thick, green groves, there’s a major battle going on. Florida citrus survived being battered by canker… but now faces the threat of extinction thanks to “greening.”

When anything is planted in large blocks, close together, across vast swaths of acreage, it become a target.

Think European cities during the Black Death. Lots of folks packed together under less-than-ideal conditions suffered and died from a horrible disease. Many of those who lived in the country were spared.

There’s a reason God designed forests the way He did. There are lots of layers, lots of distractions for pests, and lots of attracting and repelling interactions that take place in a way we barely understand. It’s rare to see a large block of anything in nature (when you do, it’s usually a sign of poor soil or particularly harsh conditions).

Scientists are working on new, genetically engineered oranges that aren’t susceptible to greening. Creepy, but there may not be another solution other than burning everything down and starting over.

There’s no easy way out of this one.

Avoid packing like things together, however, and you will avoid the problems with monoculture farming.

Harvesting Before Frost
Improve Neighbor Relations with These Tips for the Edible Landscape
Yeah, so this thing was way too hot
Guerrilla Gardening for Survival: Possible?
How to Tell a Seedling Citrus from a Grafted Citrus

I've been gradually coming to peace with the idea that I might have to give up oranges.

You could get a earth bermed or Walipini greenhouse and dwarf citrus trees and an olla or drip watering system. Trifoliate orange is a citrus which can tolerate cold but the fruit has lots of seeds so is only good for juice or citrus aid.
http://www.treehugger.com/green-architecture/build-underground-greenhouse-garden-year-round.html
http://www.permies.com/t/6987/wofati-earth-berm/Walipini-greenhouse

Yeah – the trifoliate orange fruit tastes absolutely horrible, but the trees are gorgeous.

I found it ironic in the article about citrus greening that absolutely no one is discussing planting alternate crops in the affected areas. I suspect something like peas or beans would do well

Yeah. It's a conundrum, though. I've driven past the large plants for orange processing… seen the camps of field workers and visited the grove-front fruit stands. The trees are the basis of entire economies that don't shift easily.

Yeah, I understand. But if I owned 2500 acres of groves and 10% of them were bad enough to just abandon them, I'd start thinking about what else could be done. Maybe there's an opportunity there for some enterprising young farmers.

Totally. But, of course, MPAI.

Yankees can make rose hip jelly or pine needle tea for vit C post collapse. Goji berries have lots of Vit C and antioxidants and can grow in zones 5 to 9, and most looters wont recognize them as edible.

Yes, that’s true. We grow gojis here. Further south, we can pull off Barbados cherry, also known as acerola cherry… the one they use for vitamin C capsules. Tastes great, too.

I van wrap my head around diseases occurring naturally due to poor farming practices. However it seems this could be natural so its whatever. Nature takes its course blah blah. I might be a nutter but it wouldn’t at all surprise me if this disease was engineered to devastate this huge non GMO industry that makes/made tons of money without the need for biotech industry. Now they’re rushing to gm engineer citrus to “save” the industry…wink wink nudge nudge…and now Monsanto or others get more out of it than just the chemicals now…makes one wonder. However I’m nuts so I’m probably reading between lines that ain’t there but maybe…

Now that’s a thought crazy enough to be possible. Hmm.