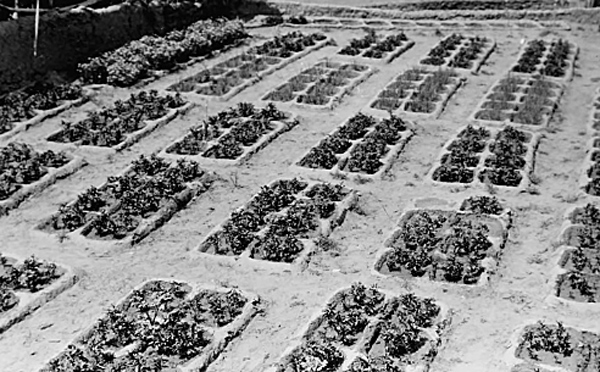 Last week The Grow Network posted an article on Pueblo farming methods which included a video on “waffle gardening.”

Though the video doesn’t have much practical information, it did point me along a new line of research with its reference to waffle gardens.

This is not a method with which I was previously familiar, though I have encountered other water-saving kitchen garden techniques including sunken beds and zai pits.

I found a further post on the method, which has this food overview:

“Since the time Zuni was inhabited their survival was dependent on what the land provided. They developed different types of farming methods that enabled them to contest the variable water availability and inadequate soil quality that is common in desert soils. These methods include terrace gardening, a type of farming that allowed them to use the hillslopes of the mesas to divert water among several stair case terraces. On a larger scale is a type of agriculture known as dry-land farming or run-off agriculture which farmers used to grow important staple crops such as maize, squash, beans, and cotton. These agricultural fields were strategically placed on alluvial fans, which allowed farmers to capture and divert runoff and nutrient rich sediment from upper watersheds (Homburg et al.).

On a smaller scale, “waffle” gardening was maintained by each household.”

And the author follows by describing how she built a waffle garden of her own.

If I were in a low rainfall climate, I’d experiment with waffle gardens. Unfortunately, I can only live in one place at a time.

Marmalade and Campari: The Steve Zissou Citrus
David The Good’s Secrets to Growing Better Produce
The Aquaponics Non-Miracle: Why Has this Complicated Mess Endured?
All You Need for Florida Gardening Success
New Videos Incoming and Lots of Work to Do
0 comment
PinterestWhatsappEmail

My Appearance on the Live Free & Grow Podcast

You Can’t Buy Food This Good