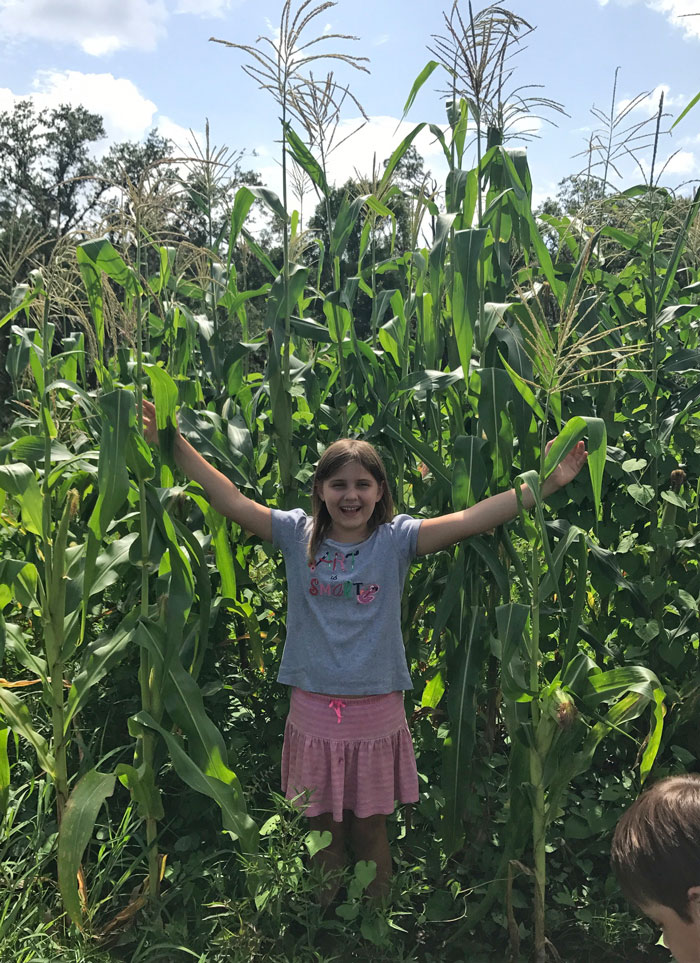 Today I thought I’d share some recent pictures from readers.

First, here’s a shot from Spencer, who is pushing the zone with pineapples under oaks (though he’s in South Georgia, we’ll let him into this post): Spencer also sent a shot of himself with his first Sugar Baby watermelon: Heck yeah, man. Nothing like homegrown melons. He told me that was an early, early one which ripened small, before all the rest.

Spencer also has done well with tomatoes this year: That’s just not fair. Tomatoes never do well for me. Thanks for the pics, Spencer.

Brian sends in a picture of a homegrown Seminole pumpkin: Nice thick neck on that one. Good work.

And on the topic of pumpkins, Greg writes in with some big Seminole pumpkin success of his own.

“Last year I took your advice about survival crops after reading one of your books. I then purchased various heirloom seeds from Baker Creek seed company. One of the seed varieties was Seminole pumpkins. I was VERY impressed with these seeds, they are tough! I grew them last summer(2017) with little irrigation or amendments in the harsh middle Georgia summer. My pumpkins were small and hourglass shaped. As you can see from the picture of my then 3yr old son standing in the kitchen.” “I gave my sister a few Seminole pumpkin seeds. She sowed them at the same I did but in the pile of lawn clippings at the edge of woods her front yard. She watered them when she thought about it and she never amended or added fertilizer. Her pumpkins grew to an enormous size as you can see with my son on her front porch.” Seminole pumpkins are my favorite pumpkin, which is why I recommend them so highly in Totally Crazy Easy Florida Gardening. They also love to grow from compost.

And speaking of Totally Crazy Easy Florida Gardening, here’s my friend Holly growing snake beans (another one of my recommended crops) in a rather unique way: Snake beans are really easy to grow and highly productive. And what better use for a canopy-less umbrella than a bean trellis?

Meanwhile, in Fort Lauderdale, my mom sent me pictures of the Barbados (Acerola) cherry tree which is now recovering from being smashed to the ground during Hurricane Irma. After the storm, the tree was broken off at the ground, half the roots snapped off. Mom asked me what to do and I recommended cutting off the tree at about 2′ tall, then propping it back up and praying it would heal. My brother-in-law took care of it and it looks like that did the trick.

Dad and I planted that tree just a few years ago and it’s already been a massive producer of cherries year-round. My nieces and nephews love it, as do the children visiting my mom.

Vicky also had issues with almost losing trees in storm damage. She writes:

“I don’t know if you remember emailing me & told me not to smear anything on the wound of the neem tree. I didn’t even cut her back. My husband staked her & countless other trees up, we said a prayer and look at her now!” Vicky also sent me a picture of her Tabasco peppers after seeing this video:

Vicky writes: “Here is a snap of Tabasco peppers growing in my yard. They look very similar to the ones you have.” What fun. And what huge, huge flavor they have.

And speaking of huge, let’s look at some huge corn. “Hickory King” is a BIG corn. 12′, sometimes. I’m getting ready to plant some of my own now that the rain is starting to come. One of my favorite varieties.

And speaking of favorites, here’s one of my favorite ladies proving she has excellent fashion sense: Last but not least, Scrubland Avenger’s son has picked up a new hobby: Thank you all for sending in your photos. Keep ’em coming, and have a wonderfully productive summer.

Day 16: In which I finally bust out the Planet Whizbang wheel hoe

Wild Amaranth vs. its Cultivated Cousin and Other...

A Reminder for All of Us

“Everything you need to know to grow your...

Aside from cooking herbs, we planned our “garden” as a bird sanctuary. So I can’t really show my triumphs without disturbing the nests 🙂 …Though the dead fluff from raptor attacks is proof that we’ve developed a happy, dense prey layer.

However, 10 years ago I planted a pin oak and an heirloom, own-root rose with the goal of getting a tree that “bloomed roses.” This was the year we finally pulled it off! “Mom… does that tree… have flowers?”

I am working on crossing seminole pumpkin and atlantic giant pumpkin to increase the fruit size. Are they compatiable to cross? Ive never tried anything like this before. Any tips on this experiment?
I really enjoyed seeing everyone’s sucess in the garden. Keep it up folks!

To Spencer in South Georgia:
I was floored – and excited – to read that you’re growing pineapples in the ground in South Georgia. I would love to try this here in the Florida Panhandle. I have a couple of questions, if you wouldn’t mind.

*Do you use any winter protection – like covers or supplemental heat – for cold snaps?
*Are you growing a special variety, or did you just save tops from store-bought pineapples to get started?

I would love any other tips. Thanks so much!
Laura