The Effect of Pottery Shards in Terra Preta 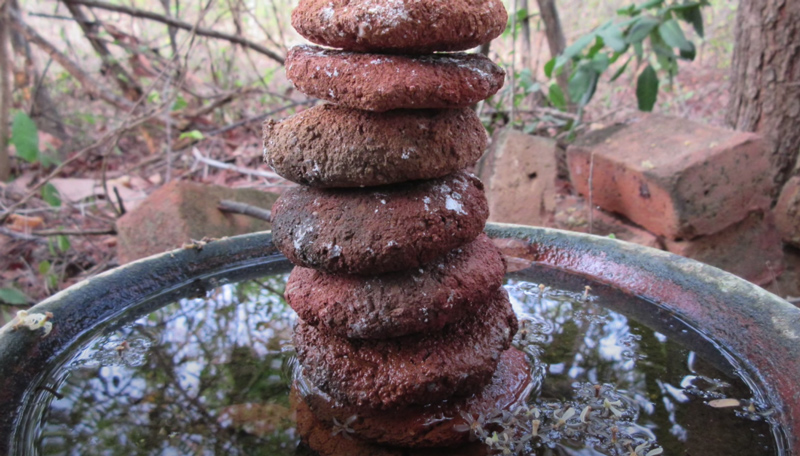 Why are there pottery shards in terra preta?

When I did my video on my attempt to recreate terra preta, many people wondered what role pottery shards played in the original mix.

Here’s my video on our attempt to make terra preta:

“Why add broken pottery?” I was asked.

Perhaps the pottery shards were incidental, and not part of a plan to improve soil. Heck, maybe terra preta itself was a complete accident of primitive waste dumps.

Or maybe not. We don’t know anything for sure about how terra preta was created. We just know that it stays rich and fertile centuries and that it contains bones, pottery shards and charcoal.

I added all three to my mix. Without an understanding of “why,” sometimes you just have to “do” and see what happens.

This morning I received an email from Jordan that appears to fill in one piece of the puzzle: the ubiquitous pottery shards found in terra preta soils. They do have a use!

The Effect of Pottery Shards in Terra Preta

I’ve been making biochar for a while now, and studying terra preta profusely. Pottery shards are a key aspect often overlooked, but they are hard to come by in abundance.

He attached this video, demonstrating how the use of pottery shards effects terra preta:

We’ve been digging a retention pond to stock fish, and I now have plenty of soil. I’ve made pottery clay a few times now. I roll it into long thin strips and put it inside my bio char retort, and usually by the time I have char, the clay has been fired, and being rolled long and thin it’s cracked and shattered down to a good soil aggregate size, ready to use.

Sounds like a simple method that anyone could do at home. Someone in the comments of my video on making terra preta noted that the plants growing on top of a pile of old bricks did much better than those growing without bricks. Can you imagine? The first thing most of us would do in our gardens is to take out the bricks!

In the video Jordan sent, a group of people make clay patties for their soil with low-tech methods, probably not dissimilar from how the Amazonians created their pottery.

At the beginning of the video, the wicking of water up a clay brick is shown, leading to the germination of a seed which then proceeds to grow healthily despite its very tiny amount of soil. 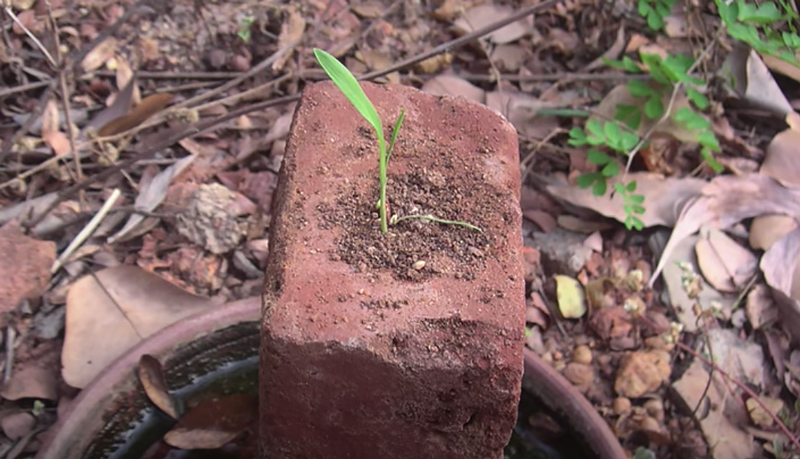 From there, it progresses into the making of low-fired clay patties to use in terra preta soils.

First, two women take dry clay and smash it down into powder, removing stones as they go:

Then water is added to the dry clay mix and kneaded by hand. 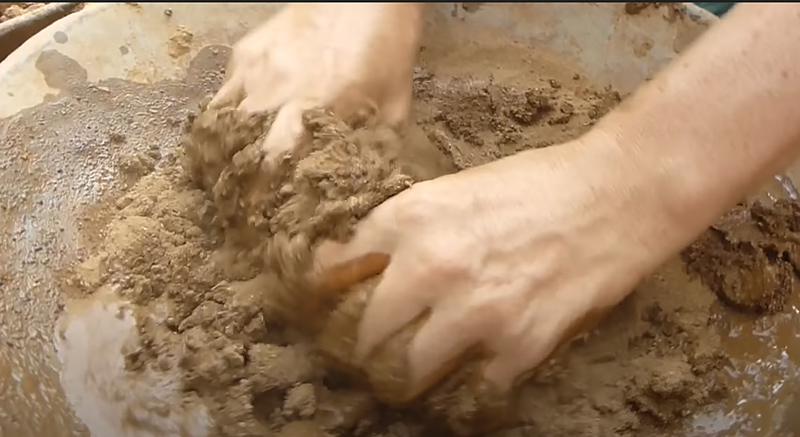 After the clay is at the right consistency, small handfuls of it are pressed into clay patties and set aside to dry. 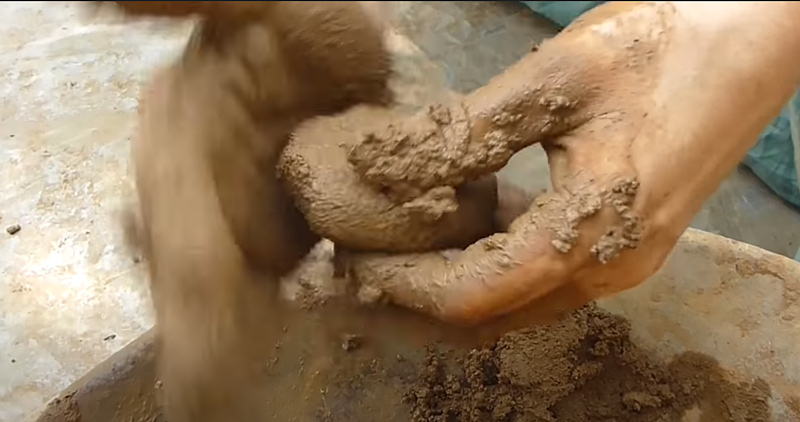 After drying, these patties are placed into a pyre of dry wood, which is then lit. 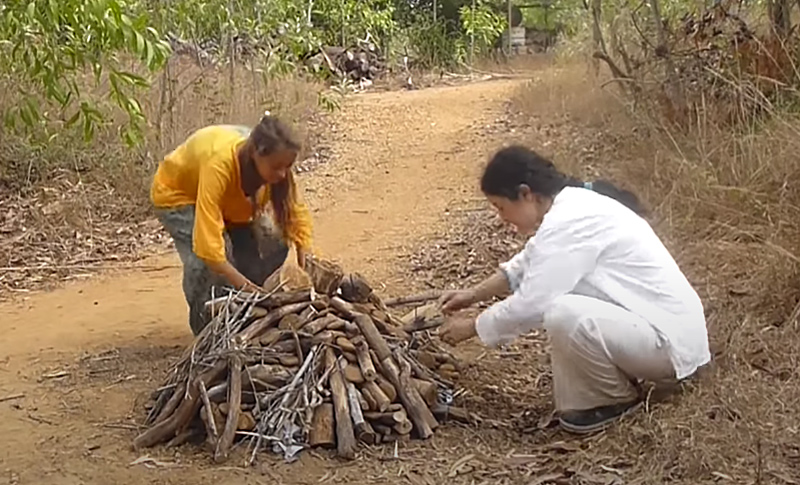 When the fire burns out, the resulting fired clay patties are removed to be used as a soil amendment in creating terra preta. 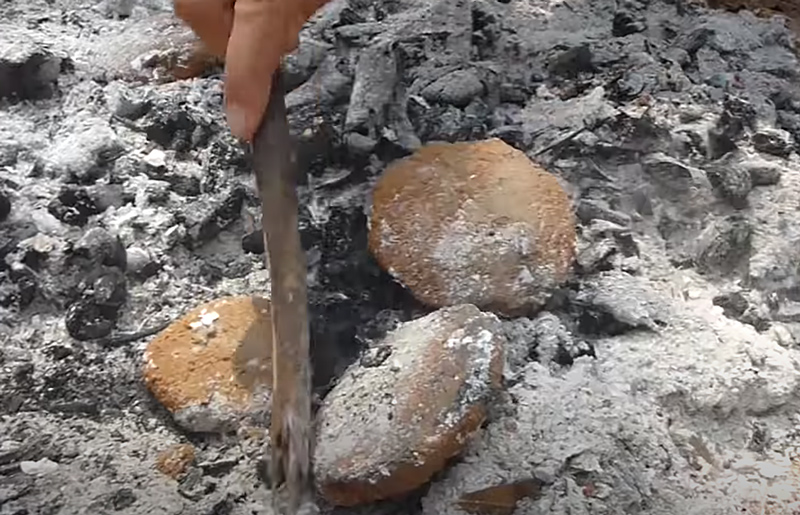 At the end of the video, the wicking power of a stack of fired clay patties is shown:

So why are there pottery shards in terra preta? The most obvious answer is for their wicking effect. The shards almost act as sub-soil irrigation, moving water through the root zone of plants and making it easier to access.

I have a bed out in the garden that needs some work to bear better crops. The garlic I planted in it last fall did poorly, so I’m going to re-do the bed with lots of amendments to improve it for this coming fall. It’s obvious now that I need more clay. I’ll get the kids making patties, plus I’ve got some bisque-fired pottery shards from a local pottery studio I can add. Heck, maybe I’ll even throw a few bricks in it. There are old bricks scattered all over the yard.

Stay tuned. We’ve got experimenting to do.

“Thank You for Saving My Garden”

Have you seen any reports on the number or amount of pottery shards in terra preta?
I’ve seen footage that showed scattered pieces, but never any studies to quantify it.

Awesome article, David! Do you throw the cakes in whole of break them up a bit? i may redo my annual beds this fall, in this style, and see what happens. It is way too hot to do it now. Just walking around taking photos of my beds and food forest had me drenched. The air is so thick from the humidity down here in Grand Bay, AL.

I would probably break them up.

No question, nothing of value to add. Just wanted to say I live your videos, been watching a long time I always learn something and you’re funny sometimes too!

Papa Bailey was 105 years old a friend of mine went to see him, he wasn’t home but my friend saw that there were lots of small stones in his garden bed so my friend decided to “help” by removing them.. When papa Bailey arrived he asked why they were moving the stones. My friend said that is what they had always done. Papa Bailey said they are important they attract and hold the morning dew and they help get the air to the roots. I am sure the pottery sherds have an important role too

Haven’t watched your video yet Dave (been crazy), however I just want to point out that heating clay soils above 200°C changes their structure enough to transition many soils from being dispersive that don’t hold onto nutrients and erode away, to swelling/slaking soils that maintain aggregates structure and porous surface area for nutrients and microbial life. See Rengasamy in the following video for the science, this is why I believe pottery helps and that the next big gardening fad will be baking soil in your oven. 🙂 https://youtu.be/RNFdo6YNsSE?t=2216

Good to see you around again! Thank you. What a fascinating idea.

Would adding bentonite powder have the same effect? Or would I be better off baking the bentonite clay into patties? Thanks

The clay acts differently when it isn’t fired. Both have uses. If you want the shards wicking effect, you would have to fire clay.

Wow, that blew my mind when I realized the bricks were pulling up so much water, even wicking it through multiple individual clay patties! I had no idea clay could do that! You mentioned that it has to be fired to give it those properties. I wonder how the properties of fired clay differ from those of unbaked, clay-heavy soil. Is there a chemical change? Or is it more mechanical or morphological, eg the removal of stones, plus the compression, plus the drying to cause multiple solid clay structures, which then behave differently from particulate clay. I would love to do an experiment growing with different physical forms of clay, say, solid (like the clay patties in the video), unbaked powder (like what the women were hand-mixing), baked powder (smash some clay patties and grind them back into powder), and maybe unbaked powder with the rocks still in it.

It is worth trying!